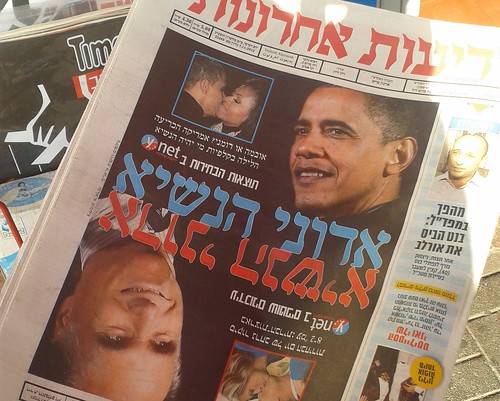 President Obama won his reelection. And while American Jews supported him just as much as in 2008, there is one Jew who very publicly backed the losing horse: Israeli Prime Minister Binyamin Netanyahu.
Officially, Netanyahu said in a short statement that he will “continue working with President Obama in order to safeguard the interests crucial for the security of Israel’s citizens.” Netanyahu stepped boldly into American electoral politics by appearing with Romney and participating in Republican ads in Florida.
But while Netanyahu was mum, members of his Likud party offered bluntly disparaging statements. At least, that is, until the Prime Minister’s office demanded press statements be in line with their party leader. MK Danny Danon said, “The State of Israel will not surrender to Obama. We have no one to rely on but ourselves,” obviously forgetting an annual $3 billion of US aid, several UN Security Council vetos recently, and a 1,000-soldier US military drill conducted on Israeli soil a week ago.
Few voices are predicting whether a strengthened President Obama will take new aim at Middle East peace or demand tougher concessions against Netanyahu’s government. Tony Blair may be one. The Palestinians are not. But nobody is suggesting that Obama will forget what Netanyahu attempted to do. Already Netanyahu’s opponents are lining up to make the most of it. (Ynet posted a comprehensive round-up of congratulations by each of the major Israeli parties and electoral contenders.)
How could an invigorated Obama presidency send a signal to Netanyahu? Here are a few unlikely options that are nonetheless interesting to imagine what’s truly at stake for Netanyhu:
First of all, he could visit Israel. Preferably before the January elections and to hold photo ops with all the party leaders who support a return to two-state negotiations — Zehava Golan of Meretz, Shelly Yachamovich of Labor, as well as what becomes of Ehud Olmert, Tzipi Livni, and Yair Lapid. And if Bibi wants his photo op, no doubt he can have it while sharing it with Palestinian Authority President Mahmoud Abbas.
Second, he could opt to support the Palestinian Authority’s bid for non-state observer status at the United Nations. Or at least, not oppose it. Abbas congratulated Obama’s reelection while simultaneously lamenting the US’ lack of support for their upgrade. The international cache gained by the US would no doubt be useful in further actions against Iran’s nuclear program in the same forum.
Third, he could put an American proposal on the table for final status agreement with the Palestinians, putting Netanyahu in the position of fighting both his own stated agreements and the President at a time when showing no daylight between the administrations is crucial to Netanyahu’s election.
Would any of this backfire with an outpouring of Israeli support for Netanyahu domestically? According to everyone, Netanyahu will be reelected Prime Minister, but by coalition math and not by popular affirmation. By how much will he win is the question, and will new centrist parties take enough of a bite of his share to beg their inclusion in his new coalition. The left will not be in any power in Israel’s next coalition. But faced with an American administration centered on finishing negotiations, there may be reason to privilege centrists’ inclusion instead of anti-negotiation parties.

And The Award For Tackiest Fundraising Message of 2009 Goes To…