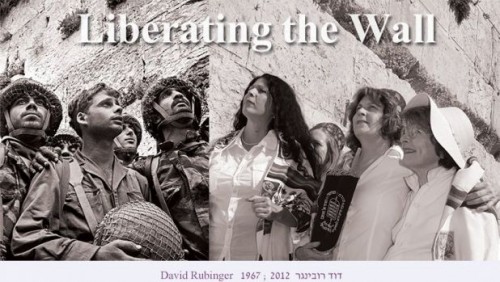 This morning in Jerusalem, the Women of the Wall brought heavy Israeli symbolism along with 150 participants to their monthly peaceful protest — three of the IDF veterans who captured the wall in the 1967 war. All went uninterrupted for the first time in 22 months until they departed through security, where nine women were separated and detained. Those included Anat Hoffman, Rabbi Susan Silverman (sister of comedian Sarah Silverman), and Rabbi Silverman’s daughter Hallel, and eight-month pregnant rabbinical student Lior Nevo.
Quoted in the Jerusalem Post, Ilon Bar-Tov, a paratrooper who fought in the Old City battles, “It’s unacceptable that the police are stopping women from wearing tallitot, it’s like Iran. I can’t believe they are stopping people from praying one way or another.”
Although the term “liberating” the Western Wall is hard to borrow, the symbolism is obviously aimed at Israeli mainstream ears. The iconic faces of these paratroopers grace every postcard stand and Jerusalem Day poster since the event itself. Their names are nearly household. Petitions submitted to the Supreme Court are challenging the all-haredi representation on the board of the plaza’s governing body, the Western Wall Heritage Foundation. All denominations and the secular public should be able to participate in the decisions affecting the plaza, they argue.
And it’s working to force the Israeli government to pay attention. In late December, Prime Minister Netanyahu for the first time acknowledged the unsustainable status quo at the plaza. The American Reform and Conservative movements, along other diaspora women’s groups, have stood solidly behind Women of the Wall. The most previous arrests of Anat Hoffman pushed even the Jewish Agency board to demand a change. The Prime Minister asked Jewish Agency head Natan Sharansky to “look into the matter” and report back after the elections. Hearing that, ultra-orthodox extremist groups deplored the presence of “Zionist occupation” and “whores” at the Wall.
Do the government utterances of “unsustainable status quo” and “look into the matter” strike you as similar to another conflict in the region?

I'll tip my hat to the new constitution

From Moishe to Moishe, there's just no one like Moishe

A Woman's Place is in the Sukkah