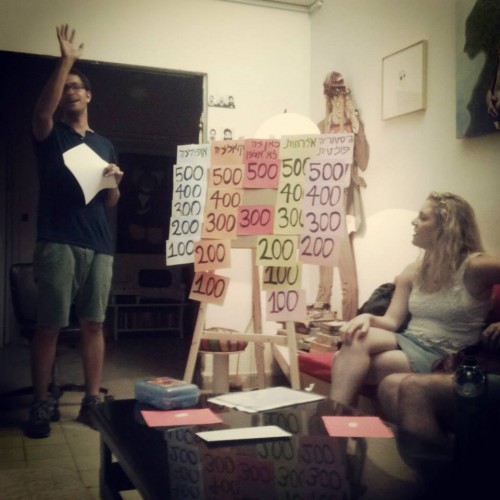 While I deeply love learning Hebrew, ulpan often hurts my heart. I can’t help but bristle at prejudicial Israeli attitudes that go against the anti-oppression work that bring many of us there. Be they prejudices against Arabs, Jewish religion, President Obama or anything else, most of ulpan classmates take on those prejudices without question. Sadly, even enthusiastically.
Truthfully, the successful Hebrew ulpan model began under the need to assimilate huge numbers of immigrants and forge collective identity. Its very purpose was to be doctrinaire. But today, it’s apparent that parts of this model are inappropriate for the needs of some. American Jewry especially has the highest failed emigration rate, due in part to the values and worldview gap between how Israelis and Americans see society. Better dialogue between Israelis and American Jewry is crucial these days, so why would we want to enter a learning environment aimed at assimilation and affinity-building instead of engagement and equal exchange?
That is why this past year a group of American and Canadian learners banded together in Tel Aviv to launch This is Not an Ulpan, the first explicitly lefty Hebrew learning community. Started by Karen Isaacs, Itamar Manoff, David Kandel, Linda Leder, and Daniel Roth, the endeavor explains of itself, “The root of the word ‘Ulpan’ is the Aramaic word for bull, and denotes a place of taming…This is NOT an Ulpan.” And it’s attracted an award, a Haaretz mention, and nearly 100 students in two semesters.
Classes are offered through the framework of nonviolence and anti-oppression, such as beginners “When Chomsky Met Ben Yehuda,” intermediate “Army and Society” and “Feminism,” and advanced “How Do You Say Nakba in Hebrew?” This summer they’ve offered expanded classes on Israeli film and politics. Films and guest speakers introduced the plight of African asylum seekers and modern-day kibbutz models. The participants were all looking for a complementary critical angle on Israel — certainly not your typical aliyah or study abroad bunch.

Daniel Roth explained more at length for the blog Waging Nonviolence, “Too often, language programs expect learners to act as depositories for information about what is right and wrong, good or bad, done and never done in Israeli society. But our program model is built around the idea that it is imperative that we rethink this training-method of language study, and this goal of absorption into a society, and replace it with dialogue instead. Participants are asked to think about how to fix the problems in the society rather than learn to accept them.”
I asked Roth what they’ve all learned as they enter their third semester: “This is truly needed. Hebrew language is something we are seeking and critical analysis of our society, language and culture and politics is deeply desired. That’s what we are building and what we hope to make available through this way of engaging in education.”
Convening weeknights as it does, the program may not totally stand in place of a regular ulpan. But as a more thoughtful immersion in the reality of Israel and a community of fellow Hebrew students who care about social justice, it’s a breath of fresh air. And quite possibly, this Hebrew learning environment will help progressives engage with Israelis about the issues they’d rather ignore.

From Anti-Zionism to Settler Post-Zionism