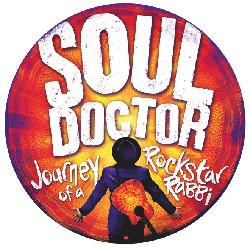 Have you ever had the experience of introducing your high school friends to your new friends from college? That’s the best way to describe how I felt watching Soul Doctor, the new Broadway musical based on the life and music of Shlomo Carlebach. Throughout the show, staged in 3/4 thrust at the intimate Circle in the Square, I couldn’t keep myself from looking across the theater at the faces of my Catholic friends and wanting to explain, or apologize, or forget they were there so I could give myself over to the music and ecstatically clap along with the rest of the mostly-religious, Jewish audience (based on the number of kippot and wigs in evidence).
Because here’s the thing: if you’re reading Jewschool, you, like me, probably love Carlebach’s music. You might not even realize how much of it you love — I kept finding myself surprised at melodies employed in the show. How could one man have possibly written so many of the melodies that have underscored every Jewish experience of my life, from the synagogue to the campfire? And even when saddled with second-rate English lyrics and a hopelessly inert story, when sung by a terrific cast of Broadway babies (led by Eric Anderson as Carlebach himself and newcomer Amber Iman making a splash as Nina Simone) backed by a fantastic band under the baton of Seth Farber, the music wins out, and I found myself unconsciously tapping my feet even as I rolled my eyes. 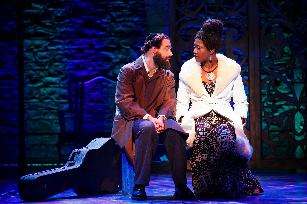 I can already hear you asking, “What do you mean it’s an inert story? Carlebach’s life was full of drama!” Perhaps, but you’d hardly know it from this show, which structures the entire first act around the conflict between Carlebach’s father’s misnagdic background and Shlomo’s (and his brother Eli Chaim’s) attraction to Lubavitch chassidus. (Yes, Rebbe Schneerson makes an appearance, clad in a white, sparkly sparkly kaftan looking like a fabulous Eastern European disco Santa. How I wish an image of that costume had been included in the production photos.) At the end of act one, I felt like I had whiplash from the sudden shifts from kitschy celebration of yiddishkeit (sexy chorus boys as dancing yeshiva bochers!) to melodramatic tear-jerking scenes invoking the Holocaust. Act two is about… Um… Well, it covers Carlebach moving to San Francisco and opening the House of Love and Prayer, fighting and reconciling with his family, and performing in Vienna, the city he fled in his youth to escape the Nazis, which might have been moving had that moment not also opened the show.
What the show doesn’t cover is any hint of the allegations that Carlebach abused and/or harassed dozens of his female followers, first aired in a 1998 Lilith Magazine article. In fact, despite quite effectively dramatizing Carlebach’s move from observing negiah, the laws prohibiting men from touching women other than their wives, to performing for mixed crowds and hugging his followers, the show would have you believe that Carlebach was celibate. (Despite the involvement of Carlebach’s daughter, Neshama, in the creation of the show, the musical’s narrative ends before Carlebach married and only hints at the possibility of future romance for the rabbi.) I can’t imagine a celebratory musical about any similar figure without there being massive protests outside the theater, although I guess the Cirque du Soleil Michael Jackson show has been touring without incident. When the New York Times asked writer/director Daniel Wise about this curious omission, Wise responded “He hugged and kissed everyone, men and women. He was a puppy dog, not a predator.”
Whether you want to spend money on a show celebrating Carlebach is a debate best left to the comments section — my ticket was compliments of the show’s PR team. Whether you want to spend Broadway prices on a show that seems better suited for a tour of second-city JCCs and Jewish summer camps? Well, I think you know where I stand on that question. But I will say this: on my way out of the theater, I was strongly tempted to buy a Soul Doctor t-shirt, because I felt like I needed some proof that what I had just seen had actually happened on a Broadway stage.
Soul Doctor has music by Shlomo Carlebach, book and direction by Daniel S. Wise, lyrics by David Schechter and choreography by Benoit-Swan Pouffer. Performances are Tuesday and Thursday at 7pm; Wednesday, Friday and Saturday at 8pm;
Wednesday and Saturday at 2pm; Sunday at 3pm. All tickets are $135 (which include a theater facility fee) and can be purchased now through www.telecharge.com, by calling (212) 239-6200, or at the Circle in the Square box office. Circle in the Square Theatre is located at 1633 Broadway, entrance on 50th Street between Broadway and 8th Avenue.
Production photo by Carol Rosegg.