This is a guest post by A. Daniel Roth, an educator and journalist living in South Tel Aviv. He was born and raised in Toronto and lived in a commune of the Hashomer Hatzair movement in New York City. Daniel is a member of the All That’s Left collective. You can find more of his writing and photography at allthesedays.org and @adanielroth. 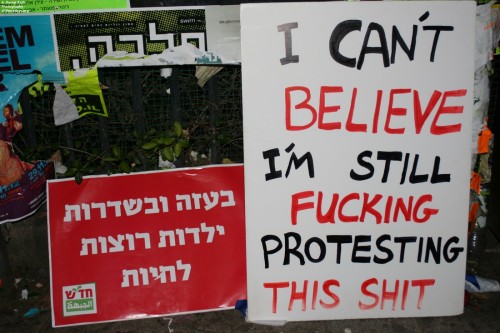 The question was posed: Why is the Israeli left so bored with the peace talks? Why so silent? They are not bored per se with the current round of talks between Israeli and Palestinian negotiators (set to quietly move forward through April 30, 2014). The Israeli left is, however, not paying much attention to these latest encounters between Saeb Erekat and Tzipi Livni.
Actually, I’m not sure if anyone is paying attention here at all. The Israeli government doesn’t seem very interested in moving forward in any way, unless you count rhetorically, and Netanyahu seems more interested in a unilateral one state solution (not the kind where everyone lives happily ever after).
Poll after poll shows that Israelis and Palestinians generally support a two state peace deal based on 1967 borders and so on and so forth. At the same time most people are pessimistic about the chances of such a solution coming to fruition. That’s because the majority of both populations want a peace deal that ensures the ability to live life in peace, build societal institutions that represent national identities and enshrine rights that allow for freedom of movement, freedom of speech and the like.
The idea of ending the occupation and making huge strides forward in ending the overarching conflict between these two peoples shouldn’t be a leftist notion. After all, we’re talking about the simple concept that humans ought to be free. And it’s true; there are two kinds of Israelis that support two states as a solution and only one of them ought to be characterized as left.
There are those that see a demographic threat in their midst: The Arabs will be the majority between the Jordan and the Mediterranean soon so the best idea is to split the area in two and maintain the majority in one part. These “two staters” are not, by any measure outside of Israel, on the left.
Then there are leftists who support two states because they believe that it is the best way to facilitate collective self-determination, harmony and peace and maybe even actual justice.
For both types of two state supporters it is hard to swallow what is actually (probably) being discussed in these talks when you start getting down to the “tachles” details.
For the first kind of supporter, two states are complicated: “Who can go where? How do I get from this town to that town? Where can I pray? Where do we settle the settlers? Where do Palestinians in the diaspora go?” For others, two states are risky: “They’ll kill us! They’ll drown us! They’ll steal our kids! It’ll all fall apart!”
It seems that the majority of people support the idea of two states but aren’t ready to back the reality. Which leaves them with a choice: Vocally back this two state solution; here and now. Or get ready on April 30th (if no deal is signed) to support full citizenship and rights for everyone between the Jordan and the Mediterranean.
For the left, none of the contents of the deals on the table seem very just as far as we can tell. Shouldn’t a state have the right to self defense and to control its own borders? Shouldn’t people have the right to live in the land they are from and have access to places they find to be holy?
The Israel left is silent because it is difficult to conceptualize a reality in which the same leaders that continue settlement expansion and martial law in the West Bank would come to understand the Palestinian and Jewish right to self-determination as equally important. It is hard for most on the left, no matter how many states one is for, to view these talks as anything more than a chance to get “the world” off Israel’s back for a few months while settlements grow.
So what do we do? I believe that there are two state plans that can ensure actual justice, freedom of movement and sovereign space. They all involve open borders, economic cooperation, support and trust. I’m not sure any of the people at the table have that in mind and I am fairly certain that that is the general feeling on the ground on the Israeli left. Still, as I have written previously, we can either organize to push these talks in the direction of true peace and justice or move on to other ideas.
Certainly there aren’t many brave leaders out there ready to take a real leap. So the choice is simple: Get organized, get loud and push on these talks, or remain quiet and agree that two states just aren’t in the cards.
As of August 27, 2013 our silence is winning.

Jewish Americans for Sarah Palin – this is not a joke