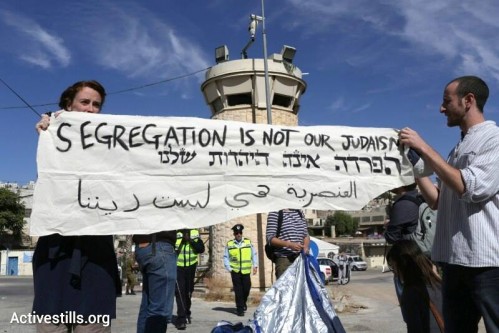 This just in, just in time for this year’s Project Hayei Sarah:

Members of All That’s Left, a collective of activists committed to ending the occupation, marked the eve of ‘Shabbat Chayei Sarah’ by staging a protest against segregation in the city of Hebron. During Shabbat Chayei Sarah, thousands of Jews gather in Hebron to celebrate the reading of the biblical passage in which Abraham purchases the Cave of the Patriarchs, a site located in the center of modern-day Hebron.
The activists intended to erect a tent on the city’s segregated Shuhada Street, adorned with signs reading, “Segregation is not my Judaism,” and to hold an alternative study session examining the Chayei Sarah text. The tent was to resemble Abraham’s Tent, which according to traditional Jewish exegesis was open on all four sides so that any passing stranger would know s/he was welcome.

Police prevented them from erecting the tent and confiscated their signs but allowed them to continue a discussion of the parsha for an hour and a half. The activists were then arrested.  +972 Mag reported that Meretz chairwoman Zehava Gal-On intervened for their release later that night with all charges dropped.
All That’s Left member Talia Krevsky said, “Our signs are a direct response to counter some of the appalling graffiti we have seen in and around Hebron, with images of Jewish stars alongside racist statements such as ‘Death to Arabs.’ That is not our Judaism.”