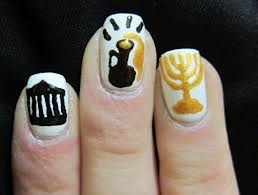 Like the zombie living dead trend,Torah manicures fever just will not die.
Starve the cold, feed the fever, or the reverse. Kill it, already. Why is this still being talked about as though it were an innovative thing? It is NOT.
Look, the idea seems innocuous- in order to make Torah attractive to girls, let’s have a middle school club in which they give themselves manicures with things related to the Torah, parsha scenes, perhaps, and (eventually) discuss them. (How bold, how innovative! came the cry from the innovation alter kockers.)
Guess what Midrash Manicures is not, other than innovative? Innocuous. It trivializes both the girls and the Torah. It doesn’t (as some claim) make Torah more accessible, it makes it “cute” – compared to what “boys do” – which is, study commentaries, and use Torah to make laws and meaning. (When boys do things like get manicures, as they sometimes do for events like Manicure for the Cure, it’s funny, because what girls and women do is seen as trivial and silly. Even though they’re stepping outside of traditional masculinity, they can do it in this instance, as long as they make a joke out of it.)
But, everyone howls, it makes girls more interested in Torah! Well, does it really?
Let’s say it does: So, why aren’t they interested in Torah without it then? What is the structural problems with the way we teach Torah that makes girls think, Nope, not for me? The reason girls maybe don’t love the Torah or whatever is that it’s not cute or cool or sexy for girls to be smart, ESPECIALLY in middle school, when this whole manicure thing is going down. Girls are socialized to not be openly smart or bold or interesting because boys don’t like it. (And boys are the most important thing. Duh.) Instead of openly challenging that-or anything else- Midrash Manicures is buying right into it. It’s not unlike fraternities and sororities who coordinate massive efforts around philanthropy and raise money for kids with cancer-it looks like a great thing to do, so no one questions it, or their failure to work on any level for structural change or systemic roots.
It’s not that, in and of itself, there’s something wrong with getting a manicure. It’s the idea that painting one’s nails with the parshah is an innovative way to teach girls Torah instead of a regressive reinforcement of ideas about gender and both the importance of Torah (it’s so simple you can put it on your nails, if you’re a girl) and how girls can be induced to learn. But in several of the articles lauding this innovation, when the girls were asked about it, their responses were along the lines of: My friends say I’m so lucky because I get to do my nails in school. Clearly the Torah study is sinking in.
Rainbow Tallit Baby has written about this as well, and nailed it (pun intended): “While the manicure program may get more girls in the door than a regular midrash class, offering this program sends the message that torah study is not a serious occupation for women and that torah is not appealing on its own and needs to be sugar-coated (or Ravishing Red coated) to be made palatable to them.”

Get your countercultural clogs on