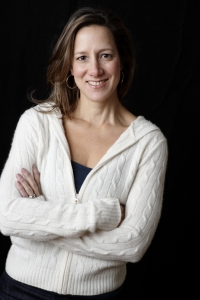 Stars of David: Prominent Jews Talk About Being Jewish

debuted in 2005 and has been a perennial bar mitzvah gift ever since. The book, which features interviews by Abigail Pogrebin with about five dozen celebrities about their Jewish identities, is now an off-Broadway musical. Pogrebin is no stranger to the musical stage; she chronicled her experience as an original cast member of the infamous Stephen Sondheim flop Merrily We Roll Along in her 2011 Kindle Single Showstopper. This morning I chatted with her about the experience of  writing Stars of David, both book and musical, and how her evolving Jewish identity has shaped the project.
In the introduction to the book, she discusses that part of the impetus for the project was that Jewish identity had crept up on her. She was married to a Jewish man, had two children approaching the ages when they might want to know something about what being Jewish meant, and she realized that she didn’t have an answer to that question. “I wasn’t necessarily honest with myself about why I started the book in the sense that I didn’t know how at sea I was, in terms of my own Jewish identity, when I approached famous people,” Pogrebin said. “I think sometimes stories are generated by some subconscious impulse to understand something for yourself. And I don’t want to over-analyze my motivations in starting the book, but I would say that having these frank conversations with some of our highest achievers made me look much more candidly at myself, and I realized I hadn’t answered a lot of the questions I was asking, personally.”

I noted that as she embarks on the stage version, she’s in a very different place Jewishly, involved with her synagogue and a number of other Jewish pursuits. Was that the book’s doing? “I thought I was going to need to be more Jewishly literate than it turned out I needed to be for these conversations – it’s not that these people aren’t smart, most just were not necessarily steeped in text and ritual,” she said. “I didn’t want to be caught in our ignorance in these interviews, so I started to study Torah at the same time I was doing these interviews, and I haven’t stopped. That was 12 years ago. That was because of the book, and once you have a taste of it, you want the whole meal. You want the meal, you want the diet. It’s become part of my life – it’s not to say I’m davening every morning, but certainly my level of engagement is significantly changed. ”
While resisting being “all Oprah about it,” Pogrebin enthusiastically described the way this intellectual exploration of Judaism gave way to a spiritual exploration. “I think as anyone who has discovered the magic of reading Torah with friends and a guide – and a guide matters, I couldn’t do it by myself – there is a kind of magic in it. Something happens in the room and in yourself, it does change the way you approach your decisions, approaches, parenting, relationships.” This change was solidified by Pogrebin finding a spiritual home at New York’s Central Synagogue, where she eventually became bat mitzvah at age 40, a decision she says, “really did come out of the book, in a roundabout way. You can’t say you set out to interview celebrities and you end up on the bimah, but that’s what happened to me.”
Reading the book from my vantage point as a Jewish professional and erstwhile Jewish educator, I couldn’t help but notice that many of the celebrities spoke of strong Jewish identities with weak-to-nonexistent Jewish activity in their lives. I wasn’t the first to raise this point with Pogrebin. “When I traveled talking about the book to JCCs, Fed, and synagogues, a number of people really enjoyed the book and were really disappointed by the level of Judaism in these Jews, or in the lack of observance, honestly. I don’t think they expected them to be Orthodox, but they wanted them to be going to shul or making their children have strong identification, and that wasn’t always the case, and in fact with the majority that wasn’t. I had someone at an Orthodox synagogue raise their hand and say ‘I loved the book, but I don’t think the title was accurate.’ That’s a debate we could have for days: are these Jews not Jewish enough?” I laughed and likened my experience reading the book to the refrain of “Celebrities: they’re just like us!” heard more and more since social media has given us a window into more celebrities’ lives. 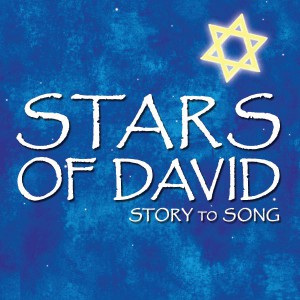 But does it sing? The idea for creating a musical version of the book came from Pogrebin’s old friend and recent collaborator, producer Aaron Harnick (coincidentally, the nephew of Fiddler on the Roof lyricist Sheldon Harnick.) “We began to discuss it and explore it together, and what I did see in his proposal was that these interviews had drama in their candor,” said Pogrebin. “If not drama, they had complexity and moments of emotion and humor and regret and connection, disconnection. Things that are elements you want in a song because a song is a story, and these are stories.”
Harnick hooked Pogrebin up with Tom Kitt, the Tony- and Pulitzer Prize-winning composer of Next to Normal (which had not yet hit Broadway at that point), and in working together, it was Tom who suggested pairing different songwriters with different interviews to highlight the multivocality of the piece. Producer Daryl Roth and director Gordon Greenberg came on early in the process, aiding their ability to reach a wide range of songwriters. Some songwriters were approached with specific chapters of the book in mind; others read and chose for themselves. Because the book was written in 2005, there were a few new pieces created just for the show: Bravo’s Andy Cohen, cabaret singer Michael Feinstein (who co-wrote his own autobiographical song), and Gwyneth Paltrow. The Paltrow piece is unique in that it was written by Paltrow’s longtime friend Jill Kargman, who based it on a lifetime of interactions rather than one specific interview.
The show played Philadelphia last year, in a production that didn’t quite gel. “At first we wanted there to be a fictionalized story-line that connected the songs, and it ended up fighting the songs, being too discordant,” explained Pogrebin. For the New York production, the story has been jettisoned. “The songs are documentary, based on true interviews, and the story was invented and loosely based on me but not me because my life is not interesting or funny enough, so it just didn’t jibe. So now it is basically a song cycle, and the connectors are quotes from the book read by the actors.”
So, why do we want to see 80 minutes of singing and dancing Jews? “I know [Jewish] audiences see themselves in so many of [the celebrities portrayed],” said Pogrebin. “We read ourselves into text, and we read ourselves into stories of the people who feel like they’re part of us. For better or for worse, Jews feel like we ‘own’ Jewish celebrities — they represent us on some level. So I do hope that Jewish groups, Jewish families come and see us.”
Of course, she hastens to add that the show is not only for Jews. “But I do think it’s an entertaining show, 80 minutes in and out, and you can have a nice dinner afterwards.”
Stars of David, a concert presentation celebrating the identity of some of the most well-known Jewish personalities, plays a limited engagement from November 13 – December 15 at the DR2 Threatre (103 East 15th Street, at Union Square). Tickets are $75 and can be purchased online at www.telecharge.com or by calling 212-239-6200, or in-person at the DR2 Theatre box office (103 East 15th Street, Union Square).  For more information, please visit www.StarsOfDavidSongs.com.

Throwback Thursday: Kung Fu Jew on "Why I Post the Worst of Israeli News"