Nearly all of the issues I raised in my 2011 post, “The Price of Jew$chool,” which lamented the state of Jewish Day School tuition and the weaknesses of its alternatives in formal Jewish education, unfortunately remain quite relevant today.  Then again, statements such as the 25-year-old Greek Chief-Rabbi elect‘s recent reflection that the internet was his Jewish education, stand as sobering reminders that beyond the U.S. and Israel, Jewish education, even in its most modest forms, is a scare resource.  According the 2013 Pew Report Forum findings on Jewish life in America, 23% of Jews report having attended Jewish Day School or yeshiva in their youth, and nearly 60% have attended some other form of (non-Day School) formal Jewish education. What does the future hold? How can we respond to this continuing crisis?

The Price of Jew$school
Before you panic, rest assured: we’re not about to start charging you when you read more than 20 posts per month.  No, we’re talking about the ever-skyrocketing expense of sending children to Jewish day school in the U.S.
With $7,000 you might be able to fly back and forth to Israel six times, but for the same price you could stay put in Overland Park KS and learn at the Hyman Brand Hebrew Academy for one year.  One thousand dollars more will buy you—show them what they’ve won—one year of 1-8th grade education at the Cincinnati Hebrew Day School. If you want to send your child to the Solomon Schechter of Atlanta, be prepared to shell out upwards of $17,000 per year starting with first grade.  $26,650 might be a fine price for a Toyota RAV4 Sport, but did you know that for the same price, you can ‘kaneh likha rav’—or maybe even four—and enroll for one year of high school at the Jack M. Barrack Hebrew Academy in Bryn Mawr, PA? $29, 955 would be a steal for a small, foreclosed apartment in a depressed real estate market, but it could also buy you one year’s education at Milken community high school in LA.  These numbers don’t even include the usual “give and get” $1,000+ minimums typically imposed upon day school families on a yearly basis.

Some day schools—such as the Ramaz School of NY and the Ida Crown Jewish Academy in Chicago, IL— do not openly disclose their tuition fees, and perhaps for good reason. Unless you are Ivanka Trump, who wouldn’t want to faint upon seeing these staggering numbers?  Especially given today’s economy, how can anyone but the super-rich possibly afford to shell out $20,000 dollars annually to send a child (or, more likely, multiple children) to Jewish day school…for 15 years?
As a day school alum (16 years, but who’s counting) whose entire college tuition (yes, all four years combined, at a private institution which furnished me with an excellent post-secondary education) still cost less than one year of Jewish high school, the irony of this situation is not lost on me.
Haters in the Cheder
The Jewish Day School tuition crisis has only worsened over the course of the last decade, as aptly demonstrated by the Yeshiva Tuition Talk blog. Check out this meticulously well-researched case study on the surging tuition fees of two orthodox yeshivot in the U.S.

A recent Huffington post article, also lamenting the current tuition crisis among orthodox Jewish day school, concurs: there is no end in sight.  One emerging ‘alternative’ mentioned in the article is the new wave of Hebrew Charter schools opening across the U.S. Hebrew language charter schools, such as the recently-opened Hebrew Language Academy Charter school in Brooklyn, Hatikvah Charter school in NJ, the Shalom Academy also in NJ, slated to open in fall of 2011, and the Ben Gamla Charter school in Hollywood, FL, which offer one possible compromise, by offering Hebrew language instruction without the formal religious studies curriculum which serves as the backbone of traditional day school education….all for free.  But some, such as Yossi Prager, North American director of the Avi Chai Foundation and board member of Bergen County Jewish Day School, argue that the new Hebrew language charter schools phenomenon poses a serious threat to Jewish day schools, by whisking away students who would otherwise attend the day schools (and bring the steep but much-needed tuition with them).   Others, especially in the orthodox community, argue that such charter schools, without the ritual, theological, and life cycle components which are the hallmarks of Jewish day school education, will not properly educate and socialise Jewish students seeking a “Jewish” education.  Furthermore, as public schools, these schools are technically open to any student, regardless of ethnic and/or religious background; many of these schools accept students via a lottery system. 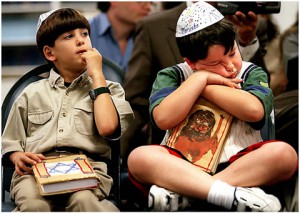 On the opposite end of the spectrum are those who are concerned that these new charter schools exploit U.S. charter school system and use tax dollars to fund what really ought to be a private religious education.  For example, in the case of the Florida Hebrew language charter school, which is headed by an orthodox rabbi and occasionally used religiously-oriented content in teaching Hebrew, there was concern early on as to whether this school—ostensibly a public school—abided by the division between church and state.
For others, the solution is internal to the day school, whether through financial aid or scholarship. But as Kim Hirsch points out, such arrangements may help families in the lowest income brackets, while leaving the ‘middle tier,’ which would not qualify such financial assistance, in a precarious position. While these families can technically afford the tuition, day school education will necessarily sap away money that would be otherwise set aside for paying off mortgages, for college tuition, for medical expenses and for other unexpected emergencies.
Especially among ‘middle tier’ Orthodox families who refuse to send their children to American public school, such extremes as moving to Israel has become a trend—for the express purpose of sending their children to affordable Jewish day school. Despite the formidable overall cost of living in Israel, moving to Israel and/or commuting back and forth from Israel to a job in the U.S. ironically proves to more ‘fiscally practical’ than continuing to live in the U.S., when the cost of a Jewish education is figured into the equation.
But the Jewish day school situation in the U.S. might change. The coming years could witness a transformation of religious private school education in the U.S. Just a week ago, in Arizona Christian School Tuition Organization v. Winn, the Supreme Court ruled 5-4 (with a conservative majority) in favour of a “school choice” program in Arizona, which grants people $500 tax credit for donations to private religious schools. Here again, the net effect is public funding of religious schools—and even more  than in the aforementioned case of the charter schools. While one possible upshot of this ruling could be more donations to Jewish day school, the violation of the separation between church and state  significantly outweighs any possible gain, especially in our current moment of burgeoning right wing extremism in the U.S. In her first dissent, Justice Kagan proffers the deeply unsettling hypothetical (but compelling) example of government-subsidised crucifixes, explaining that the difference between tax credit and government stipends is negligible.
Jewish Day School: Live it, Love it, Make it a Lifestyle Choice
We have yet to deal with the actual purpose and goals of day school.  Despite the adverse reaction that the exorbitant costs of day school education may deservedly elicit from a sober-minded, fiscally responsible adult, there is a reason—if not several reasons—people have been forking over the Benjamins for day school education in the U.S. since the 1960s.   Parents choose to send their offspring to  Jewish day school in the hope that their children will thus be situated in an educational setting that  is committed to their absorbing a critical mass of Jewish knowledge, and to planting these children in a Jewish environment—a Jewish culture—at a critical age and, ideally, exposing them to the joy of a vibrant Jewish community. Whether all Jewish day schools deliver on this end is an entirely other issue, but this is certainly the objective.
Only in full-immersion situations, where a child’s social reality and daily schedule is saturated by Jewishness—such as is very much the case in Jewish day school—can a child begin to understand what an active Jewish life may entail. This is certainly not to say that a public school student cannot lead an authentically ‘active’ Jewish life; rather, it is simply to acknowledge that such an arrangement poses additional obstacles, as acti 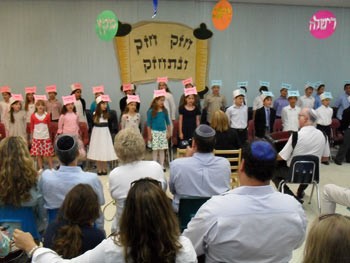 ve expressions of Judaism are, by necessity,  relegated to extracurricular status. For adults active in congregational/communal life, the challenge is less acute, but for children, whose friendships and identity formation are so intimately wrapped up in their school experience,  environment is key in identity formation.  Sunday schools or other forms of supplemental religious education has proven to itself to be largely ineffective,  as pointed out in Mindy Schiller’s excellent article, “What’s Wrong with Hebrew School?,” which appeared in the World Jewish Digest in October 2007. The article describes denominational attempts to correct its past failures on the level of curriculum, but the challenge of engaging youths in this particular form remains daunting, to say the least.
There are other productive outlets for children’s’ Jewish identity expression, such as Jewish youth groups and summer camps. As sociologist Steven M. Cohen’s recent study on the long-term impact of Jewish overnight camp demonstrates, attendance at these camps improves the likelihood of later Jewish involvement in nearly all facets of possible commitment. But even a hopeful reading of these numbers still leaves something to be desired in terms of overall impact and projected commitment to Jewish identity, knowledge, and involvement.

How can we make away with this people?…Go about and observe their schools and academies. So long as the clear voices of children ring forth from them, you will not be able to touch a hair of their head. For thus have the Jews been promised by the father of their people, ‘The voice is the voice of Jacob, but the hands are the hands of Esau.’ While the voice of Jacob resounds in the schools and academies, the hands of Esau have no power over him. (Genesis Rabbah 65:20)

In short, the ‘product,’ to put this in the crassest marketing terms, which Jewish Day School is ‘selling’ is equal parts medium and message.  This is what I mean when I speak of ‘full immersion’ models: Jewish day school at its best 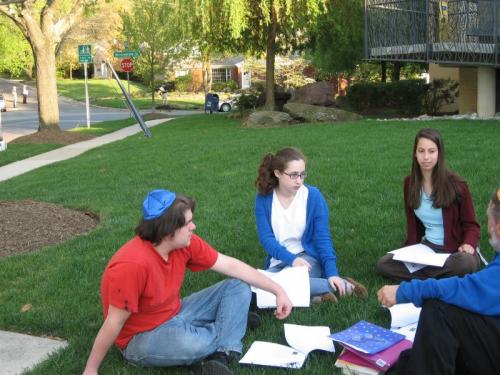 should represent the complete synthesis between Jewish ethics/philosophy and action. While the Orthodox in the North America remain something of a ‘captive audience’ for day school by virtue of their lifestyle and values and their fear of the deleterious “outside” influence of secular culture, at this time of economic crisis, the looming and fatefully critical question for many of us remains:  how can Jewish day school be pitched to non-orthodox families? How might we create a revolution in Jewish education that could parallel the independent minyan phenomenon by finding ways to break from the model of institutional Judaism, or at least to supplement it with vibrant, less expensive, engaging alternatives that will speak to the social reality of today’s Jewish youth and keep them involved and excited about their active involvement. Whatever this vision may entail, empowerment seems to be the operative word.  This challenge is clearly one of extreme existential significance to the liberal Jewish community as we look to the future.

A Klee for Filling