Much of this is taken from an email to a good friend. 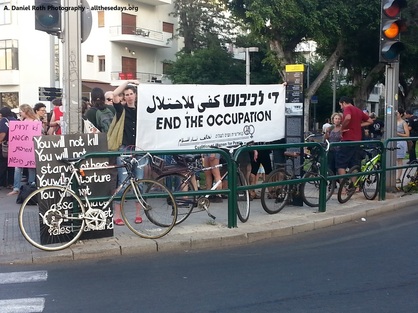 I am glad that you got this conversation started. I need to be thinking this way about making a positive impact on the world as humans and as Jews. I have been working hard lately, getting the next round of “Achvat Amim” participants ready, and covering the situation from the border areas with Gaza, Ashkelon, and Tel Aviv. I’m sorry it took me this long to write back. I’ve been learning an enormous amount about me and about the media. Writing and sitting in the studio gives you a chance to go through an analytical process, not a complete one – TV may not be built for thorough analysis at all – but something. Being in the field involves a lot more communication about what you see around you, what others say around you, and how it feels. It’s a strange and interesting world. The other day, I was walking to work and cool breeze, unusual for July, was blowing in from the West. It reminded me that I needed to write you back and it reminded me of all the pain and progress over where you are and the overbearing feeling of chaos over here.
You wrote about Mississippiand the 50th anniversary events for Freedom Summer. I’ve been thinking a lot about North America and about the Civil Rights movement; how far everything has come and much needs to be done. Last month I thought a lot about Andrew Goodman. I grew up hearing stories of the 3 Civil Rights heroes, murdered because they stood for equality in a time and a place where that was dangerous. My mom used to tell us about him and I would listen, impressed and hoping to do something important for the world as well. I grew up with the book, “We Are Not Afraid” sitting on the shelf in our house, clear and present all the time. Here, in Israel, anti-war protests have been met with fascist street gangs, ready to attack. It sounds like an embellishment, but it’s not. That spirit, the mood here, as the death toll mounts is sickening and it is also why I moved here. The fear of being publicly calling for equality, of being what Israelis call a “Leftist”, is why I think it is important for me to be here right now; to help push forward, away from racist nationalism. I have witnessed racism on the bus and on the street and at cafes and at work and as people ran for cover from rockets.
When I chant peace and justice slogans at demonstrations with hundreds and sometimes thousands of others and others call for my death and the deaths of all Arabs and Leftists I get the feeling that many of those calling for blood have been smothered in hate by fear and they are looking for violence to as if it will grant them a moment of respite from the feeling of helplessness. They see Palestinians as less than human and Leftists as traitors in their midst, and I truly don’t understand what drives that. These days in this climate kids are the targets, and racism seeps out from behind closed doors. The fear I feel for those I know on the front lines always leads me to oppose war, so I have trouble understanding the call for more war as somehow supportive of those fighting. The tension has gone international. We are now bearing witness to what seems to me, from here in Tel Aviv, like a global wave of protests, digital arguments, and racist violence. People I know that never talk about politics or conflict are ending friendships; people have had to put up disclaimers on their facebook walls letting the world know that calls for genocide are not okay. I recently caught the tale end of a propaganda ad put out by the IDF and I literally felt sick.
Palestinians living under occupation in the West Bank and East Jerusalemare, as I write this, taking to the streets. It seems something is different. And as destruction mounts in Gazaand sirens ring out here, I repeat: In the “only democracy (is that even still true?)” in the Middle East people are getting beat up in the streets. I thought about what I wrote the last time violence escalated, to a lesser extent, like this. It’s all still true. After a failed round of peace talks, teenagers being murdered in terrible, cold blood, and hate-filled sentiment in the streets all of is still true.


But this time is different. I can feel it in my bones. It’s not just the involuntary panic of hearing a car accelerate and thinking it is a red alert siren. It is more. It feel like a wave and no one controls a wave. Not Netanyahu, not Obama, not Abbas, Not Meshaal. Instead of cultivating a bit of foresight among the so-called “leaders”, we are witnessing a massive failure of moral courage or strategic action. And again, no one can control a wave. That can be good or that can be really, really bad.  No one really knows where this is all leading. This isn’t the most violent it’s ever been, but what we are witnessing – what we are a part of – is new.

This piece was originally published in two parts on allthesedays.org. The first part is here, and the second part is here.
A. Daniel Roth is an educator and journalist living in South Tel Aviv. You can find more of his writing and photography at allthesedays.org and follow him on twitter @adanielroth

Just call me a snowball in hell…