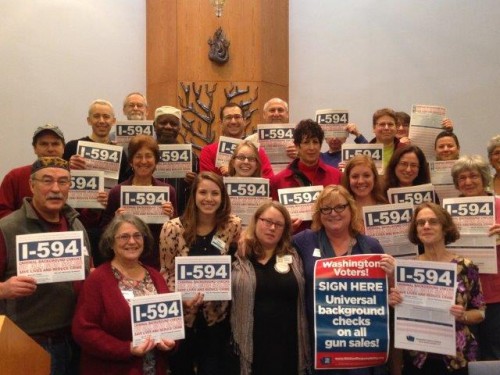 Thsi is a guest post by Zach Carstensen, the Government Relations and Public Affairs Director for the Jewish Federation of Greater Seattle. For the last nine years Zach has led the Jewish community’s work in issues ranging from the freedom to marry to gun responsibility. (Above: Congregation Beth Shalom of Seattle members gather around Cheryl Stumbo, center right, a survivor of a 2006 shooting at the offices of the Seattle federation, in support of Washington state gun control Initiative 594.)
Pundits are debating the winners and losers of the 2014 election. Some point to Republican gains in Congress as a sign of conservative ascendancy. Others cite successful ballot measures to raise the minimum wage as a sign of increasing economic populism. More than a few mined voter data, proclaiming the death of the once-effective coalition of young voters, people of color, and women.
What these pundits miss are the lessons for the Jewish community from the success of Washington state’s Initiative 594, which closes a loophole in state law by requiring a background check for all gun sales.
The central lesson from I-594 is that, in the 21st century, there is still need for Federations and Jewish Community Relations Councils (JCRC) to lead the Jewish community in action-oriented social change. It wasn’t that long ago that the Jewish community was the leader of social change among labor, LGBT, civil rights, and other social justice movements of the 20th Century. The Jewish contributions to these social movements were legion. Back then, our communal institutions were not mature, but they were daring. They took risks. Today, Federations and JCRCs might be the only institutions who can lead the entire Jewish community. Federations and JCRCs are the only institutions that can transcend the differences within the Jewish world, manage the competing interests that exist within our own communities, and can harness robust political experience to enact the progressive policies needed in this new century.
Two events catalyzed the Jewish Federation of Greater Seattle’s commitment to reducing gun violence. The Jewish Federation and the broader Jewish community were victims of gun violence in 2006 when a man broke into Federation offices and shot six people, killing one woman and seriously injuring five others. Cheryl Stumbo, one of the victims, later became the primary spokesperson and citizen sponsor for I-594.
Not long after this tragedy, the Jewish Federation adopted a broad policy to support stronger gun laws, an improved mental health system, and better security non-profit and faith institutions. This policy has influenced our legislative priorities.
In 2012, the Jewish Federation was pushed to even more urgent action in the grim wake of the Sandy Hook massacre. The Federation, along with other Jewish organizations, sought to change the gun responsibility narrative. At the same time, civic leaders in Seattle were looking for a similar opportunity and building what would become the Yes on I-594 campaign and the Washington State Alliance for Gun Responsibility.
Almost immediately, Seattle’s leading rabbis began to construct a comprehensive Jewish argument for stronger gun laws. Behind the scenes, the Jewish Federation was mapping a strategy to build and engage a large, coordinated Jewish coalition, to influence the policy debate surrounding background check laws in Olympia, WA.
Beginning in 2012, the Jewish Federation built the type of Jewish coalition and generated the type of activism that used to be the norm for our community. Our coalition maximized the Jewish community’s strengths and was well integrated with the larger interfaith presence in the Yes On I-594 campaign.
Twenty-three Jewish organizations joined the effort. They ranged from Jewish Family Service to the Kavana Cooperative. The rabbinate supporting I-594 ranged from Rabbi Moshe Kletenik, one of the Pacific Northwest’s most influential Orthodox rabbis, to Rabbi Daniel Weiner, senior rabbi at the region’s largest Reform synagogue, Temple De Hirsch Sinai.
(Below: Washington Coalition of Rabbis members meet state legislators in Olympia to lobby for I-594.) 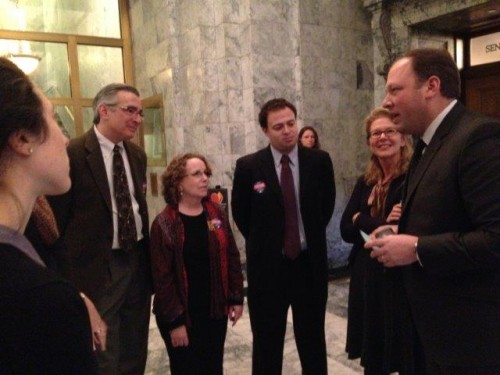 The Federation’s actions defined the issue for Seattle’s Jews. When a National Rifle Association representative misappropriated the history of the Holocaust, the Federation publicly and effectively denounced the NRA’s misleading assertions and reinforced the need for strengthening the law on background checks.
Through its network of supporters, the Jewish Federation built a cadre of more than 1,000 gun responsibility activists. These individuals were encouraged to participate in get-out-the-vote efforts, phone banking, and other campaign activities. During Sukkot, the Jewish Federation and Jewish Family Service coordinated the largest education effort on gun responsibility and I-594 in the Jewish community. They prepared and distributed 4,000 kits to help families talk about gun violence, domestic violence, and the need for stronger gun laws.
I-594 did not pass solely due to the Jewish community or the Jewish Federation’s efforts. Nevertheless, we offered staff, fundraising, communications, and other forms of support, giving the Yes on I-594 campaign a reliable, effective, and impactful coalition partner.
Even as we celebrate the passage of I-594, I am also celebrating the resurgence of the Jewish community – and Seattle’s Federation — as a force for influencing the debates of our time. There are few issues the Jewish community can drive on its own, but well-coordinated Jewish participation in broader coalitions can have a positive impact on the issue in question and on the strength of the Jewish community overall.
The campaign to pass I-594 set a pattern for future successes in Washington state and in other communities, bringing Jewish values and Jewish community action to the forefront of our public policy debates and campaigns.
(Below: Seattle Mayor Ed Murray speaks at Temple De Hirsch Sinai during the Faith Action Network march in support of I-594.) 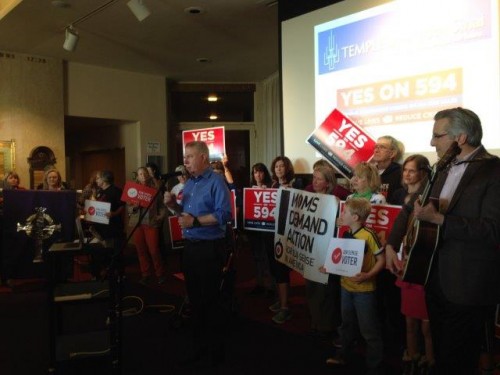