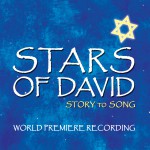 On the surface, Stars of David sounds like a cynical cash-grab show: a small-cast revue based on journalist Abigail Pogrebin’s 2005 collection of interviews with prominent Jewish Americans sounds like it was designed to tour the Jewish Community Centers of this country ad infinitum. Whether it was any good or not would have almost no bearing on whether Jewish grandparents would buy tickets by the bushel. So, I was surprised and delighted when I saw the show in its off-Broadway incarnation last year to discover that the show was also entertaining and at times moving. Now, a year later, Yellow Sound Label has released a “World Premiere Recording” featuring the off-Broadway cast (Janet Metz, Alan Schmuckler, Aaron Serotsky, and Donna Vivino) plus three performers from the world-premiere production at the Philadelphia Theater Company, Alex Brightman, Joanna Glushak, and Brad Oscar.
If you saw the Philadelphia Theater Company production and are perplexed by my description of the show as a revue, there’s a reason. While that production has a book by Charles Busch, the book was later discarded in favor of the revue format. The opening number (by Gaby Alter, who shares lyric credits on this song with Pogrebin and director Gordon Greenberg) retains a hint of the story that once was, in which Pogrebin sets out to interview prominent Jews attempting to gain some insight into her own Jewish identity, but once that’s out of the way, the rest of the album offers a collection of sung monologues in the voices of each of these celebrities, with an equally impressive array of songwriters taking turns in musicalizing Pogrebin’s interviews. (Only one song, “Who Knew Jew,” about Gwynneth Paltrow, is not based directly on an interview from the book. For this one, Gaby Alter teamed with lyricist Jill Kargman, a friend of Paltrow’s who wrote the song based on her firsthand knowledge of the subject.)
The variety of songwriters offers a pleasing variety of song styles, and while some songs shine brighter than others, there isn’t a clunker in the bunch. Highlights include Maltby & Shire’s take on Aaron Sorkin (“Smart People”), Sheldon Harnick’s Norman Lear song “The Book of Norman,” Amanda Green’s “Just Be Who You Are” about Fran Drescher, and Michael Friedman’s “Horrible Seders,” about Tony Kushner. You’ll also find contributions from Duncan Sheik and Steven Sater, Tom Kitt, Miller & Tysen, Michael Feinstein, Marvin Hamlisch, Alan & Marilyn Bergman, Jeanine Tesori, and others.
The cast is uniformly excellent, conjuring these familiar characters without ever really impersonating them. So while Janet Metz’s version of Joan Rivers won’t immediately bring the late comedienne’s voice to mind, it absolutely evokes her spirit. Donna Vivino suggests of Fran Drescher’s trademark husky-nasal Queens accent, but she employs a (thankfully) more musical take on Drescher’s sound than a recreation of it. Alex Brightman brings a youthfulness to characters from Leonard Nimoy to Tony Kushner that helps us hear these men’s words divorced from the outsized public personas these men have in the real world. Aaron Serotsky’s romantic tenor lends a nostalgic sheen to his numbers, while Alan Schmuckler’s way with patter helps land the comedy of his numbers.
The five-piece band, led by Sinai Tabak, does its best at making the klezmer-influenced charts by Sam Davis and Neil Douglas Reilly sound fuller than they are, but at times one wishes the album featured a larger ensemble. The album packaging is bare-bones, with a few photos from the New York production and a song list indicating for each song which character is represented, who’s singing, and who wrote it, but there is no essay to provide background or context for the show. (If you’d like to know more, might I recommend this interview with Abigail Pogrebin I wrote during the show’s run?)
While the material may lack some of the universal appeal of other Jewish-themed shows like Fiddler on the Roof or even Hello Muddah, Hello Faddah, the songs are good enough than theater fans (and in particular, fans of these performers and writers) should want this in their collections. And if you’re still looking for that last-minute Hanukkah gift for bubbe and zaydie, you could certainly do no wrong with a gift of this album.

This kid is freaking brilliant