Skip to content
“Please do not mistake courtesy for consensus or applause for endorsement of all the policies you pursue,” states an open letter to the Israeli Prime Minister (PM). Was it Netanyahu, per chance? Actually, these words were addressed to PM Yitzhak Shamir in a 1989 open letter signed by 41 prominent mainstream Jewish leaders in response to his assertion that the standing ovation he received after giving a speech was indicative of American Jewish support for his aggressive settlement policy.
Tom Smerling of Project Nishma (Let Us Listen), conceived of the letter as a strategic move to promote the involvement of mainstream Jewish leaders in the Middle East peace movement. This behind-the-scenes strategic leadership was Smerling’s trademark.
In the late 70s, Smerling “discovered” the Israeli peace movement reconciling his personal values with “my loyalty to my tribe.” That led him to organize Et Shalom – Time for Peace (Minneapolis in 1979), become the Midwest Coordinator for The Shalom Network (1980-81), found Project Nishma – We Will Listen – (Washington, DC from 1989-1997), and direct the Washington office of the Israel Policy Forum, (Washington, DC from 1997-2001).
Following is the first of a two-part post describing his work. It begins with snippets from our conversation on October 1, 2013.
Forming Et Shalom and Joining the Shalom Network
[pullquote align=right] Many prominent Jewish leaders were deeply troubled by Israel’s response to the First Intifada.
[/pullquote]”In 1979, in response to a talk by MK Meir Pa’il at my family’s synagogue, Temple Israel in Minneapolis, a group of us formed Et Shalom to promote Israeli-Palestinian peace locally, like others that had sprung up organically around the country at this time. Somehow we found The Shalom Network, and I became the Midwest Organizer facilitating communication among these groups through a newsletter, training, and tours. After New Jewish Agenda started, we became their Middle East Task Force.”
Organizing Mainstream Jewish Leaders through Project Nishma

“Many prominent Jewish leaders were deeply troubled by Israel’s response to the First Intifada. But the prevailing view of the mainstream community was that the U.S. should leave hands off. We wanted to encourage those who were privately sympathetic to a two-state solution to publicly endorse it. We decided to test the waters by bringing over pro-peace Israeli generals in order to broaden the movement. That experiment in 1989 became Project Nishma.
Our organizing principal was simply agreeing to listen to Israeli military and political figures with alternate views. We intentionally chose this low bar instead of purist principles that would only be endorsed by people with little political clout. Still, simply bringing over generals who differed with the Begin and Shamir governments was controversial.
The strategy worked well, because many Jewish leaders would never have joined any group with the word “peace” in its name. We ended up with over a hundred prominent leaders as endorsers. Later, board members wanted to act, rather than just listen. At that point we advanced the view that a significant segment of American Jewish leadership that supported the principle of land for peace with security.”
Project Nishma Takes on then Israeli Prime Minister Shamir
[pullquote align=left] Simply bringing over generals who differed with the Begin and Shamir governments was controversial.
[/pullquote]”The Israeli prime minister came annually to the U.S. to speak at the General Assembly (GA) of the Conference of Jewish Federations and then meet with the U.S. president. The standing ovation he always received allowed him to say to the president, ‘All American Jews are behind me.’
In 1988, Shamir used this tactic, claiming support of his positions from American Jewry as a whole. The following year, we countered this tactic with what became known as the Letter of 41. The sentence that most reverberated was, ‘Please don’t mistake our applause for agreement and politeness for political backing for all your positions.’ 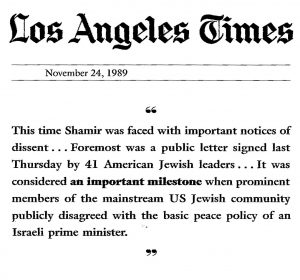 Many of the signers were on the dais at the GA, sitting behind PM Shamir as he spoke. The fact that prominent Jewish leaders dared to differ with him was an affront to Shamir, and a major story in a hundred newspapers. The Jerusalem Post wrote: ‘U.S. community leaders now ready to oppose Israeli policies openly.’
Shamir’s response was: “Leaders, but who are these leaders?” So, the next year we hired, a prominent sociologist to poll every board member of the Council of Jewish Federations, and every local Jewish Federation president. We found widespread agreement with our positions, and released the poll the day before Shamir’s speech in order to make headlines the day he spoke.
It worked. Everywhere Shamir went, he was confronted with the poll. We broke the myth of Jewish unanimity. It shows that, in fact, American Jews and American Jewish leaders were more dovish than the organizations that were purporting to speak for them.”
Backing PM Yitzhak Rabin 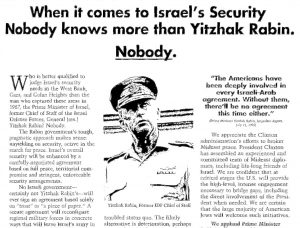 “When Yitzhak Rabin was elected, we realized we could help the Labor government by promoting the peace process. AIPAC initially dragged its feet in supporting Rabin’s peace policies, and Jewish organizations further to the right vocally opposed the Prime Minister’s stance, so we put out an ad: ‘Nobody knows more about security than Rabin.;
We also saw that American Jews could play a role in thawing relations with by opening up a dialogue with Arabs who were not ready to talk to Israelis. Our Syrian-American Jewish dialogue preceded a Syrian-Israel meeting that came very close to a deal on the Golan Heights.
In 1997 we merged with Israel Policy Forum (IPF) in order to form a combined group with legitimacy both in the Washington political arena as well as within the Jewish community and its leadership. Project Nishma became the Washington office of IPF.”
Organizing to Celebrate the Oslo Agreement
“My wife Reena Bernards and I realized the night the Oslo Accord was signed that both Arafat and Rabin were in Washington, DC and nothing was happening at night except receptions at the embassies. The news broke on Thursday that the signing would happen Monday. We spent those four days organizing what became an event celebrating the Oslo Agreement for seven hundred Jews and Arabs. We organized mainstream Jewish and Arab organizations to host it and kept ourselves in the background.”
Other posts from the American Jewish Peace Archive:
Tom Smerling, Israeli-Palestine Peace Pioneer, Part 2
Jerome M Segal, Israel-Palestine Peace Pioneer
Rosalie Riechmen Pressman, Israel-Palestine Peace Pioneer
American Jewish Peace Activists Tell Their Stories

Columbia Profs to Apologize to Ahmadinejad