1,000 people, mostly American Jews, headed to the Roosevelt Hotel this past Sunday for HaaretzQ, an intensive one-day event devoted to conversation about Israel-Palestine. Convened by Haaretz and New Israel Fund, the event attracted an impressive line-up of prominent speakers. Some of those giving keynote addresses included Israeli President Reuven Rivlin, Joint List head Ayman Odeh, UN Ambassador Samantha Power, and writers Peter Beinart and Ari Shavit. Even in break-out sessions, the conference’s panelists were a who’s who of Israeli, Palestinian, and American liberal Zionists. Even President Barack Obama, while not present in-person, gave an address via video at the conference’s kick-off session.The attendees came from all around the country, though most seemed to live in the Northeast.
The event was a bit of a blur, consisting of nine-hours of almost non-stop discussion. But for those looking for a quick summary, here are five key take-aways, gleaned both from what speakers had to say and conference attendees’ reactions:
1. There is no Zionist consensus among conference attendees
This conference was convened by two organizations that expressly support a two-state solution. But among conference attendees, there was a wide diversity of opinion regarding what a just solution looks like for Israel and Palestine. This is not to say there were no traditional two-staters present (there were many — probably a plurality), but there were a surprising number of people supportive of a binational state in attendance as well. Perhaps most striking, a number of attendees (often younger attendees) expressed some level of ambivalence about the question. The question they are asking on the most basic level is not “how do we achieve a two-state solution” but “how do we end the occupation?”
To some, those two questions might feel similar, but for staunch supporters of two-states the difference has major ramifications. Younger activists seem to perceive allies as those who, like them, oppose the Occupation of the West Bank (and, arguably, Gaza). In other words, they aren’t so concerned about whether an individual or an organization is “pro-Israel.” Ending the Occupation, in their eyes, is not a means towards achieving the two-state solution. The end to the Occupation is actually their most basic goal, and many would be happy to achieve it through whatever solution proves most efficient. 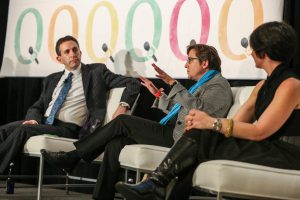 2.   The word of the day was “intersectionality”
Intersectionality is the idea that the struggles of all marginalized peoples are connected (they “intersect”). The organizers of this conference made it clear that they take intersectionality seriously. As one example, there was an entire session entitled “Whose Live Matter,” focused not only on Israel-Palestine, but also on the Black Lives Matter movement here in the United States, implying that the conference supports BLM’s efforts to achieve racial justice. Furthermore, in a subtle gesture supporting movements against sexism (especially those focusing on conferences specifically), all of the panelists in that session were women (and all sessions in the entire conference included at least one female presenter).
3.   Some vast differences among self-described liberal Zionists were apparent
When discussing the various ways that individuals conceptualize their beliefs about Israel and Palestine, we often tend towards the broad characterization of “liberal Zionist” for those who oppose the occupation, but support the existence of a sovereign Jewish state of Israel. One keynote conversation, between writers Ari Shavit and Peter Beinart, demonstrated some of the basic distinctions that can and do exist among those who fall loosely under that umbrella term. Beinart focused on critiquing more moderate figures on the left in Israel, stating that he “does not see Isaac Herzog as a legitimate representative of the values of the left in Israel.” But Shavit continually asked those in attendance to try and empathize with Israel’s security concerns. For those who seek to group the ideology of all Liberal Zionists together, this conversation is a strong argument that they should reconsider.
4.   Breaking the Silence took center-stage
Breaking the Silence has been hugely controversial in Israel for many years, but things seem to have heated up in the past few weeks. It appears that when the President of Israel and many members of K’nesset boarded their planes to the US for this conference, the controversy hopped aboard right alongside them. President Reuven Rivlin and former Foreign Minister Tzipi Livni both criticized Breaking the Silence in their speeches (the latter quite harshly) in the first ninety minutes of the conference. But there was an immediate response in the break-out sessions that followed, where multiple panelists, without being asked, went out of their way to defend Breaking the Silence, their leadership, and the human rights work that they do. Avner Gvaryahu, an activist with Breaking the Silence, had the chance to make his case for the organization in a later panel, and the room was standing-room-only, full of people looking to decide for themselves. 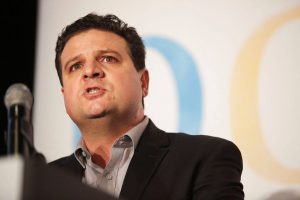 5.   The language of “justice” and “human rights” won out over the language of “peace”
In one of the more memorable moments of the conference, panelist Amal Elsana Al’hooj bluntly stated, “The Palestinian issue is not an instrumental thing. It’s a human rights thing.” Her remark encapsulated a sentiment broadly expressed, both explicitly and implicitly, by many others at HaaretzQ. For decades, two-state supporters have argued that two-states for two-peoples is the best way to achieve an enduring peace. Implicit, of course, is that “peace” is the goal. Many at HaaretzQ, though I’m sure they do not identify as “Anti-Peace,” their rhetoric is focused on justice for all people and not peace between two peoples.
If you are interested in following what else was discussed at HaaretzQ, you can watch videos of all the keynote speeches here and follow reactions from dozens of live-tweeters (myself included) at #HaaretzQ.