Aaron Hodge Greenberg Silver is a Minnesota-based artist and graphic designer. A couple weeks ago, his papercut of the words “Black Lives Matter” on an open tallis went viral online. The tallis hovers above the Hebrew from Mishnah Sanhedrin 4:5, “Anyone who destroys a life is considered to have destroyed an entire world; and anyone who saves a life has saved an entire world.”
Certainly for me, seeing those words wrapped in a Jewish prayer shawl, tied to one of Judaism’s central ethical tenets, hit me with a surreal gravity and seriousness. The black on white incisions reminded me of apocryphal  stories that the Ten Commandments were written on stone in black fire or, in other versions, carved completely through the stone. The papercut is a beautiful work of craftsmanship, but it’s even more powerful in what it names — the centrality of our faith and our allyship in one of the defining issues of our generation.
Below, Aaron explains the inspiration behind this work, his art, and the place of artistry in a movement for social justice.

What inspired you to make this piece? 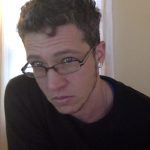 Aaron Hodge Greenberg Silver has been making art since childhood. He’s lived in Teaneck, NJ, New York and Brooklyn, NY, and currently makes his home in Minneapolis, MN, where he lives with a motley collection of humans and animals. When not making art, Aaron spends his time bicycling, rock climbing, cooking, making websites, and building relationships with wonderful people.