Are you marching today? Then you’ll need this prayer for protest by our own Gilttery Rebbetzin: 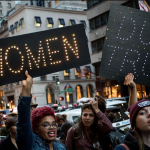 May we find the strength and courage to shout our message loud and clear: hate does not belong here, bigotry will not be a part of Olam Ha Ba…

And where is the Jewish Federations of North American today? Where is the American Jewish Committee? Nowhere. And where is the Simon Weisenthal Center — oh right, its co-founder is up there on the inauguration dias blessing Trump.
Jewschool openly invites guest posts, op-eds, and multimedia submissions from today and the coming days as we celebrate and elevate the Jewish resistance to Trump. Submissions welcomed via our Submit a Post page and at [email protected].

Hillel reaches out to Queers on Campus

In Which Sexism Remains Mysteriously Present.

Is the Daily Show hurting America?