When news broke that the prime suspect for the JCC bomb threats was a young Israeli Jew, I was thrown for a bit of a loop. For months, the assumption had been that the person or people responsible were White Nationalists. In the immediate wake of learning the identity of the suspect, I found myself asking the following two questions:

And while I am all in favor of taking a breath and stepping outside of the collective fear response to have a more rational, empirically-informed discussion, this latest plot twist has done very little to reassure me. A synagogue in Indiana had a bullet fired through its window. Another synagogue in Chicago was vandalized with swastikas and had its windows smashed. Jewish cemeteries across the country have been desecrated. Friends of mine are being sent antisemitic messages with depressing regularity both online and through the US postal service. In short, no matter who is behind the JCC threats, something has changed here over the past year. 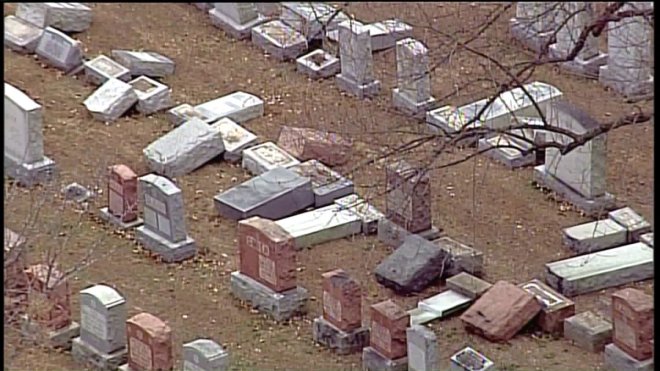 It is important to acknowledge that the winds of bigotry-tainted nationalism always hit the most disadvantaged the hardest and that is still not American Jews. The effects of Trump’s political machinations on the Muslim, immigrant, and undocumented communities make the apparent rise in antisemitism turn a whiter shade of pale and our priority should be allying with and protecting those communities. Nevertheless, the bubbling up of antisemitism over the past year in this country is not a figment of the media’s imagination as some would have you believe. Nor is it absurd to lay a significant portion of the blame at the president’s doorstep. Having Jewish relatives ought not inoculate one from charges of antisemitism. Furthermore, as with other forms of prejudice, antisemitism doesn’t require personal animus for it to function in the world.
One can, for example, say something that one thinks is a compliment, like telling a room full of Jews that they are “negotiators,” and still contribute to the spread of an antisemitic stereotype. One can amplify antisemitic voices by retweeting antisemites. One can give comfort to said antisemites by intentionally leaving out mention of the Jews on Holocaust Remembrance Day. And one can certainly contribute to the spread of antisemitic ideas by running a political ad in which the villains of an imagined international financial conspiracy are three prominent Jews.
The conversation in the media has focused for the most part on whether the president is a misogynist, a racist, an Islamophobe, and an antisemite. The more important questions are how this president throughout his campaign and in the early days of his administration contributed to these social ills through his statements, acts of omission, and now policies. In the wake of the arrest of the JCC suspect in Israel, the newly appointed Attorney General said “The Department of Justice is committed to protecting the civil rights of all Americans and we will not tolerate the targeting of any community in this country on the basis of their religious beliefs.” When Jefferson Beauregard Sessions III can manage that and the president of the United States has to be pressured into making any kind of statement on the subject, it’s perfectly reasonable to discuss the contribution that the president has made to the rise of antisemitism in 2017.
Why the individual who called in these bomb threats did what he did is an interesting question that we may never get a satisfying answer to. But what no one should wonder is whether or not threatening Jewish community centers constitutes an act of antisemitism. It does and regardless of the perpetrator’s background and motives, this person has contributed to the antisemitic atmosphere in this country. An atmosphere that the negligent narcissist currently occupying the White House bears a great deal of responsibility for.

There is Probably Something in the Food, or, a Discussion about Birthright and Propaganda