We in the American Jewish community, as a general rule, treat our kids like they are stupid.

They are not, of course. But, as I have written before, we treat them that way when it comes to teaching them – or not teaching them, as the case often is — about Israel and Palestine, or especially about actual Israelis and Palestinians.

We invest so much in challenging our kids to be good Jews, to wrestle with their faith, to take on difficult issues in the world, to proudly stand up to hate when they see it. Because they are Jews.

But when questions come up about Israel and Palestine, we only allow two options — unquestioning support for the Israeli government or BDS – and assume that our kids can’t handle any of the nuance and wisdom we expect they bring to their religion, to social justice, to their communities. We do not treat them the way we do in these other areas but instead just want them to feel “connected” and to support the State of Israel and to do so without question. Because they are Jews.

So when young people who are deep, questioning, and committed to doing good in the world, and who also find a calling to move to Israel do just that, what happens? What happens when they get to Israel, serve in the army, and realize that their education in the American Jewish community actually didn’t educate them at all?

This month, we have the opportunity to hear from a group of these American Jewish success stories as they tour the United States. Those who decided to follow through on their commitments to Judaism, the Jewish people, Israel, their families, their histories. Young people who chose to move to Israel so that they could serve in the IDF and protect Israel as what are called “lone soldiers” (because they do not have immediate family ties there).

Then they lived the reality of the Occupation. Now they are breaking their silence.

Becca Strober grew up in a very connected Jewish household in suburban Philadelphia. She comes from a Jerusalemite family, some of whom were followers of Jabotinsky (more on that later).  She was active in all things Jewish in her community – youth group, camp, social action projects — through one of the most prominent synagogues in the region. She notes she would have scored an “A+” on an exam given by her Hebrew school or the local federation about Israel, and she felt very connected. So after a year on the Reform movement’s high school program in Israel, she decided to make Aliyah to help preserve the continuation of the Jewish people. No better place to start than by serving in the IDF. Her family, especially her Israeli relatives, were thrilled.

(Photo of Becca Strober; photo courtesy of Breaking the Silence)

Benzi Sanders’ story is a very different one. Benzi grew up in the Lower East Side and was educated in the modern Orthodox community of Manhattan. For Benzi, Israel was there but not a prominent part of their lives. He never visited as a kid; it was mostly the place his classmates brought back kosher gummy worms from. But after graduating from day school and because it sounded worth a shot, he decided to move to Israel and participated in programs at American yeshivot for two years, and then spent a third in the settlement of Ma’aleh Adumim. His passion for Israel was fully ignited and grew more intense throughout his time, and already during his first year, he decided he would make Aliyah to live in Israel and serve in the IDF. Living as a kid in New York City during 9/11, the opportunity to serve on the front lines to protect Israel and fight terror was a compelling one. 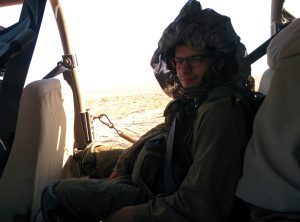 (Photo of Benzi Sanders; photo courtesy of Breaking the Silence)

Yet for Benzi and also for Becca, despite their starkly different journeys to service in the IDF, their conclusions were the same: service in the IDF, particularly when serving in the West Bank, was far less about protecting Israel and fighting terror than it was about maintaining and expanding the system of Occupation. Each of them had had a sense that there was a difficult situation in the Occupied Territories but in all of their years of Hebrew school, day school, family and community in the United States, they had heard nothing about what they were actually called to do and support.

Becca realized early on in her service that her premise of being able to be a soldier in the “most moral army in the world,” and perhaps be a soldier even more moral than others, was false. As she trained soldiers for one mission after another, it became clear that these missions were not about protection of the State, that the explanations provided by senior officials simply didn’t add up.

Benzi, too, started to question things quite quickly. His unit mates and he wondered frequently why they were sent on raids, especially around Nablus, simply to harass the local population? Or to arrest young Palestinians for protesting against road closures and other policies that impacted their lives so significantly that they had no choice but to protest? Or deny an old Palestinian couple the right to pick leaves from their olive grove?

The 2014 Gaza war, especially, prompted both to question the entire system, and neither believed the explanations from the government nor felt the almost instinctive and habitual communal responses of native-born Israelis to fighting another war.

As each started to deal head on with their questions, they realized even more acutely what the term “lone soldiers” meant. Their upbringing, their communities at home, had not prepared them for this, and their adopted homeland was becoming increasingly polarized, moving away from democratic and humanistic norms and closer toward general acceptance of permanent Occupation.

They each felt alone, even if more of Benzi’s comrades were also questioning their service. But being from both communities made it just that much harder to know where to go and who to talk to. They eventually found Breaking the Silence and are among a small group on this first–of–its–kind tour (you can read more about the tour here from Ha’aretz, read their joint letter here and find much morre background and remaining tour dates here; and a note also that Becca is now a Breaking the Silence staff member).

(Photo of tour event in Boston; photo courtesy of Breaking the Silence)

Accounting to Themselves and Refusing to Be Silent

Ardent Zionist Ze’ev Jabotinsky, whom some of Becca’s relatives followed, wrote in 1911, in an essay called “Instead of Excessive Apology,” designed to assure Zionist supporters they had nothing to be remorseful about when it came to their actions in Palestine:

“We do not have to account to anybody, we are not to sit for anybody’s examination and nobody is old enough to call on us to answer. We came before them and will leave after them. We are what we are, we are good for ourselves, we will not change, nor do we want to.”

That, more than 100 years and many political realities later, sums up the American Jewish community’s approach to the debate. Israel can do no wrong, or at least if it does, it’s not for us to talk about. After all, the thinking seems to go, we survived the Holocaust, we are experiencing a real and terrible rise in anti-Semitism, and there are terrorists in Palestine and the Arab World. We need not account to anyone, we need not change unless we decide to, and no one has the right to question any of it, least of all those not living in Israel, Jewish or otherwise.

These lone soldiers show us how wrong that thinking is.. They have sacrificed from personal motivation and belief in the Jewish people and the State of Israel. They felt the call to the mission of protecting the Jewish people before their military service, even if Jabotinsky’s words would likely have more or less captured their views growing up.

Now, as Benzi told me, they still feel committed to a mission. In the same way they felt committed before, only now the mission is to tell people the truth — and demand that others do the same. To hold themselves and their communities – both Israel and the American Jewish community – to account.

Although they have what seems to be the ultimate in credibility to speak to American Jews in this way, they themselves would tell you — indeed are here right now to tell you — that we, too, who are not in Israel, must educate American Jewish kids and ourselves about reality, not the world we may wish was true. And once educated, those kids — and their parents — must also be called to act like these lone soldiers have, because they are Jews. Because we are Jews.

These lone soldiers are indeed what they are: those who can speak to, and hopefully bring about, change from a unique place and with a powerful voice.

Don’t treat them, or those who hear their stories, any other way.

Suspicion in our Eyes and Terror in our Hearts: "They Are All the Same"

The relationship between a Jewish identity and a political identity