On the first day of Holy Week I sat on the floor with the other penitents chanting and singing words both ancient and modern. We sang “Oh Lord prepare me to be a Sanctuary,” and then we chanted: “It may be the holiday season but Amazon sucks for so many reasons.” 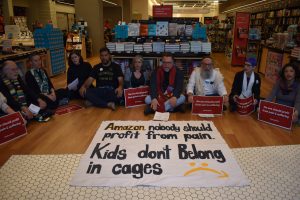 It was the first day of capitalism’s Holy Week, the week of Thanksgiving, which, to be honest, starts capitalist Holy Month.

Sitting in an Amazon store protesting with the slogan: “Amazon, don’t host hate,” we were calling attention to the fact that Amazon provides cloud services to the Department of Homeland Security (the umbrella agency of which ICE-Immigration and Customs Enforcement is a part) and to Palantir. Palantir has a contract with ICE to provide data analysis and digital profiling tools. In short Amazon is profiting from the pain of children who are put in cages and refugees who are dying in the custody of ICE and CBP or being abused by them. Twenty four immigrants have died in the custody of ICE or Border Patrol during the Trump administration. At least seven of them were children, the youngest of which was two.

Over one hundred Angelenos, on a classic sunny Southern California fall day, disrupted the acquisition rituals of shoppers at the Westfield mall. We marched around and had a program at which clergy and local elected officials and a former Amazon worker, took the tech giant to task for its collaboration with the anti-immigrant machine. Then, we shut down Amazon for a few hours. Eleven of us—a multifaith and multiracial group of clergy and lay folk—shut down the brick and mortar Amazon store for a few hours, by sitting in the store and refusing to move. 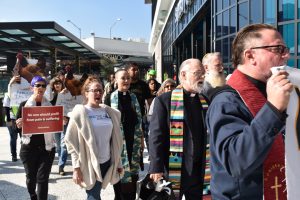 The manager directed LAPD to arrest us for trespassing and we were removed from the property.

In a few days we begin the celebration of Hanukah. The holiday’s “true” origins is wrapped in a couple thousand years of tradition. The message that we, the Jewish community, have brought with us through the centuries is that we are celebrating the resistance to an Empire who wanted to destroy Jews and Judaism. An Empire that, both literally and metaphorically, wanted to defile our holiest spaces and beliefs. It was both a physical and spiritual war. There was an army and an occupation. There was a lot of killing and death. There was also the pull of the amphitheater and the circus. The pull to assimilate to Greco-Roman norms and leave Judaism behind.

The resistance came as both a guerilla war, and also as the stubborn insistence to continue practicing the religion. Ultimately purifying the sacred precincts and restoring the eternal light to the candelabra in a miraculous display which signified the return of God to the Temple.

Those who were drawn to the material and muscular culture were called Hellenizers. They were seduced by the power of the Seleucid armed forces and also their idols and body worship. Today’s Hellenists are lulled by the access to power, and the misguided belief that power will save us. We are living in a bizarre time in which the Hellenists wear the garb of the pious. At a speech to the Israeli American Council, a front group for Sheldon and Miriam Adelson’s money, Trump trotted out the well-worn antisemitism of his heart. The Jews had no choice but to vote for him because all they cared about was their money. “A lot of you are in the real estate business, because I know you very well. You’re brutal killers, not nice people at all,” said the president. And the Jewish audience laughed and applauded.

They laughed and applauded the president and his entourage who were enmeshed in an administration which was killing people at our borders. How does this happen?

We are still, on the whole, winning the soft power war against assimilation to the cruel ideologies of power. The Jewish community, as a whole, is still arrayed with those who want to open the gates and not with those who want to cage the children. However, the Hellenists are getting louder and bolder. Parts of the Jewish community, and to our shame, those parts that clothe themselves in the piety of observance, are being drawn to the siren song of power, and the

For this reason it is so important to reclaim the term disruption. Those who fancy themselves disrupters of this or that economic sector are merely coming up with new ways to do the same old thing—create desire and make money. It is time to disrupt capitalism itself, to challenge the value structures which allow greed to numb the moral intuitions.

We are living in darkening times. (As the prophet sings: “It may not be dark yet / but its getting there.”) There is a white nationalist in the White House. Jews, and black and brown people are being shot down in synagogues, churches, and on the street. This is not a time to sit on the side. This is the time to put our bodies in front of the machine. (This is a time to find your community, your local organization, and get trained in nonviolent direct action and civil disobedience.)

We have to take the light of Hanukah—the story of resistance and triumph that we have preserved for centuries—out to the streets. We have to remind ourselves that we should be a beacon for those seeking refuge, not a wildfire consuming the world’s resources and the most vulnerable of its people.