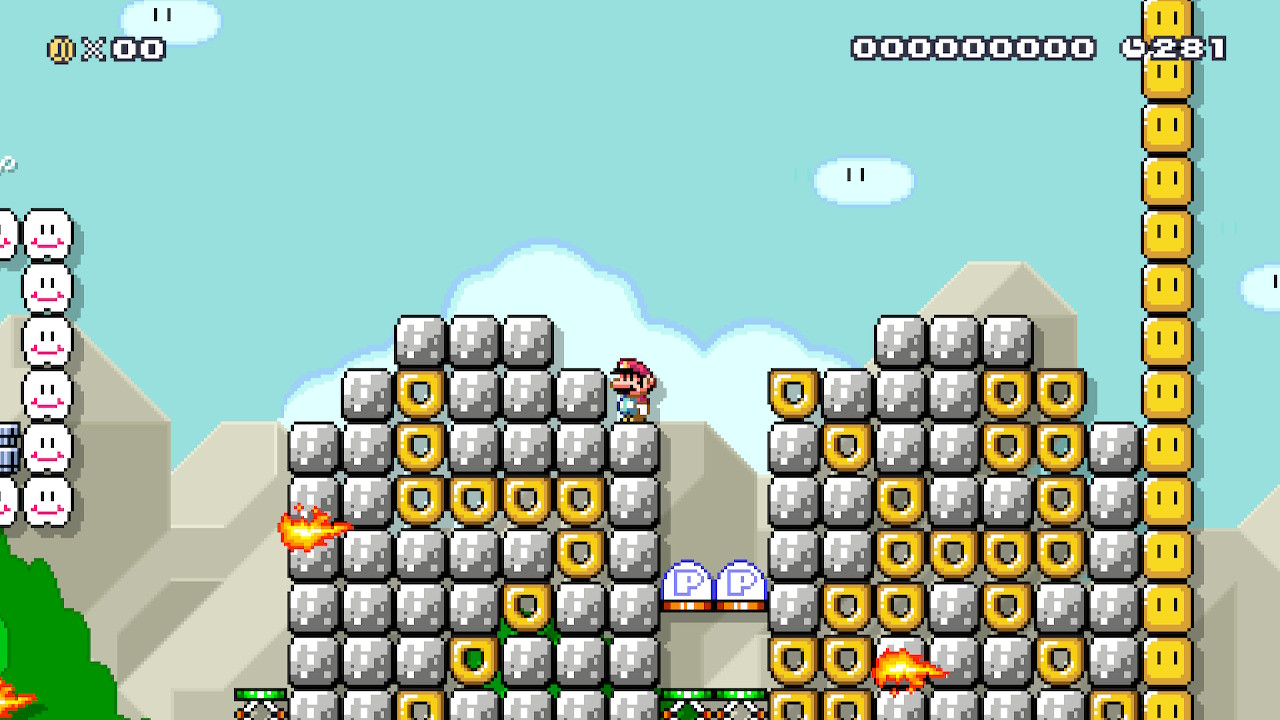 I was home for Passover this year, and visiting with my nephews (ages 8 and 5), with whom I share a great love for the Nintendo Switch game Super Mario Maker 2. If you’re unfamiliar with the series, it provides a drag-and-drop interface for creating your own Super Mario Bros. levels. You can also access levels made by other players, so there’s literally millions of levels to play.

My nephews are growing up relatively secular, but they’ve come to love my family’s Passover seders, especially the play they get to put on during the maggid portion. This year I thought — could I use Mario Maker to create even more educational excitement for them?

My first level, “10 Plagues for Passover” (Course ID: ML3-9VW-RHF), is probably my masterpiece. Highlights include: lava for the bloody sea; Frog Mario suit for frogs; falling icicles for hail; and defeating Roy Koopa (Bowser’s oldest progeny) at the end. And it’s a hard one, too! At the writing of this post, the level only has about a 6% clear rate. I’d call it educational, but the only way to get all the references is by knowing the plague story already.

My second level (Course ID: WNN-BVY-BFG) is “Who Knows 1,” which is designed to help teach them all the parts of the song. It presented an exciting artistic challenge — how do you use Mario game elements to represent God? With help from my (Rabbinical student) partner, God turned out to be a whirlwind bracketed by two flames, a far more iconoclastic result than my first attempt, which was to make God into a giant ‘Boo’ ghost. The three “papas” were three Bowsers; the four “mamas” were four identical versions of Wendy Koopa, the only female boss in the game. You get the idea. And it would’ve been quite educational… if my nephews didn’t just speed through the whole thing!

My third level (Course ID: F31-RQ1-XTG) is “Sea of Reed,” and has very little resemblance to the mythological parting of the waters. The only part that felt clever was placing Monty Moles on top of Wigglers, and then having the waters rise until “horse and rider were cast into the sea.”

I created another level recently (Course ID: BT3-XTQ-JXG) called “Mission at Mt. Sinai,” in honor of Shavuot. It requires Moses/Mario to climb to the top of a mountain, with the course completion condition that he carries a block from the top all the way to the finish line. There’s a lot of fire, and that’s about it in terms of Biblical tribute.

So, what have we learned here? I don’t think my nephews learned much, and my main takeaway is that Super Mario Maker 2 is an exciting art form. But perhaps I could dare to dream — what if I had challenged my nephews to make their own levels (after learning the stories)?

Perhaps the weirdness of representing the Jewish mythology in a video game could be a stimulus for further conversation — why is this level different from all other levels? What is the meaning of possible parallels and divergences between Moses and Mario? Both are heroic and characterized by facial hair, but one draws purpose and strength from his role as an intermediary between God and the people, while the other (at least in the narrative-free world of Mario Maker 2) usually pursues the goal for no particular reason, assisted only by power-ups. The death of Moses marks the end of a people’s journey; the death of Mario is just the precursor to his next life.

With Shavuot coming soon, the “Mission at Mt. Sinai” level feels especially resonant. The traditional story places all the drama at the base of the mountain, and we are usually invited to place ourselves there, among the people, ready to receive. But what if we see ourselves as Moses/Mario instead, facing the perils of physical and spiritual ascension and descension? The people awaiting Moses feared that he had died, a risk that Mario indeed faces again and again.

Perhaps, most importantly, we should focus on the false “ending” to both the Shavuot story and any particular Mario level. Moses brings down the tablets, and everyone lives happily ever after? Mario brings down the “tablet,” reaches the flag, and flashes his classic peace/victory sign, and enters the castle, to live out his days in peace? Hardly. After this mission is complete, more challenges await in the desert (or the castle or underwater or haunted house).

Matthew Lowe is a licensed psychotherapist with a background in theology and philosophy. He lives in New York City with his partner Naomi Zaslow, a 5th year JTS Rabbinic student who has been the primary enabler/promoter of video gaming during the pandemic.