Remember last month when, writing about the Kaffiyeh Yisraelit, I said “in hipster enclaves such as Berlin and Brooklyn, the kaffiyeh is so ubiquitous it’s already passe [and] as a fashion item it is viewed by many in the Palestinian solidarity movement as a trivialization of the Palestinian struggle”?
Well, the kaffiyeh just got 10 TIMES MORE PASSE and 10 TIMES MORE TRIVIALIZED, thanks to Urban Outfitters (proprietors of the once famed money grubbing Jew t-shirts) who are now selling a variety of different colored kaffiyehs as — get this — anti-war scarves. 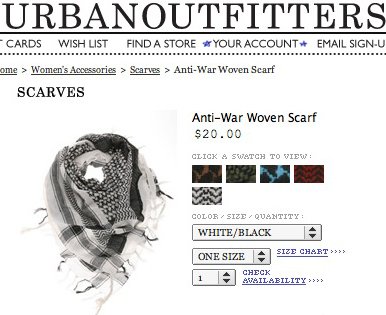 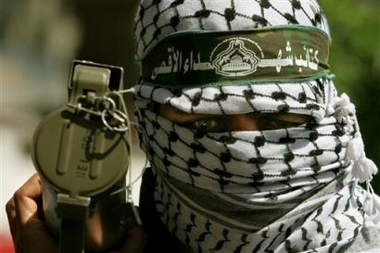 As you can see, it goes quite well with the anti-war RPG launcher.

It also functions rather nicely with the anti-war AK-47. 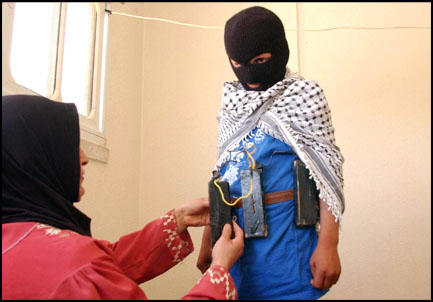 And, of course, don’t forget to accessorize with the matching anti-war suicide belt.
(Now available in children’s sizes.)
Considering the fact that Urban Outfitter’s CEO is a huge financial contributor to both the GOP and Rick Santorum’s PAC, you have to wonder if this was an intentional attempt to water down the cause celebre. “Well that ought to kill these things off once and for all…”
Yet I suspect it may have the opposite effect. Every ignorant kaffiyeh wearer (of which there will now be thousands) is a potential anti-Zionist convert, whether engaged by the pro-Israel camp or the pro-Palestinian camp. The pro-Palestinian camp will elicit their sympathy, using the kaffiyeh as an opportunity to engage them in conversation, while the pro-Israel camp will simply shout epithets at the wearer and terrorize them into Jew-hatred. (I’m sure some readers are already ramping up their e-mail clients to send nasty letters to URBN.)
Oh, how capitalism trumps all allegiances…
(c/o Weird Jews)

Is THAT a SHTRAYML you are wearing Mr. COSSACK?