Guest post by Micha Odenheimer
A new Israeli based program called Tevel b’Tzedek (that’s a phrase from the psalms–in English it would translate clumsily into “the Earth–with Justice) has just finished its first 14 week session in Kathmandu Nepal. Tevel b’Tzedek’s program is designed to expand Israeli and Jewish consciousness about globalization, ecology, and the struggle of the poor in “developing” countries, and to give expression to the call for social and economic justice emerging from Jewish texts and traditions. Although in the first session virtually all the participants were Israeli, Tevel b’Tzedek is actively recruiting American Jewish candidates for the next session, which will begin October 14th and run until January 21st.
The first session of Tevel b’Tzedek was a huge success. Besides intensive learning–including 30 hours of Nepali language “ulpan”, each participant interned with a local Nepali organization, working with street children, women’s empowerment, appropriate technology in villages, education in slum schools, and other areas. In addition, Tevel b’Tzedek attracted dozens of Israeli and Jewish travelers to short term volunteer activities–including planting trees to prevent erosion in a squatter settlement by the Bishnumati river and creating a giant picnic for street kids. Studying texts from the Torah and Prophets to Levinas and Walter Benjamin, Tevel also had a rich array of Nepali lecturers–from the commander of the Maoist rebel army (now part of the Nepali government) to the chairman of the Nepali Federation of Indigeneous Peoples.
The program is free–Tevel b’Tzedek provides the housing, food, and instruction–participants pay only for their plane ticket, health insurance and visa. Its open for people from the age of 20 up, with some knowledge of Hebrew a decided advantage. For an application form and more information, you can write to tevelbtzedek at gmail dot com.
See also: Israel21C, “Israelis teach social justice ‘out of their backpacks’ in Nepal” 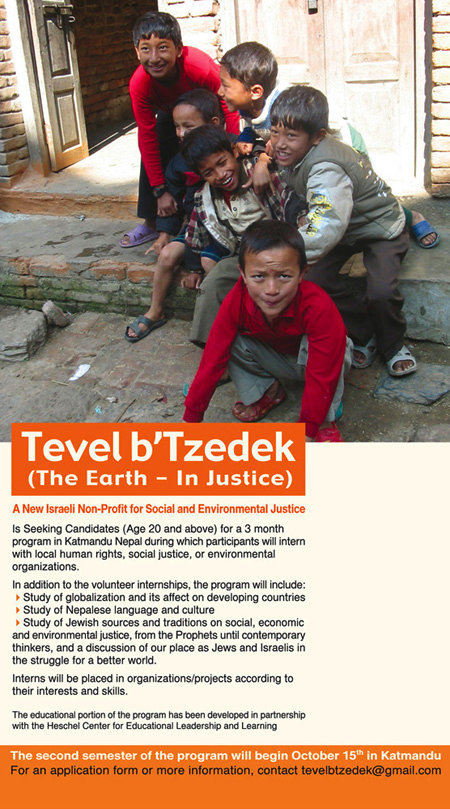