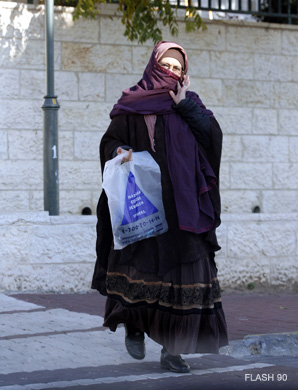 All over the blogosphere , just in case you’ve missed it: the Forward Failed Messiah, the London Jewish Chronicle (and others), are talking about the new Jewish burqa (actually it’s hijab, but let’s not be overly technical).
Apparently, a small contingent of ultra-Orthodox women Ramat Beit Shemesh, near Jerusalem, started this, and it has now spread to other communities.
I have to say, I’d label this post as humor, except – it’s just not funny. It ‘s sick, and unsurprising, and perfectly in line with the general increasing of controls on women, and the associated ideas that women are a contaminating force. It is in fact, the logical outcome of years of shameful perversion of halakha .
Miriam Shaviv of the Chronicle states pretty clearly – and persuasively- why she thinks this has happened:

And yet, the “frumka” is the logical extension of two clear trends in the frum world.
Firstly, standards of modesty are becoming increasingly stringent and require increasing effort to follow. A CD recording by a top rabbi from Lakewood, New Jersey, for example, reportedly asks women not to swing their arms while they walk and not to allow their daughters to wear colourful banana-clips in their hair. Women know that if they wear skin-coloured stockings, they must include a seam so it is clear they are not bare-legged. Schoolgirls do not wear shiny shoes that could “reflect their underwear”.
Paradoxically, the Orthodox world’s attempt to create a generation in which physicality is minimized has resulted in a generation obsessed with looks, clothes and sex.
Secondly, tznius, or modesty, has long moved from being about modest clothing to being about keeping women, and images of women, away from men.
Open a Charedi newspaper, and there are either no images of women, or they are blacked out. In the past few years, several women have been beaten up in Jerusalem because they would not move to the back of the bus in Charedi neighbourhoods; a top rabbi in Bnai Brak asked women to leave before the end of shul so they did not mingle with men following davening; that same town has a street with separate sides for men and women; separate shopping hours are not unknown.
Just last week, a sheitel shop in New York was boycotted for refusing to remove headshots of women wearing wigs from its window.

I also recommend reading the comments over at Failed Messiah, which are quite interesting.