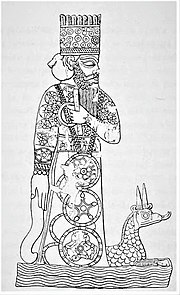 The Secular Humanists have more:

I wonder if this fertility rite, which gave birth to Purim, has left it’s initial meaning with us in the form of tri-cornered yannic sweets full of tiny seeds. The hamentashen, of course, originally were filled with poppy seeds. The yiddish word for these seeds, mun, when combined with the name for pocket, taschen, gave rise to the modern word. I first heard this linguistic history from Marga Hirsch. I suspect though, that it isn’t so simple as being an Akkadian fertility cookie since it seems to have popped up in Eastern Europe. Is there a Sephardi or Mizrachi equivalent?
I should also point out that, as tight as the case may seem there is some substantial dispute on whether our near-eastern holiday with similar sounding characters is, in fact, related to older near-eastern rituals, holidays, etc. I haven’t weighed deeply into the linguistic analysis but my initial read is that most of the blowback is by Jews who are shocked, SHOCKED, to hear that many of our hagim are re-framings of pre-existing holidays. Perhaps they believe that someone else having something similar clouds our specialness or makes it seem less clear that ours is holy and theirs is a corruption of God’s word. I don’t worry about those things. (More accurately I worry about them insofar as people worrying about them is worrisome and damaging to world peace.) The case seems a pretty good fit, so let’s sit back, read megillat Ishtar and enjoy our deeply western-semitic story. Perhaps if you want to get very close to the original Purim, you might want to edge more in the direction of bacchanalia.

In Defense of Torat Chaim