Organizations like Bema’aglei Tzedek are a huge part of why I love Israel and I’m committed to it. To me, Israel via organizations like Bema’aglei Tzedek represents the best chance the Jewish people have to take the prophetic values of chessed and tzedek and make them systemic realities. We have a long way to go and the way isn’t so clear, but there are good people and good organizations blazing some serious trails. Baruch Hashem. Here’s what I found to be a powerful example of their work (from a recent newsletter): 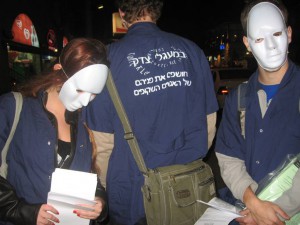 This past Wednesday evening, a group of twenty Israeli high school students, who participate in Bema’aglei Tzedek’s “Employment Advocates” initiative, chose a unique way to mark the Purim season.  Rather than dressing up as their favorite Hollywood actor or sports star, these special students decided to don T-shirts emblazoned with the slogan “Unmasking the Faces of Transparent People” and made to look like the uniforms of contract workers – the 200,000 or so cleaning personnel and security guards in Israel who are extremely susceptible to exploitation at the hands of their employers – as well as white masks.  Imbuing new meaning into the Israeli tradition of Purim parades, these students marched around the center of Jerusalem, attracting much attention, and handing out information packets to passersby about the plight of contract workers as well as booklets in Hebrew, Arabic, and Russian to security guards notifying them of their legally-mandated rights.

Gershom Gorenberg at Sixth & I