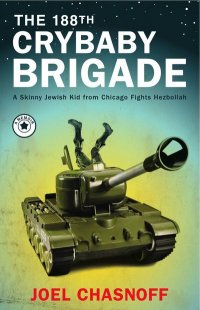 The effectiveness of the Israeli Defense Forces is a miracle. Reading Joel Chasnoff’s humorous memoir, The 188th Crybaby Brigade: A Skinny Jewish Kid from Chicago Fights Hezbollah, you’ll find it’s a miracle they haven’t lost a major war yet. (Drum snare please.)
I’m no stand up, but Chasnoff is, which is where his book begins: as a wannabe comic going nowhere fast, he enlisted for a year in the IDF. The resulting hijinks with boot camp, the pushy parents of his Mizrahi girlfriend, and ultimately fighting Hezbollah in Lebanon became fodder for 270 pages of Israel-Diaspora satire.
But this isn’t Dad’s copy of The Jewish Book of Humor, put down the drum snares. Chasnoff’s straight man is himself — us Americans and Diaspora Jews by extension. Our assumptions (fantasies, really) of kickass, hardcore Jews become the joke just as much as the unprofessional (and deadly) antics of his platoon mates.
You learn a lot of military vocabulary through Crybaby. Most important, it seems, is mefageret — retard. In loyally reproducing the conversations of a teenage army, we learn the Hebrew for fuck up, whore, coward, dick, moron, disgrace, nincompoop, momma’s boy, zealot, and your mother’s cunt. What behavior could we expect from combat units staffed and run by 18- to 22-year-old males?
Male pride and military enthusiasm culminates with the most morbidly funny vignette in the book, “The Unluckiest Dog in Lebanon.” One night patrolling in Lebanon, Chasnoff sees the only action of his service: a heat signature through his Merkava tank’s night vision that could be a terrorist. Everyone awakes; the alarm is passed up the chain; the order comes to fire! Then Chasnoff identifies the “terrorist” — it’s a dog. A dog. Fueled by combat adrenaline, his commander nonetheless fires several shells. Several. Check the book for the conclusion.
The incident symbolizes the moment where the reality really kills the myth. All the training and technological mastery crescendos in a moment of absurdity. And humor is the only way to make sense of it.
I like this book because it shows us Israeli society at it’s most simple: as fickled and stratified as any other. Despite their bonding by shared boot camp hell, his fellow soldiers are awarded rank and job by virtue of racism. The whites become commanders, the Russians get second best, the Mizrahi get the worst. We may think all Israelis are heroes, but we count the notable percentage of his unit that didn’t pass boot camp. The book features cowards, drop outs, and the criminally reckless. A veritable alternate dimension.
I appreciate most that Joel Chasnoff doesn’t hit us with reality like a punch to the face. (As perhaps I am wont to do.) Instead he slowly and steadily pops our little sacred cows one by one, like a square yard of bubble wrap. It teaches as it pokes fun and it loves as it admonishes. Laughing makes both the Diaspora and Israel normal, even humble. I would highly encourage the use of this book by educators.
Ultimately Crybaby is a good book because it’s not a canned laugh track but a well-written story about a relatable Jew seeking manliness as America defines it. He comes of age not when he masters his tank or shows off his gun (see the trailer for that bit), but when he sees Israel for what it is and not what he wants it to be. And that, even if the book weren’t funny, would still make it touching and totally worth reading.

I Introduce To You: Our Ghosts

Israel reported as the 4th largest arms dealer in the world