Your life is a mess. You’re tired of the routine, you’re constantly craving more of what you’ve already attained, and you find true satisfaction in nothing and in no one. Well here’s the quick fix:
1. Plan an expensive get-away.
2. No, actually, scratch that—plan three expensive get-aways.
3. But it’s not just the location that’s getting to you. You’re also sick of your significant other. So dump the schlub, give no real reason for your decision to break-up, and then…
4. Swear with almost-compelling adamancy that you’re not looking to be in a relationship—
5. then sleep with a string of people who look nearly indistinguishable from your former sig-o. The key here is that they all must be young, virile, and totally whipped.
6. All the while, make sure not to deny yourself any culinary pleasure.
7. Gleefully declare your independence from weight concerns, as you claim to gourmandize your way around the world, eat more—while still fitting magically into your ever-expanding wardrobe of size 2 sartorial splendor.
8. Seek counsel from at least two oppressed Third World women who are visibly ‘ethnically Other.’
9. But in the end, make sure that it is you who gives them advice. After all, what are you if not the paragon of discipline, self-control, and loving-kindness?
10. Find yourself…in the arms of a ruggedly handsome Brazilian.
Summarized  (in case we’ve lost you already): Eat without gaining weight, pray without believing, and love without…well, loving. In case you have not sacrificed 133 minutes of your life watching the film adaptation of Elizabeth Gilbert’s best-selling Eat Pray Love (which I have not read), the 10 rules outlined above will help you attain enlightenment, according to the film’s impeccable logic. Writing a review of this film, pointing to its almost laughably offensive hypocrisy and disturbingly classist, racist, and sexist messages, is like shooting fish in a barrel, and many have beat me to this task already. Instead, I want to reflect on the larger trends that this film and the book upon which it is based represent and how we can use Judaism to deal with some of these cosmic issues that the EPL cult supposedly tackles and resolves.
In this month of Elul, leading up the earlier-than-usual battery of Jewish holidays this year, we are charged with the task of intensive cheshbon nefesh, a kind of introspective reflection on our actions over the past year.   In the current climate of crassly classist and gender-coded self-help quick-fixes, traditional Judaism offers us a much-needed antidote to the kind of ‘me first’ mentality of NSA new-agey spirituality that this film so strikingly

emblematizes. EPL has to be one of the least Jewish films  out there: despite the protagonist Liz’s insensitive and exploitative treatment of most of the other characters in the film, never once does our well-fed world-traveler express any genuine remorse for her cavalier treatment and attitude towards others.  Perhaps most notable in Liz’s string of careless actions towards others is her bizarrely under-explained, sudden, seemingly arbitrary abandonment of her spouse at the very outset of the film. While classically “Jewish guilt” can be stretched to unhealthy limits, at the very least it affirms that which is most essentially human about us—our ability to feel, our ability to be accountable to others.
In Avot d’Rabbi Natan, chapter 41, we are told that we should regard even the slightest wrong we commit against another with utmost seriousness; whereas we should not dwell on the good deeds we have performed for others.  This is a near 180 reversal of the EPL approach which dangerously conflates boundless personal enlightenment with boundless self-entitlement.  In the EPL film, protagonist Liz Gilbert’s single outward act of kindness to others –the scene in which she ‘selflessly’ emails her friends, appealing to them for donations to help a natural healer and her daughter build a house in Bali—is piously prefaced by Gilbert’s self-righteous declaration that this request comes in lieu of her annual birthday celebration. The dramatic montage that follows of her friends receiving the email appeal signals to us that this Liz’s ultimate moment of enlightenment; this is her defining moment of ‘giving,’ Beyond the obviously paternalistic quality of the rich-white-woman-saves-the-struggling-natives, this scene smacks of the kind of  crass, self-congratulatory armchair philanthropy that lulls people into self-righteous complacency:  ‘I’ve written the check; I am now absolved of further responsibility towards my fellow humans.’
Real loving-kindness involves a long-term investment in the sanctity of the Other.  And no, not just that supposedly ‘significant Other’—rather, the acknowledgement of all other people as significant, and the realization that we must invest in them not only materially, but also personally. The way to grow with others is to take responsibility by being present in their lives. What Liz lacks is a sense of rootedness, the sense of unity upon which community is based.  All of Gilbert’s globetrotting points to an inability and lack of desire to commit to other human beings and forge authentic relationships.
Again, it is entirely unclear what exactly propels Liz to leave her husband at the outset of the film—all we’re told is that ‘things can’t continue this way,’ although we see nothing particularly alarming onscreen. In fact, what we see is all fairly typical and benign; Liz and her adoring husband are engaging in light banter.  All we know is that Liz cannot handle her life as it is any longer. What present-day in-vogue spirituality misses is the point that one can actually discover boundless meaning in the routine of real, mundane life. Patience and forbearance might be considered passé, but it’s the real deal.
Case in point: even the National Geographic-quality cinematography, with its wide lens doting lovingly on EPL’s glamorously sun-soaked characters and sweeping, exotic landscapes and, bursting with exuberantly lush colour, still fails to make us love the film or the figures portrayed therein.  In this film, everything—and everyone—is relegated to the status of ambient scenery…a Potemkin village populated by poorly developed stereotypes. Despite a good chunk of the film taking place in India and Indonesia, we are basically spared any unpleasant and ‘unpalatable’ scenes of actual poverty and suffering.
It’s 133 minutes of tantalizing culinary, spiritual, and pseudo-sexual foreplay. Nothing 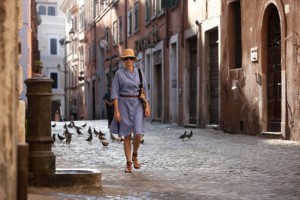 ever really materializes, except for the sheer ubiquity of the material forces driving the ‘action’ (if you can even call it that). Set against only the most breathtaking of landscapes, we watch Robert’s character shamelessly indulging in an endless parade of epicurean delights, nearly interchangeable, conventionally attractive young men, and more generally, snorting up the cocaine of petty affirmation through the regurgitation of self-help platitudes.  EPL, with its ‘money and men can cure all’ approach is panglossian at best, and is inhumanely narcissistic at worst.  In this past week’s Parasha, Parashat Ki Tetse, we read towards the beginning of the portion of the sin of gluttony (Deut. 21:20-21); a gluttonous son technically qualifies for death by stoning. Indeed, death by stoning would have made the film considerably more interesting.
One of the more amusing points of the film, which is replete with instances of consoling consumption and too many delightful moments of conspicuous product-placement to mention, is when Liz seeks “whatever” (let’s just call it that, since her Self seems like a lost cause) at an Ashram, and is told she can purchase a “silence” tag at the bookstore. Even the choice to remain silent must be purchased!  Indeed, instead of appealing the Master of the Universe, we are advised to whip out our MasterCard.
Interestingly, God is never really mentioned in the film. Only at one point, when Liz first decides to “pray,” does she sort of address ‘God,’ but,  like everything else in the film, “God” here functions ornamentally, much in the same way as all of her beaus blend into the landscape as figures she uses instrumentally, solely for the purpose of her immediate personal edification and comfort.  Clearly, Liz’s ‘prayer’ is more a signifying act than a genuine appeal or promise for anything. Indeed, that very brief ‘prayer’ scene typifies today’s NSA spirituality.
According to an April 2010 article in USA Today, a whopping 72% of the members of generation Y in the U.S. self-identify as “more spiritual than religious”: a diffuse, general sense of “spirituality” seems to prevail among the younger generation. Exactly what such figures mean is an interesting question.  Perhaps young people, jaded by the perceived hypocrisy of societal institutions involved in questionable military adventures abroad and 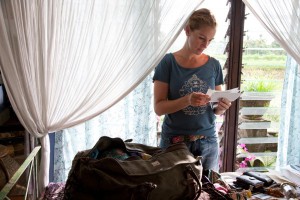 failed economic and social policies at home, wish to avoid the stuffiness of institutional structure as they seek personal meaning.  This avoidance of established institutions, while perhaps explainable, is, nevertheless, regrettable.  While more structured and specifically religious forms of meaning-making can be stifling, this is not the time to abandon all forms of committed/practice-oriented devotion.  If anything, the young have the potential to infuse these older traditions with a new, updated kind of meaning and help build a form of worship and practice that is better attuned to the needs and desires of today’s meaning seeker.  But practice-based, community-oriented religion has received an unnecessarily bad rap these days.
Don’t get me wrong—spirituality is a beautiful thing in its genuine form. But every intention needs a structure—a calendar and a location—and most importantly, a community.  As social animals, even the seemingly solitary act of self-improvement relies heavily on our interaction with others.  Admittedly, at a certain point, it is difficult to draw a line separating ‘religion’ and spirituality.’ Ideally the two converge to create the ultimate meaningful devotional experience. In a way, the two share many of the same potential dangers: exploitative leadership, false promises, extortion of money, and so on. But in today’s cult of “take time for You,” these dangers seem to proliferate with the false comfort of ‘all you can eat’ spirituality that cuts you off from any real sense of empathy, participation and activism. 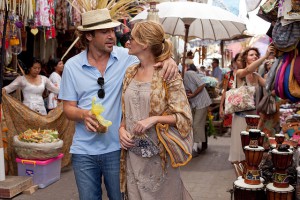 Getting back to the film for a moment though: even in her supposedly most vulnerable moments in the film, there is something decidedly smug about Liz’s spiritual odyssey, which culminates in a neatly-resolved scene where she pursues a relationship with yet another attractive man.  Having found ‘love’ (or at least lust), Liz’s journey comes to a eminently photogenic close. As we move through the month of Elul, it is critical for us to keep in mind that true seeking never finishes in a Hollywood ending, but rather, is more challenging and also more beautiful and infinitely more subtle.
As we reflect on the past year and plan how we can create more genuine religious (or spiritual, if you like) experiences in the year to come, remember the words of André Gide who said, “”Believe those who are seeking the truth. Doubt those who find it.”

Looking for a job in NYC? Uri L'Tzedek is hiring