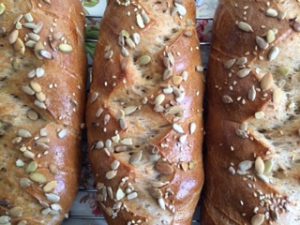 Understanding this changing landscape of culture, history, and industry informs our relationship to matzoh. The best way to understand the mitzvah of matzah is not just to cleanse our homes of hametz once a year, but to really bring the se’or, the frothy culture, the ferment, the messy stuff of life, back into our homes. We should seek to repair our distance from the leaven in our daily lives as voraciously as we try to remove leaven from our lives each Pesach. Perhaps it is as Moshe Chaim Luzzatto says, “It is impossible for [b’nai yisrael] to nourish themselves [without leaven] on a regular basis, for this is not reflective of men’s desired state in this world.”  Whether this means starting a weekly sourdough challah baking practice or learning to ferment your own vegetables, bringing more of the world into our lives 358 days of the year is vital if we hope to meaningfully cleanse ourselves of it for the seven days of Pesach.

The Grinch Who Stole The Latkes

I prefer the first amendment

When the Chickens Went on Strike