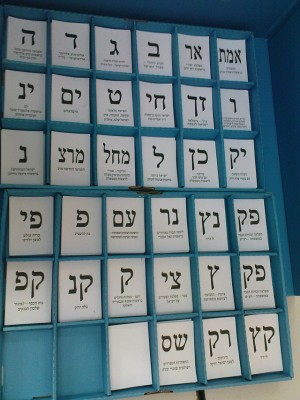 This year we had our largest turnout ever in Knesset March Madness!  The final election results are now in.  (To jog your memory, here’s a guide to which party is which.)

Congratulations to everyone who entered March Madness!  No one scored a perfect 120, but no one scored 0 either.  Regardless of how you feel about the outcome, we hope this was a way to become more engaged and informed about the election.
And now to the winners:
Congratulations to the 2015 Knesset March Madness champion, Liora Halperin!  Halperin, an Assistant Professor of History and Jewish Studies at the University of Colorado Boulder, successfully predicted 113 of the 120 Knesset seats, the highest score in the history of our Knesset prediction pools!  She correctly predicted that Yachad would not make it past the new election threshold, and while no one guessed that Likud would win 30 seats (possibly due to late-breaking switches from Habayit Hayehudi), Prof. Halperin’s prediction of 25 was actually on the high end (the average prediction was 21.3).  She also predicted the exact number of seats for Meretz, Shas, UTJ, Yesh Atid, Yisrael Beiteinu.
Prof. Halperin writes:

The (relative) accuracy of my estimates speaks mostly to the fact that I submitted my numbers somewhat early in the contest, before the predictions about Zionist Camp’s supposed late strength were published. All I could rely on were polls, just like any of us, but I think I relied on older polls than most.
In the end, I’m not surprised. Netanyahu commanded the support of a sizable number of Israelis, whether because they actually agree with his platforms or because they feel more vaguely that Israel needs a strong leader and Netanyahu successfully, if manipulatively (by appealing to voters across several rightwing parties), presented himself to them as such. Some might be appalled, surprised, or incredulous, but the Likud results reflect a significant plurality of Israeli voters: frightened by political currents in the region and abroad, strongly suspicious of Palestinian citizens and non-citizens as well as Jewish leftists, seeking a strong leader, and defiant in the face of internal or international criticism, which many see as based on lies and/or antisemitism. All this points to a society more and more willing to sacrifice democracy for a feeling of Jewish strength and security. These results also, we shouldn’t forget, are indicative of a society that includes significant numbers of citizens who did not vote for Bibi, who do not feel he represents them, and who are likely to (continue to) feel increasingly alienated and underserved, if not blatantly excluded, by his politics. Indeed, the numbers we saw elsewhere in the election returns speak to other real trends in Israeli society: the possibility for Palestinian citizens of Israel to mobilize despite significant internal ideological diversity; the need for the Israeli Jewish left to regroup and redefine its principles; and increasing and widespread concern about cost of living and growing income inequality.
A renewed reckoning with the reality of this Israel is in order, given a leadership (as Netanyahu recently made even clearer) as well as significant segments of society who are clearly unwilling to have political negotiations or make concessions and who display both overt and implicit racism toward fellow citizens. Many of us know that such a reckoning has been in order for a long time and that most of these discussions are not new. I’m sure many of us—Israelis and Americans alike—will be discussing what this reality means both for Israelis of all political persuasions and for American Jews who engage with the politics of Israel/Palestine.

We had a tie for second place:  both Dan H. of Portland, Oregon, and Samuel Bressler of UCLA scored 111.  And so we go to the first tiebreaker question: of the parties that don’t make it into the Knesset, which will come closest?  Dan H. picked the Green Party (incorrectly predicting that Yachad would make it in), and Samuel Bressler correctly picked Yachad, so our second-prize winner is Samuel Bressler!  He also picked the exact number of seats for Shas, Yisrael Beiteinu, and the Zionist Camp.  Bressler writes:

This is not the ideal consolation prize, but it seems I have to take it. Here’s to a brief and ignominious coalition.

Congratulations to the winners!  What do our two top finishers have in common?  They both entered the contest on March 10, a week before the election.  Those who relied on more recent polls were led astray (though it’s not clear whether those polls were actually wrong or whether voters changed their minds in the final days).
Prof. Halperin has won a signed copy of Justice in the City: An Argument from the Sources of Rabbinic Judaism by Aryeh Cohen, and Samuel Bressler has won a copy of Loving the Real Israel: An educational agenda for liberal Zionism by Alex Sinclair.
Finally, we recognize everyone who answered the tiebreaker questions correctly.  For the first question (which party will come closest, among those who don’t make it into the Knesset), the most popular choice was Green Leaf, but the “winner” was actually Yachad, which won 2.97% of the vote and therefore missed the new 3.25% election threshold (but would have made it past the old 2% threshold).  Honorable mention to all those who picked Yachad:  in addition to our champion and runner-up, they were Liam Getreu in Sydney, Australia; Stuart Schrader in Beit Shemesh, Israel; Alan Abbey in Jerusalem; Robert Rand in Philadelphia; Shlomo Zuckier in New Haven; Robert Tabak in Philadelphia; Andrew Vitelli in Tel Aviv; and Richard Goldwasser in Highland Park.
The second question (which party will come in last) was more complicated.  Protecting Our Children — Stop Feeding Them Pornography dropped out before the election (and endorsed Habayit Hayehudi).  We didn’t remove them from the contest form, because the contest had already begun, and we hadn’t established rules for what happens if a party drops out.  (Note to self: Figure this out for next time, especially since this is the second time in a row that this party has done this!  In 2013, they were running under the name One Future.)  And apparently, some polling places were still offering Protecting Our Children as an option, since preliminary election results showed them with 56 votes, though the final results gave them 0 votes (presumably because those 56 votes were invalidated).  For perspective, Protecting Our Children couldn’t have formed a government even if every single person who voted for them was in the Knesset.  (By the way, even though the head of the Arab List announced that he was endorsing the Joint List, the Arab List never officially dropped out, and in fact, they did pretty well, relative to the rest of the long tail.  It is unclear how many of the 4537 people who voted for them actually intended to vote for the Joint List.)  So does Protecting Our Children count as the last-place party if they weren’t technically running anymore?  Since honorable mentions are cheap, we’ll count it both ways.  Congratulations to the following people who picked Protecting Our Children to come in last:  Liam Getreu in Sydney, Australia; Ari Morris in Vancouver; Alan Abbey in Jerusalem; Ira Tick on The Internet; Ezra in Philadelphia; Jon Degani in Petah Tikvah; Brian Finkel in Jerusalem; Eitan Gutin in Silver Spring, MD; Raphael in Berkeley; Josh Freedman in Columbus, OH; Hannah Trate in Columbus OH; zt in Washington, DC; jordan kutzik; Andrew Vitelli in Tel Aviv; and Shahar Golan in Seattle.  And congratulations to those who picked Social Leadership to come in last (which it was, if you only count parties that didn’t drop out): Robert Tabak in Philadelphia, and Melanie Pasch in Tel Aviv-Yafo.
Thanks again to everyone who participated!  We’ll see you again on Tuesday, November 5, 2019 (unless, by some freak occurrence, early elections are called again).