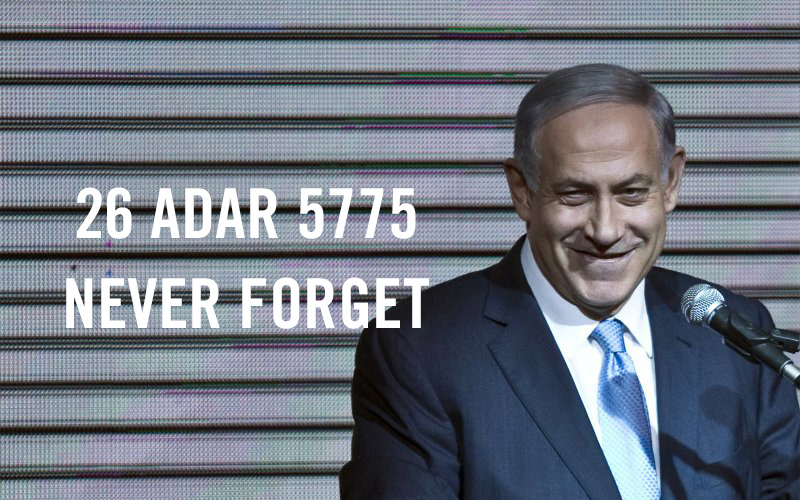 The Day that Two States Died

The Hebrew date of 26 Adar will forever live in infamy as the day Benjamin Netanyahu swept back into power, “rewarded by Israeli voters,” as the Foundation for Middle East Peace’s Matt Duss notes, “for blatantly disrespecting the United States and its president, for rejecting the international consensus in support of a two-state solution, and for shamelessly race-baiting against Israel’s Arab citizens.”
It will also live in infamy as the day when the leadership of American Jewry stood in near unanimous silence as Israel embarked down the road to apartheid.
I have given every opportunity to the Jewish Federations of North America, the American Jewish Committee, AIPAC, and the Jewish Council on Public Affairs to condemn Benjamin Netanyahu’s thrice disavowal of the two-state solution and electoral race-baiting.
I’ve sent repeated emails over the last few days, I’ve phoned each organization, and I’ve repeatedly prodded them on Twitter.
When reached by telephone, one AJC spokesman chuckled at me and repeated me incredulously when I said Netanyahu had “formally disavowed” the two-state solution after issuing a policy statement from his party. “Formally disavowed?!”
But as of this writing, none have dared to speak out against Netanyahu singlehandedly rejecting, while dismissing as naive and destructive, a quarter century of U.S. policy pursued by the North American Jewish community on behalf of the state of Israel. Only one — the JCPA — even bothered getting back to me.
Rather, many Jewish organizations have fallen all over themselves to congratulate Netanyahu on his “strong showing” as the ADL termed it. Even they couldn’t bring themselves to specifically name Netanyahu in their condemnation of “extreme and divisive statements by candidates.” 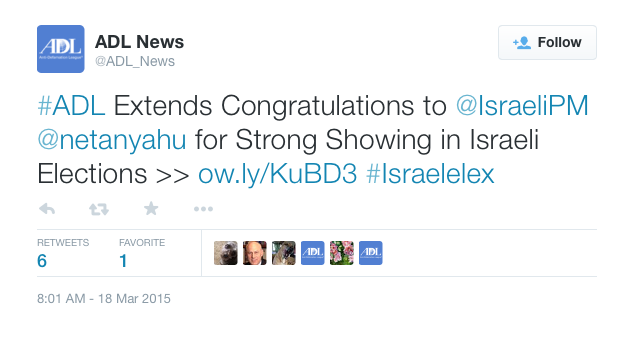 JFNA offered its congratulations “on behalf of Jewish Federations throughout North America” and that “we look forward to working with the future government.” 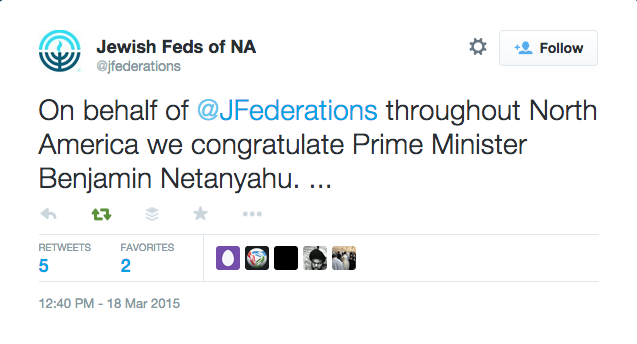 The AJC took a different tack, neither congratulating nor condemning Netanyahu, but instead tokenizing Israel’s discriminated-against Palestinian minority to seemingly defend Israel against charges made by its own former senior ministers — including Prime Minister Ehud Olmert, Prime Minister Ehud Barak, MK Tzipi Livni, and former Mossad chief Meir Dagan — that should it abandon the two-state formula, Israel would become a de facto apartheid regime.
“Israeli Arab Supreme Court Justice Salim Joubran oversaw the election,” they wrote on Twitter. “The Israeli Arab party is the 3rd biggest. And some say apartheid?” 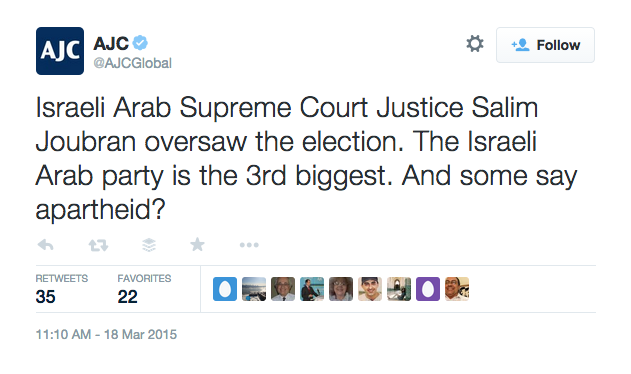 Not a word on Bibi and the two-state solution, however.
The situation was no different this past November when the Knesset voted to apply Israeli law to settlements, effectively annexing those territories by governing them as part of Israel rather than as occupied territory. As has been its practice, the American Jewish community stood by in dutiful silence as the facts on the ground were made ever more permanent.
The abandonment of the two-state formula and the refusal to condemn racist incitement from the Prime Minister of Israel isn’t some kind of earthquake. It’s been a slow tectonic shift happening over the years as the far-right funder class has overtaken American Jewish institutions and shifted them from communal representative bodies into billionaires’ bully pulpits. In addition to spending millions annually lobbying the federal government, the same right-wing Jewish elite established countless Israel advocacy organizations to propagandize on behalf of Israel’s right-wing within the Jewish community itself and to marginalize Jewish critics of the Israeli occupation. This has happened against the backdrop of a decade-and-a-half-long War on Terror and widespread Islamophobic hysteria that seems to have inextricably linked the cause of Zionism to the politics of the conservative right, thereby shifting Zionist discourse towards increasingly extreme ends.


Support for two states remains high in Israel, with polling from this past summer showing 60% of Israelis favoring and only 32% opposing such a resolution. Yet, American Jews, who are significantly more liberal than their Israeli counterparts, are far less supportive of two states and are growing lesser so. In 2003, 54% of American Jews surveyed by AJC said they supported the creation of a Palestinian state versus 41% who opposed it. By 2013, only 50% supported Palestinian independence, with 47% opposing.
During that same 10 year period, Jewish institutions throughout the U.S. enacted policies effectively excluding vocal Jewish opponents of the Israeli occupation from Jewish communal life. And we’re not just talking about JVP (which, ironically, has been marginalized because the BDS movement supports not the one-state solution, but the wrong one-state solution — this one’s a-okay). All-out war has also been waged on the New Israel Fund and J Street for daring to pay more than mere lip service to the two-state solution by actually holding Israel to its commitments. NIF has thus been the target of numerous efforts to have its fundraising efforts impeded in the Knesset and around the globe, while J Street has been excluded from Hillels on campuses throughout the U.S. and was most notably denied entry to the Conference of Presidents. This, despite representing more Jewish Americans than most of the Conference’s members put together. Progressive Jewish voices are being excluded from Jewish institutions and the result is visible for all to see: An increasingly rightward tilt in the politics of the American Jewish community.
It should therefore come as no surprise that only one mainstream Jewish leader, Rabbi Rick Jacobs sh”lita of the Union for Reform Judaism, who is affiliated with J Street, had the gumption to call Netanyahu out and to take a stand in defense of the peace process.
“The final hours of the campaign – including the Prime Minister’s renunciation of his commitment to a two-state solution as well as his naked appeal to his hard-right bases’ fears rather than their hopes – were disheartening,” Jacobs wrote in a press release. “Israel deserves better, especially from a Prime Minister who holds himself out as the leader of entire Jewish people.”
“Our Movement is, and remains, committed to democracy, to peace, and to pluralism. We will reach out to the new government, partnering where possible, challenging where necessary.”
If only our other American Jewish leaders showed such resolve.
When asked whether it would change its policy to hew to that of the Netanyahu administration or pressure Netanyahu to change course, the JCPA’s Steve Gutow said, “I have no indication that the JCPA will change its policy [of supporting two states].” However he noted that the JCPA “isn’t a dictatorship” and that any policy changes “will be debated” and come as the result of a vote among members.
Should Israel adopt a one-state policy, which Gutow repeatedly asserted was highly improbable, a vote would be held, but, “I find it unlikely that we’d support that position.” Gutow, for his part, was hopeful Netanyahu would soften his stance, saying, “People do change. I think we need to wait to see what happens.”
I respect Gutow’s desire to avoid the tendency of other Jewish umbrella organizations to make bold pronouncements on behalf of their agencies’ member organizations without first consulting them. But I was left wanting by his inability to say without reservation that the JCPA is committed to the two-state solution and will not countenance efforts by the government of Israel to deviate from that position.
And that there’s the rub of it. When even ostensibly liberal Jewish organizations with inarguably progressive domestic legislative agendas can’t say that they’re appalled by Netanyahu’s behavior without fear of reprisal, what identity do we have left as an American Jewish community and what ability do we have to form any of our own opinions about how the Jewish state acts in our name?
Worse yet, it’s not just the Jewish community moving on this issue that we need to be worried about. The GOP is already going out of its way to out-Jew the Jews in their commitment to Israel by scuttling Iranian nuclear negotiations. So why not jump on board the one-state bandwagon as well? As Michael Tomasky writes in the Daily Beast:

“Though we won’t see this happen immediately or sensationally, it seems clear that, month by month and inch by gruesome inch, a Netanyahu win will move the Republican Party further to the right, to an unofficial (and who knows, maybe official) embrace of Netanyahu’s pivotal and tragic new position of opposition to a two-state solution.”

When Tom Cotton can take $700,000 from William Kristol and his hedge fund friends to undermine a President elected by 68% of American Jewry, what’s to stop all of Congress from rolling over for the biggest extremists with the fattest wallets?
Our community’s leaders already have. 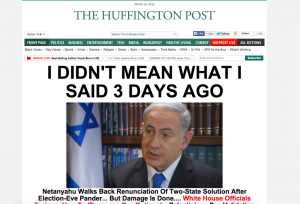 [UPDATE] The Rabbinical Assembly, the international association of Conservative rabbis, has come forward to denounce Netanyahu’s comments about Arab voters and has been inconceivably taken to task for it by the ADL! Apparently when you fearmonger about “the negro vote” the ADL considers it bigotry, but when you do the same to Arabs its “election overzealousness.” Abe Foxman has sunken so low that they’ll need an excavator to ready him for his retirement party. As the RA noted in a brief Twitter spat with the Republican Jewish Coalition(!!!), “if a Prime Minister from another democratic country made the same remarks regarding Jews, the ADL would be first to the ramparts.”
Meanwhile, Netanyahu has begun backtracking on his remarks about two states, a move welcomed as if it were believable by AIPAC, the ADL, and the JCPA. His conditions for Palestinian statehood, though, demonstrate no discernible change from his comments during his campaign that “anyone who moves to establish a Palestinian state and evacuate territory gives territory away to radical Islamist attacks against Israel.”
“Every territory that is vacated today in the Middle East is taken up by Islamic forces,” he told MSNBC’s Andrea Mitchell Thursday. “We want that to change so that we can realize a vision of real sustained peace. I don’t want the one-state solution. I want a sustainable two-state solution. But for that to happen, circumstances have to change.”
Netanyahu also said that a Palestinian state would “become a terror state,” and that “if you want to get peace, you gotta get the Palestinian leadership to abandon their pact with Hamas.” Any Palestinian state must also be demilitarized, he said.
Imagine that, in order to gain independence in 1948, Jews had to wait until there was no violent conflict anywhere in the Middle East before they could be trusted to have a state. Imagine that, because of the Irgun’s terror campaigns, the Jewish people’s right to self-determination was indefinitely suspended until they disarm unilaterally. That’s what Netanyahu is proposing as the conditions for a two-state solution. And if that’s supporting the two-state solution in your book, you’re as fundamentally dishonest as he is.

5 thoughts on “The Day that Two States Died”