Two years ago, in these very pages, I told you this would happen. I said Israel was moving towards an apartheid, one-state reality and that the American Jewish community was going to go along for the ride. My predictions were haughtily dismissed by a spokesman for the American Jewish Committee and deemed “highly improbable” by then-JCPA executive director Steve Gutow. Since then, the GOP has removed support for the two-state solution from its platform, AIPAC disappeared the two-state solution from its website’s talking points, and now the cherry on top: The President of the United States has announced he will not hold Israel to the two-state solution.
For the last decade, all-out war has been declared on anti-occupation Jews in the U.S. by the organized Jewish establishment. Everyone from J Street leftwards has been shunted aside — quite forcibly pushed out of the Jewish communal tent for violating the so-called “communal consensus” on Israel. Restrictions were put in place at Federations and Jewish Communal Funds, progressive Israel groups had events canceled for fear of reprisals, Jewish Voice for Peace was listed as an antisemitic organization by the Simon Wiesenthal Center — all of this to silence Jews who did not adhere to policy prescriptions handed down from on high in Jerusalem and dictated to American Jewry by the organs of Jewish communal life.
Largely, this ostracizing has focused on Jewish supporters of BDS, purportedly because BDS supports a one-state solution to the conflict (though it doesn’t explicitly) and therefore ultimately the dissolution of Israel. However, for years there has been a double standard in play, where Jewish supporters of one state in which Arab citizens have limited human and civil rights do not have their loyalty to Israel nor the Jewish community thrown into doubt, but rather are treated as legitimate voices in our discourse.
Hence, this meme I made five years ago calling the Jewish establishment out for its hypocrisy: 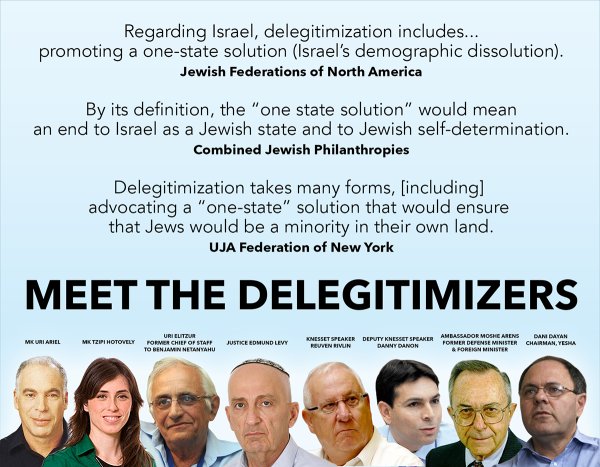 If a one-state solution delegitimizes Israel, certainly members of Israel’s ruling party who have called for such should be regarded as outside the communal consensus. But that’s not what’s happened. Since that time, nearly everyone in that image is now a senior member of the Israeli government who has been feted by the American Jewish establishment and has since moved their vision of one state from the fringes into the mainstream.
And it’s our fault. The American Jewish community, which sat on its hands for years while Israel shifted to the extreme right, facilitated the end of the two-state solution. By refusing to push back and instead deferring to the Israelis, “no matter who is in power,” the institutions of U.S. Jewish life have brought us here to this moment.
And so, now we will have one state. And make no mistake, it will be an apartheid state — because for Palestinians in the occupied territories, it already is. This means that we as a progressive Jewish community are now faced with a choice: We can continue to dissemble and make excuses for Israel, we can deny to ourselves that this is really happening and that the peace process has reached the end of the road, or we can accept that this is where we’re at and that our struggle must now shift from trying to save a two-state solution that will never be to fighting for the rights and equality of Palestinians as full citizens in a binational Israeli-Palestinian state. Because there’s going to be one state whether you like it or not — and that state can either be one that is equal or one that is not.

As my long-time readers know, I identified as a liberal Zionist up until only a few years ago. And I gave it up, not because I wanted to, but because I came to accept that the two-state vision is dead and that those who supported it were no longer welcome participants in Jewish life. Anyone who persists to believe otherwise is deluding themselves. Just ask our Ambassador to Israel Designate, David Friedman, who says Jews who support two states are “worse than kapos.”
It’s time to put up or shut up. Are you for humanity or are you for an exclusively-Jewish ethnostate, the kind of which inspires the likes of Richard Spencer?
Me? I’m putting up for human rights for all, not just my own people. I hope you’ll join me.

The One State Reality: A Timeline