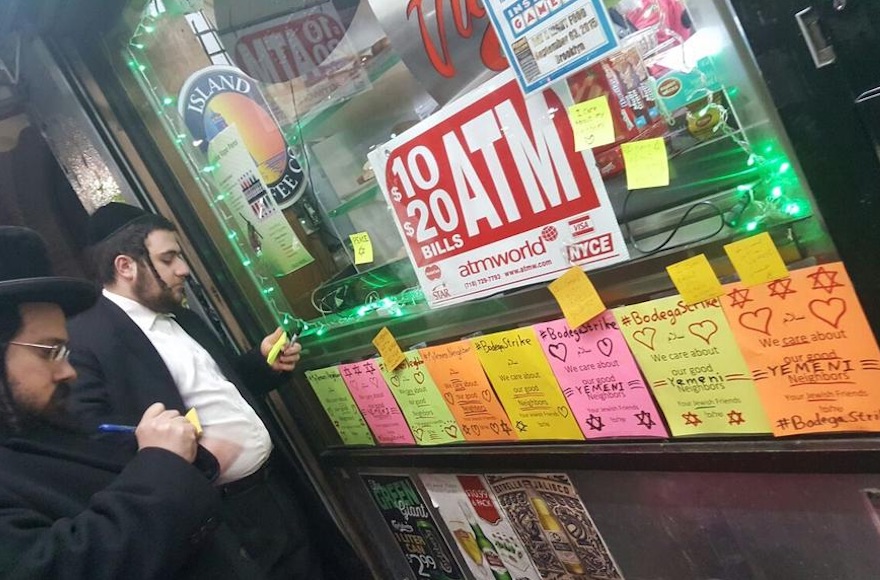 Last week Alexander Rapaport, a Borough Park Hasid, made headlines taking a stand with Yemenite bodega owners against the immigration ban on seven Muslim countries. Then, in the last day or two, the JTA reported that his Masbia soup kitchen lost donors over his outspokenness. Now it seems it may have been a net gain after all. I reached out to Rapaport to learn more:
“We were a group of friends, a group of Hasidim and this was all very premeditated. We are pro-religious freedom, pro-immigrant rights and we wanted to express solidarity,” says Rapaport, who describes himself as, “always for the underdog.”
[pullquote] The truth is religious freedom is not something to take lightly. As soon as you undermine that there’s no security for anyone.[/pullquote] The group were searching for the right opportunity when they learned of the Yemenite bodega owners’ strike and decided to do a post-it campaign on the windows of a local Borough Park bodega.
“Sometimes people who are anti-Zionist express solidarity with Arabs for that reason. We wanted to make sure it didn’t come across that way; the message should be very clear and simple and be understood and not be confused with anything else.”
The bodega is open 24/7 in the predominantly Hasidic neighborhood. Rapaport says people from the community came to him with stories of ways in which the owners of the bodega had helped them over the years: Calling a plumber and fronting money when a basement flooded on Shabbos, keeping an eye on a drop-out teenager. So far so good.
Masbia has three soup kitchen locations in NYC, two in Brooklyn and one in Queens. They are kosher, but open to everyone. Rapaport describes the clientele as, “an entire mosaic of New York City.” “We operate out of a storefront and intentionally so. It’s not in the basement of some program, or of a synagogue, or a church. We don’t want to fix you; we want to share a meal with you unconditionally, no questions asked.”
The volunteers too come from all walks of life, while most of the donors are Jewish. At the time of the bodega strike Rapaport was in the process of raising money for a new Queens facility.
“I did some personalized direct mail to my top donors and included my personal cellphone. A few days later someone sent a text, saying I was against Trump and therefore this person couldn’t support me anymore. Whatever you do, you win some people and lose others. But I thought this was uncalled for. To penalize the poor because of a nice gesture to some neighbors?”


Though Rapaport says he has gotten some hate mail, he also says the reports of a mass donor exodus from Masbia are overblown. “We lost a few donors when we shouldn’t have lost even one over this. But because of the publicity we’ve gained probably 100 for every one we lost.”
“The truth is religious freedom is not something to take lightly. As soon as you undermine that there’s no security for anyone.”