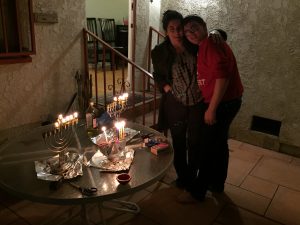 On the fifth night of Chanukah, my partner and I came back home to our own courtyard to light with our son.  Our family has taken to lighting our Chanukiyot in the small courtyard at the front of our house as our interpretation of “pirsumei nisa” (publicizing the miracle).  As the light grew, and the sounds of the blessings wafted up Shenandoah Street, I felt the privilege of being able to let this statement of faith and culture make its way out of the courtyard in Los Angeles and into the public sphere.  I thought about so many of my Muslim friends who were also standing proudly in the public space – with patience, compassion and determination – even through fear.  And it reaffirmed for me the need for us to stand together against the hate which is all too real and coming from many directions.  I will contintue to sing Ma’oz Tsur into the night and stand with my friends as they recite “Allahu Akbar” and “Asalam Aleikum” in a courtyard at the JACCC (in Griffith Park or at Venice beach).  And together we make a thriving pluralistic civic life here in Los Angeles.
As we stand in front of our blazing Chanukiyot this last night of Chanukah, let us recognize in them the growing fire of radicalism of all kinds.  Let us be aware that there are real fears – both from radical Islam and from the xenophobic responses Trump has emboldened in the courtyards of America.  But let us also feel the light created when we come together to “repel evil with something better” (Quran 41:34). Let us be vigilant in learning about one another and learning to love one another, for in the words of the Chanukah song, “In our hands are light and fire. Each holds a small light but all together the light is strong.”  It’s in our hands now, let’s burn bright.

Plant trees this year in an environmentally sustainable way

The Lying Bastards at TruthTellers.org