On Wednesday, September 7, The Brooklyn Commons, a nonprofit coworking space for progressive organizations including Families United for Racial and Economic Equality (FUREE), Jacobin Magazine, The Indypendent newspaper, and WBAI Radio, will be hosting a talk in its public café by antisemite and 9/11 truther Christopher Bollyn. The description of the event on the Commons’ website itself invokes the spectre of a shadowy Jewish elite secretly orchestrating world affairs, stating that “9/11 and the War on Terror are dual deceptions imposed on our nation by the Israeli/Zionist and Neo-Conservative cabal that controls our government and media.” 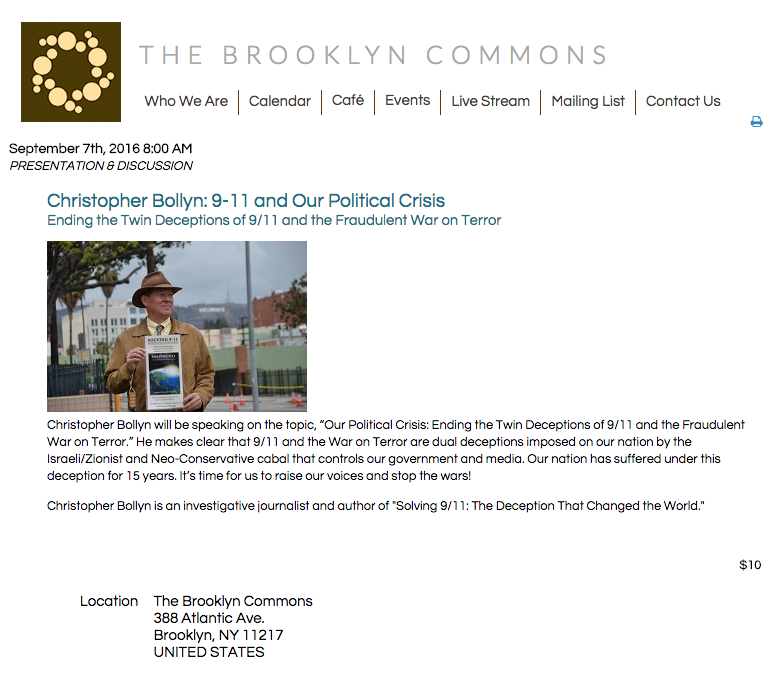 The original event posting on the Brooklyn Commons website.
When reproached on social media, a representative of the Commons stated that he did not infer anything antisemitic from Bollyn’s website — let alone their own event’s description. 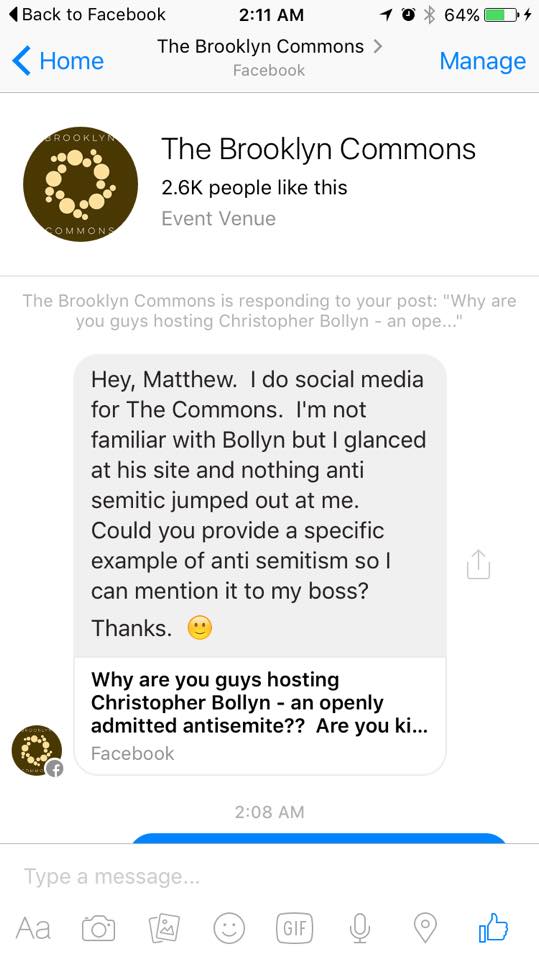 Yet a quick review of Bollyn’s site reveals countless examples of antisemitic conspiracy theories alleging a “Zionist Jewish” plot to induce America into the War on Terror so that their “cabal” can expand its global power. Here are just a few: 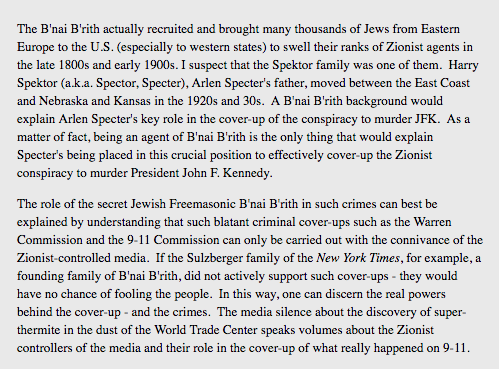 Bollyn also makes numerous references to the antisemitic forgery The Protocols of the Elders of Zion.

@jacremes @BrooklynCommons A good simple starting point is to just google someone name and elders+zion pic.twitter.com/cinseYadqm

Bollyn, who is a former contributor to the white nationalist American Free Press, has also been linked to Holocaust deniers by the Anti-Defamation League and has appeared on David Duke’s radio program. He has been called “a raging anti-Semite” by the Southern Poverty Law Center.
In addition to the Commons’ website, the event is also being promoted in the café itself with a poster claiming 9/11 to have been a Zionist “false flag” operation.

TFW you find a great new cafe… and then realize it's a den of antisemitic conspiracy nuts pic.twitter.com/btD0lPnOFS

The Commons did not respond to numerous attempts at contact on social media by this author.
Sadly, the booking of Bollyn and the failure of the Commons to be responsive to complaints about his antisemitism reflect the ongoing failure of the Left to recognize and acknowledge the seriousness of antisemitism within its own ranks. This further concretizes the impression that when it comes to the vilification of minorities, an exception will always be made in the case of Jews. As long as one wraps their antisemitic motifs in a veil of anti-Zionism, even the most blatant bigotry is fair game.
[UPDATE 9/3, Evening] Bollyn will also be speaking at another highly-regarded progressive space, Busboys and Poets Café, in Washington, D.C., the day before his Brooklyn Commons appearance. Details here.
[UPDATE 9/4, Morning] Busboys and Poets has canceled Bollyn’s talk. Still no word from Brooklyn Commons, which has now caught the attention of NYC Councilmember Brad Lander.

@selfagency This event was privately booked, not a sponsored event. After looking into it, quickly realized it doesn't support our mission.

[UPDATE 9/4, Evening] The Brooklyn Insitute for Social Research, a resident of the Brooklyn Commons, issued a statement condemning the event, cosigned by Jacobin, The Indypendent, and the Marxist Education Project:

As organizations that work out of the Brooklyn Commons, we reject the antisemitic politics of Christopher Bollyn. We do not have any say in event booking and management at the Commons but agree that such politics should have no place in leftist spaces.

FUREE and the Theater of the Oppressed Laboratory later signed on as well.
Bhaskar Sunkara, the publisher of Jacobin, also independently expressed hope that the event would be canceled, as did WBAI hip-hop DJ Jay Smooth.

A statement about that bizarro Christopher Bollyn event that will hopefully still be pulled from Brooklyn Commons. https://t.co/MBHr86vQCW

I hope @BrooklynCommons will step up and reconsider this. https://t.co/7gPO2kuTij

[UPDATE 9/5, Morning] Bollyn’s canceled talk at Busboys and Poets has been moved to the National Press Club (h/t Rafael Shimunov). 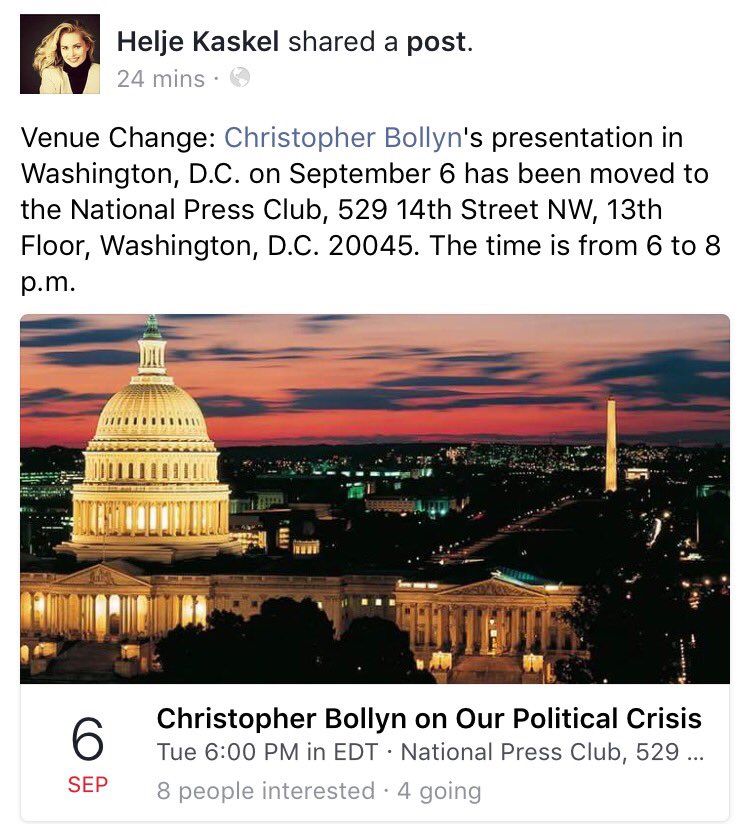 [UPDATE 9/5, Evening] Brooklyn Commons has removed the more incendiary antisemitic language from the Bollyn event listing but has not removed the event from their website.

It's fascinating and deeply disturbing that @BrooklynCommons removed the explicit anti-semitism from Bollyn's event page but kept the event. 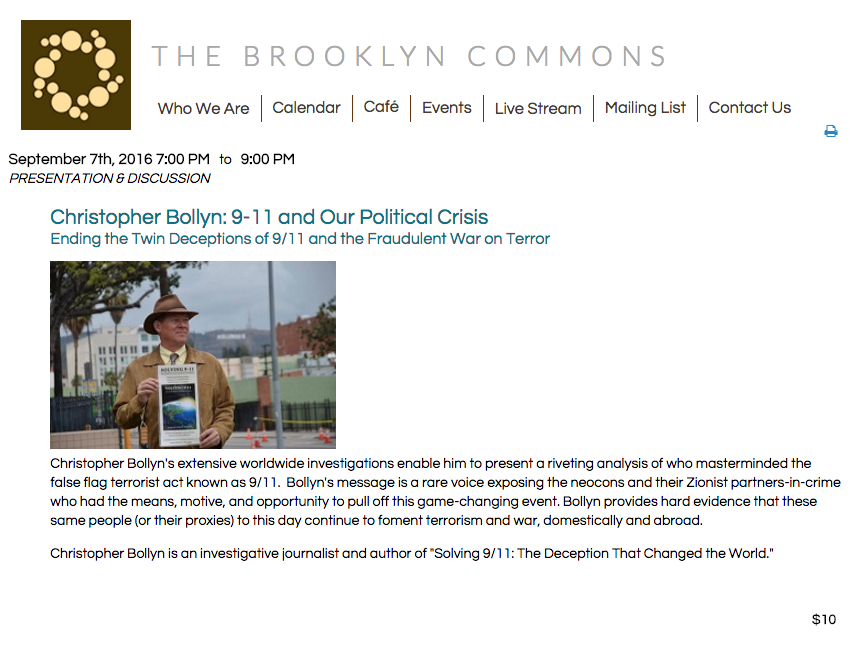 They have also, for some strange reason, begun responding to some complaints on Facebook with a link to the BISR statement, despite neither signing the statement nor canceling the event themselves. 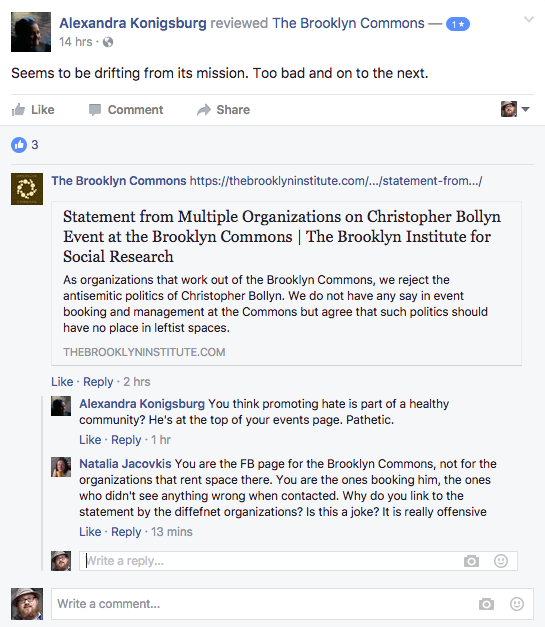 Meanwhile, the Unitarian Society of Hartford, which was to host Bollyn on Friday, has canceled his appearance. 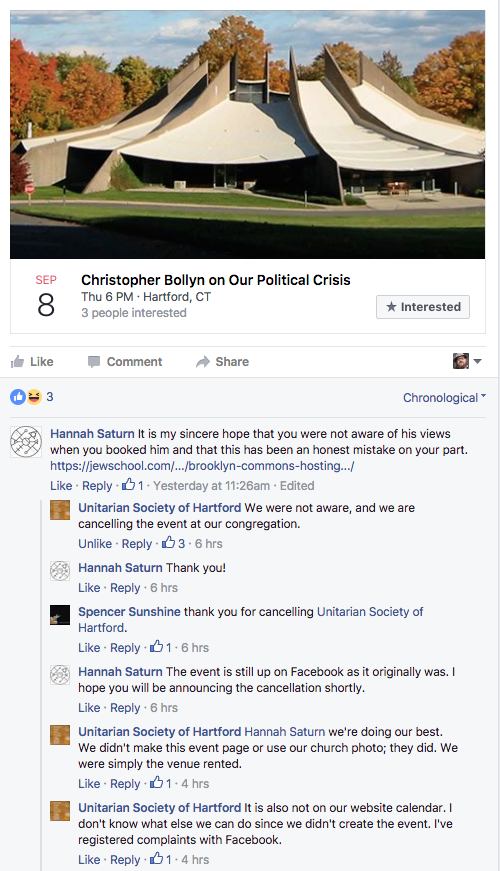 [UPDATE 9/6, Early Morning] It appears that Melissa Ennen, the owner of Brooklyn Commons, is herself a big-time 9/11 truther and a former organizer with NY 9/11 Truth. 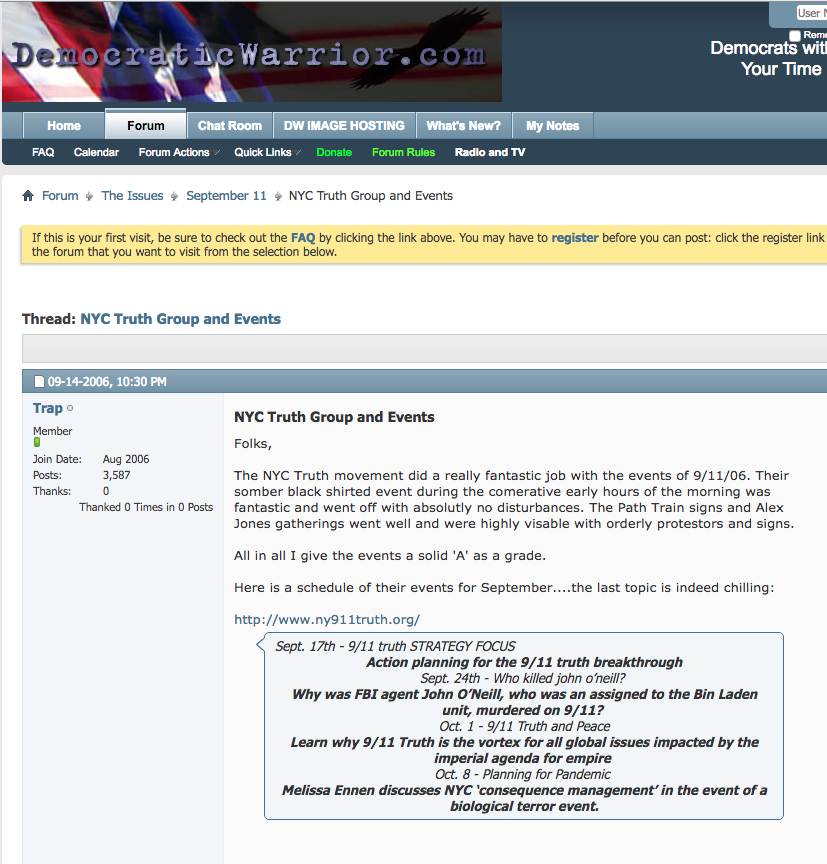 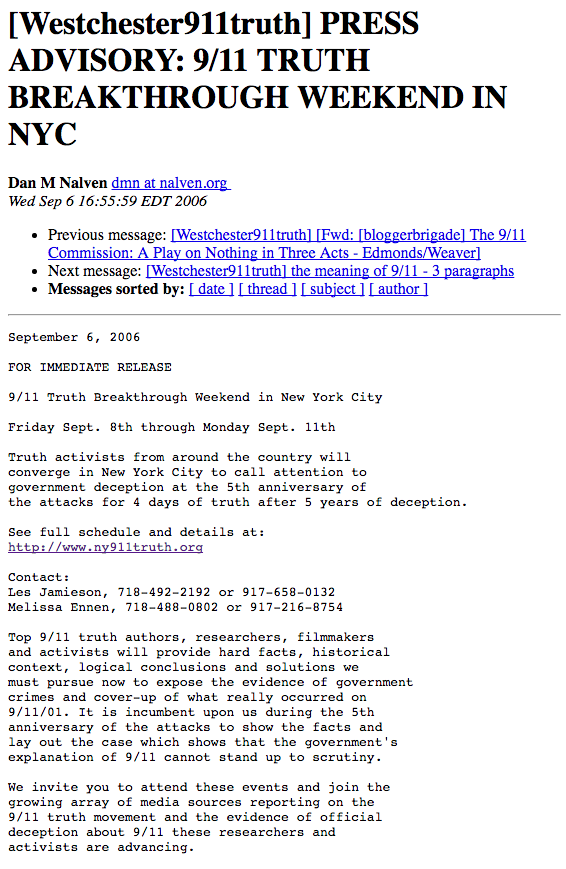 This would seem to explain, well, everything — the booking, the prolonged silence, the edited event posting. Everything. While it’s heartening to see many leftist voices, including the residents of the Commons, express their opposition to Bollyn and his brand of antisemitism, it’s nonetheless troubling that a person who subscribes to such unhinged beliefs, as Ennen appears to do, could rise to a place of prominence and influence in the New York progressive community. Doubt the official story of 9/11 all you like. Blame the “ZOG?” GTFO.
[UPDATE 9/6, Late Morning] Okay, now this is just getting silly. Our investigation has led to the discovery of Bollyn’s booking agent: A midtown Manhattan-based “shamanic palm reader,” Cathleen McGuire, who claims to have psychic abilities. Somehow she failed to forsee her bigoted client’s talks getting canceled.
McGuire also booked Holocaust denier Kevin Barrett, who has seemingly never encountered a terrorist act he didn’t believe Israel plotted, on a panel at this year’s Left Forum. 10 years ago, Barrett spoke at a NY 9/11 Truth event organized by Brooklyn Commons owner Melissa Ennen, which also featured ZOG-conspiracist Wayne Madsen, a contributor to the virulently antisemitic Veterans Today, as well as the king of all Internet conspiracy theorists himself, Alex Jones.
[UPDATE 9/6, Afteroon] West Park Church, which was to host Bollyn this Friday evening, has confirmed to us that his event has been canceled. The Village Voice, earlier today, also confirmed that the paper has removed the event listing from its website.

Meanwhile, more members of the Brooklyn Commons community are speaking out.

Have spoken numerous times 4 numerous reasons at @BrooklynCommons, v disturbed that they'll give space to anti-semitic fuckwad. Cancel it!

Any #leftist group having events at @BrooklynCommons must cancel and denounce its #antisemitism as it's unforgivable, find a diff place

Bollyn, for his part, has updated his website to note that his event in Hartford “may not happen,” claiming that threats were made against the Unitarian Society. 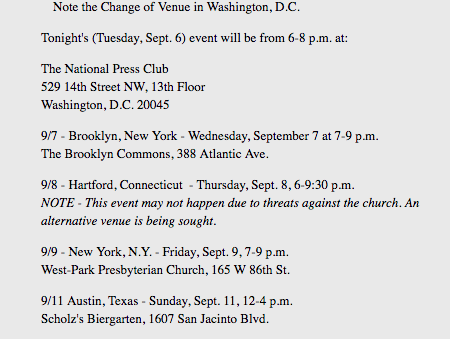 There is now only one venue left in the tri-state area giving Christopher Bollyn’s hateful conspiracies a platform: Brooklyn Commons.
[UPDATE, 9/6 Late Afternoon] Melissa Ennen has posted a statement to the Brooklyn Commons website arguing that she opposes censorship and did not set out to create a safe space for progressives. She also regards Bollyn’s antisemitism as just a “disparate” view in a “wide politcal spectrum.”

I did not research the speaker before accepting the rental. I do not have the time, resources or inclination to censor the hundreds of groups who rent the space. […] I agree that all forms of racism should have no place in leftist spaces, but in my opinion, to get to the root of racist thinking, confrontation works better than censorship. […] But I never intended for The Commons to be a safe space at all times. Nor was it designed to be a cozy cocoon for intramural debate among leftists. From the beginning my goal has been to foster discussion among disparate groups across a wide political spectrum.

Around the same time as Ennen’s statement went live, Jewish Voice for Peace and Jews for Racial and Economic Justice both released statements condemning the event and calling for its cancellation.

The @BrooklynCommons should cancel its event with antisemitic 9/11 conspiracy theorist Christopher Bollyn pic.twitter.com/LtOnBKdcsF

Every remaining stop on Bollyn’s tour is now canceled except for Brooklyn Commons.

How did @scholzgarten, the oldest business in TX react when hearing neo nazi Christopher Bollyn planned to use their venue? "Fuck that guy!"

Spencer Sunshine and Rafael Shimunov contributed to this report.
[UPDATE 9/7, Afternoon] The Baffler has relocated its upcoming event at Brooklyn Commons, while the Brooklyn Institue for Social Research is busy relocating all its upcoming events.

Planning to come to our #BKBF16 event next week? We’ve changed the location from Brooklyn Commons to A Public Space: https://t.co/4ryBOJsrhF

IfNotNow, which held a training at the Commons just last week, has also issued a statement condeming the Bollyn event and threatening to move its trainings if the talk goes on as planned.

Last weekend we held a large training at @BrooklynCommons. Tonight they are hosting an anti-Semite. Our open letter: https://t.co/zHpQnXWhxa

Earlier today the Commons removed the “Who We Are” page from its website where it stated its progressive mission and listed its member organizations, seemingly indicating that it no longer has a progressive mission or its members do not want to be a shield for Melissa Ennen’s bad politics. They have also removed the review functionality from their Facebook page, disappearing dozens of angry complaints in the process.

A protest is now planned outside the venue during Bollyn’s talk this evening.

Bollyn, meanwhile, has alleged that his tour cancelations are the result of a Zionist plot to stifle his freedom of speech, writing on his website:

The event was bumped up to the National Press Club after the planned venue, Busboys and Poets, received threats from Zionists who use gangster tactics to stifle discussion of Israel’s role in the false-flag terrorism of 9/11. Americans need to stand up to Zionist assaults against our freedoms of speech and assembly.

What I Learned at the General Assembly