Four hundred Jews, Muslims, and others attended a public Passover “Seder in the Streets” on the steps of New York City Hall, calling for an end to “broken windows” policing and the passage of the Right To Know Act. Speakers included Muslim American leader Linda Sarsour, Jews of Color leadership, and political figures. Six Jewish community leaders were arrested. 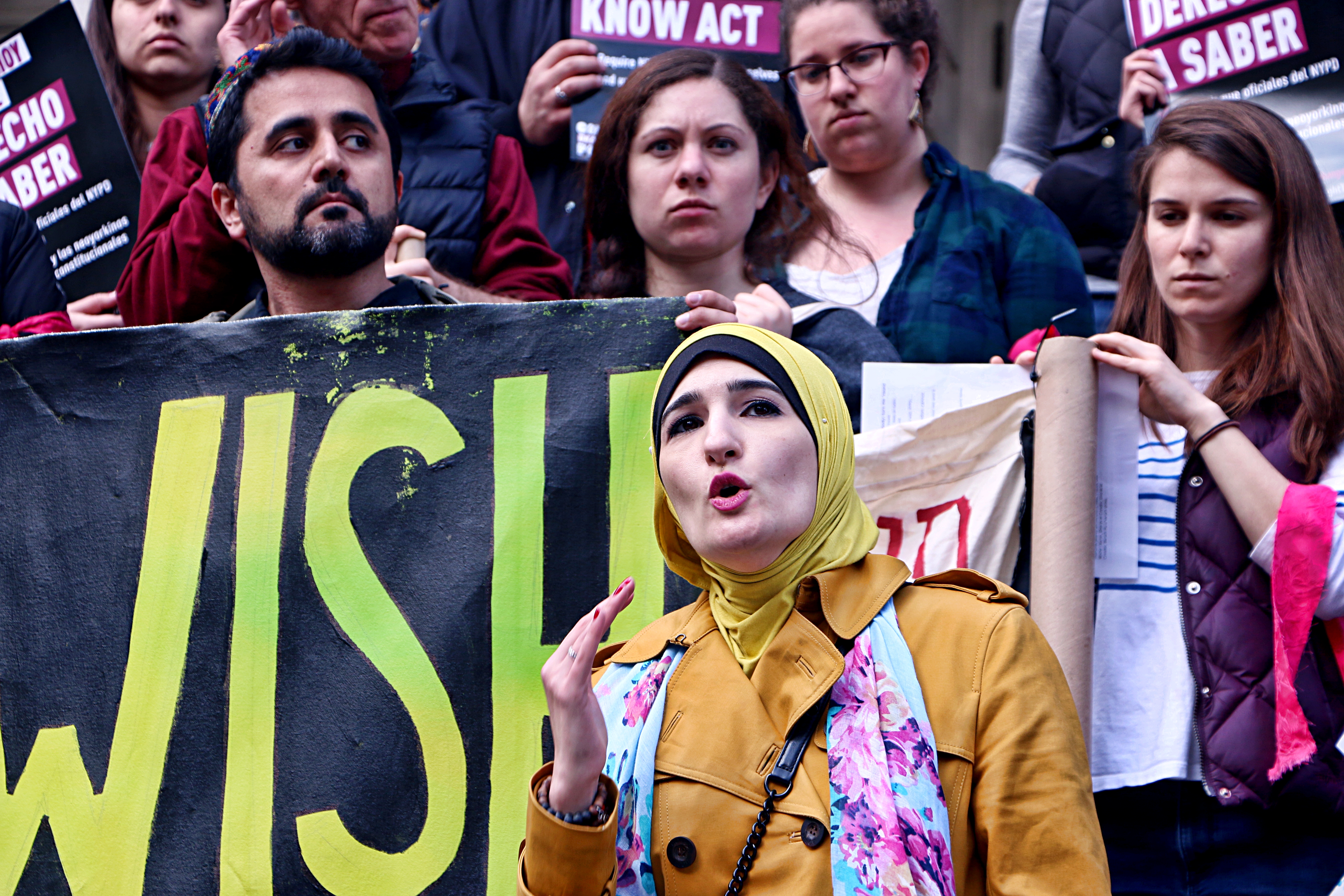 “I am a first generation American of Iranian Jewish parents, and my parents felt blessed for the second chance they were given when they came to America as refugees and for the opportunities this country would extend to me and my siblings. All immigrants, documented or undocumented, and all people deserve that same chance, to feel like the place that they live is their sanctuary.” — JFREJ Mizrahi Caucus member leader, arrestee and Jew of Color Talia Kamran

“My own immediate family are people of color who immigrated to the U.S. from Colombia, and most of my family still lives there, so I feel a responsibility toward our immigrant neighbors who are vulnerable to being targeted by ICE raids and racist executive orders. It’s imperative in this volatile political moment that we protect our neighbors, our families, and ourselves from xenophobic violence.” — JFREJ Jews of Color Caucus leader and arrestee Julia Carmel

JREFJ issued a statement saying, “De Blasio continues to avoid the fact that by continuing to support “broken windows” policing, which targets communities of color and thus immigrant communities, he places New Yorkers at risk of ICE enforcement, particularly under the Trump administration’s expansive targeting. An NYPD legal officer has even issued a misleading statement about turnstile jumping, as de Blasio and the NYPD attempt to obscure the fact that their discriminatory enforcement actions contribute to ICE detentions and deportations.”

“My dad was an immigrant, so ‘My father was a wandering Aramaean’ has always felt as immediate and personal as the Passover story is supposed to. New York is the place where my past and immediate ancestors ceased to wander, and made a home — an option that should be available to all all New Yorkers. Right now too many New Yorkers are neither free nor safe in their own neighborhoods, workplaces, and places of worship and therefore my own Jewish liberation is incomplete.” — JFREJ board member and Jew of Color Dania Rajendra

“My family is originally from Aleppo, which is now devastated from the war. They lived in harmony with other Arab people — Christians, Muslims, and Jews. [..] And as an Arab Jew myself, I believe that an insult on Arabs is an insult to us all. If history has taught us anything, it’s that we can, should, and have been there for each other. This time is no different.” — Rabbi Jose Rolando Matalon, Senior Rabbi, Congregation B’nai Jeshurun

“Passover is not only a time to remember our journey as Jews from captivity to freedom, but also a time be reminded of our obligation to make sure we all get free, we all find sanctuary. Today, we don’t get to be given a ‘promised land’ as a sanctuary space the way the Israelites were. Today we must use our people power to be the light and build the sanctuary of safety and inclusion for the marginalized and discriminated citizens of the world.”  — JFREJ Jews of Color Caucus leader Yehudah Webster

“When my parents fled Uzbekistan as Mizrahi Jews, they did so with me as a child in their arms. Our ability to do so wasn’t granted by the existence of the Statue of Liberty, but by activist Jews who applied our traditions and the inspiration of liberty to fight for it. Today we as a city, and I as a New Yorker like to say we are a Sanctuary City, but the fact that it’s unsafe for many of my friends to stand here like I am, proves that it’s a sanctuary only to some. So I am here in the Jewish tradition of those who marched, sat, prayed, and disrupted for me as a child, and I promise to march, sit, pray and disrupt for my friends and their children.” — JFREJ Board member and arrestee Rafael Shimunov

“If Mayor de Blasio is serious about the safety of all New Yorkers and serious about standing up to Trump, he must end Broken Windows and support the full Right To Know Act. As a Jew, I cannot imagine a more powerful way of re-telling our peoples’ struggle for liberation than facing arrest in the name of helping my neighbors resist the Trump/de Blasio threat of racist policing and state violence.” — Leo Ferguson, JFREJ Staff Organizer and Jew of Color