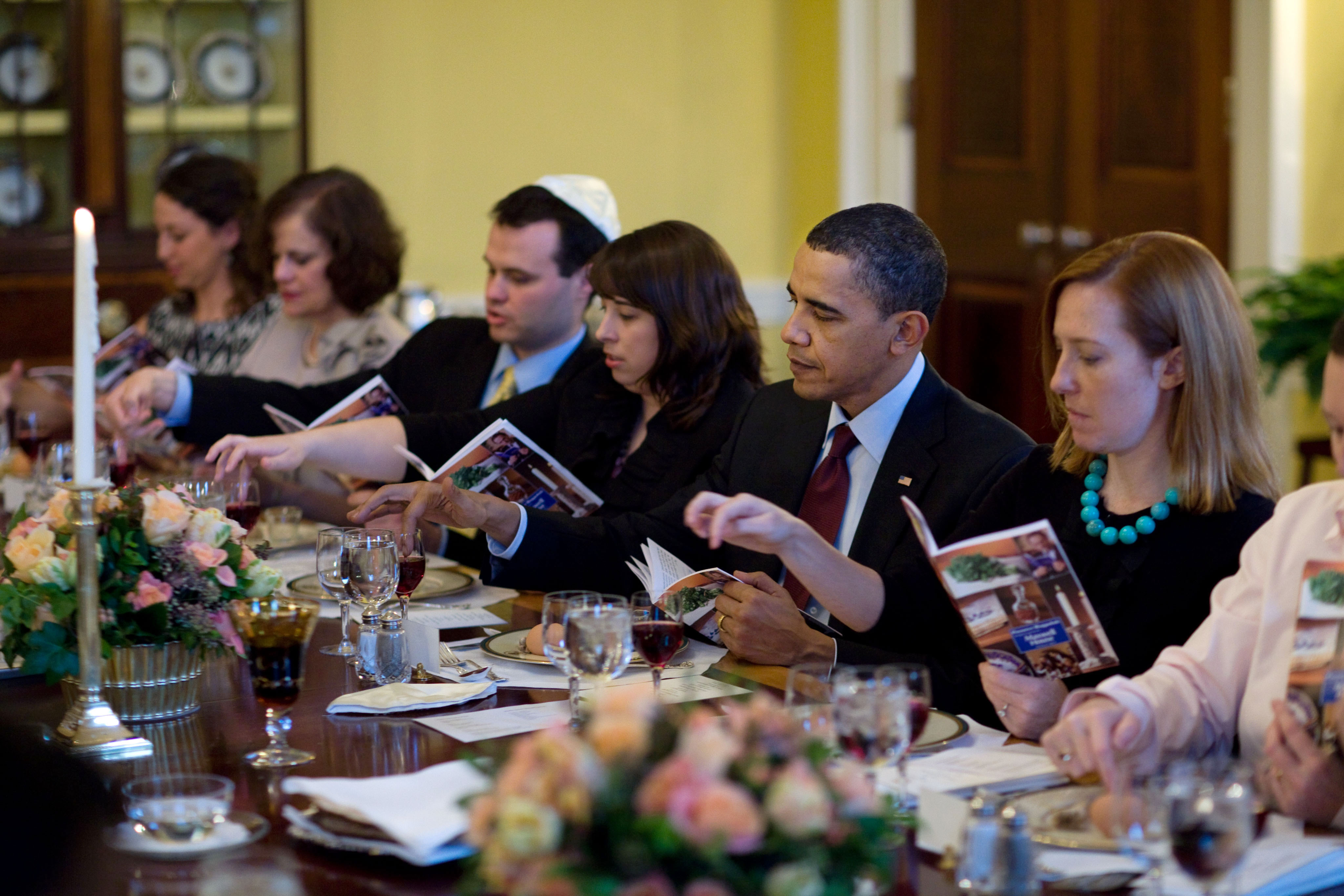 In Reply to Shmuel Rosner: (How) Should We Talk About Politics at Seders?

A close friend of mine, when he was a young labor lawyer in New York City, once represented striking workers at a Brooklyn factory. The owners, who were frum Jews, had bribed the union leadership, and the workers, who were desperately poor, revolted and initiated what is called a “wildcat strike,” that is, a strike in defiance of the union leadership. The legal battles, as you can imagine, were heated, high-stakes, and contentious. Now, it happened that a particularly nasty court appearance took place on the morning before the first Seder. As my friend was leaving the courtroom, one of the frum owners, in a conciliatory gesture, wished him a “zissen pesach,” a sweet Passover. My friend replied, “When you’re at your seder tonight, just remember that you are Pharoah.”
My friend told this story with some embarrassment. Years later, he now views his tokhekhah, his rebuke, as both imprudent—he might have inadvertently hurt his clients!—and also not menschlikh, not kind. But I think about his dilemma often around Pesach time, particularly this year. There have been a spate of recent pieces suggesting we ought to detach our politics from Pesach, most recently Shmuel Rosner’s long op-ed in the New York Times which claims that “political” Haggadot “take a historically unifying celebration of a people and turn it into a politically divisive event.” Below, I hope to show that Rosner’s understanding of the Exodus—which prioritizes national solidarity above all else and divides cleanly the “transcendent, the mysterious, the eternal” from “worn-out political debates”—is badly mistaken. But he definitely raises questions we all worry about.
The Going out of Egypt contains deep, powerful, and controversial claims about justice, oppression, and liberation. Sharing sacred space with friends, family, and community, we are forced to ask ourselves: Do we bring up those ideas, if doing so will divide the people at the table and hurt feelings? If we treat Pesach as a sweet, collective celebration and “don’t make waves,” do we risk losing Torah’s powerful moral critiques? How do we balance the holiday’s sometimes divisive values with the value of being together?
The prophet Ezekiel, like my friend, prioritized critique over community. In chapter 20, Ezekiel is asked by Israelite elders to ascertain God’s will. When God’s word comes to him, he first retells the Exodus: God chose the children of Israel, lifted them from Egyptian bondage, and promised them the land of Canaan, with the condition (this is God speaking):

וָאֹמַר אֲלֵהֶם, אִישׁ שִׁקּוּצֵי עֵינָיו הַשְׁלִיכוּ, וּבְגִלּוּלֵי מִצְרַיִם, אַל-תִּטַּמָּאוּ:  אֲנִי, ה׳ אֱ–לֹקיכֶם.
And I said to them: Let every person throw away the detestable things of their eyes, and defile not yourselves with the idols of Egypt; I am God.

Unfortunately, Israel does not reform itself. Thus, much of the chapter then recounts a back-and-forth in which Israel commits idolatrous sins and profanes God’s shabbat (in my friend’s terms, massive labor-law violations), and God punishes them variously, including by exiling and dispersing them among the nations. In the chapter’s last section, God promises to “bring out” Israel once again, essentially repeating the Exodus, and return them to Canaan, so that “you shall know that I am God, when I shall bring you into the land of Israel” (וִידַעְתֶּם כִּי-אֲנִי ה׳, בַּהֲבִיאִי אֶתְכֶם אֶל-אַדְמַת יִשְׂרָאֵל). But crucially, this second Exodus is nastier than the first. God tells the people:

וּבָרוֹתִי מִכֶּם, הַמֹּרְדִים וְהַפּוֹשְׁעִים בִּי–מֵאֶרֶץ מְגוּרֵיהֶם אוֹצִיא אוֹתָם, וְאֶל-אַדְמַת יִשְׂרָאֵל לֹא יָבוֹא; וִידַעְתֶּם, כִּי-אֲנִי ה׳.
And I will purge out from among you the rebels, and those that transgress against Me; I will bring them forth out of the land where they sojourn, but they shall not enter into the land of Israel; and you shall know that I am God.

Pay close attention: the “strong hand and outstretched arm” here are being used by God against the Jewish people, or at least that portion of it which has violated God’s law. We are used to the Psalms inviting God, “pour out your wrath against the nations who don’t know you”: Ezekiel, disturbingly, warns us God may pour out divine wrath on us; as in my friend’s story, Ezekiel is comparing bad Israelites to Egyptians. The covenant here is not an eternal guarantee or familial relationship that extends to all Jews. Ezekiel, for what it’s worth, completely falsifies Rosner’s theory of what the Exodus is about. “A historically unifying celebration of a people”? Someone ought to have told Ezekiel, who sees the Exodus rather as a crucible through which our commitment to controversial but central Jewish values can be tested. If you flagrantly violate the values of the holiday, Ezekiel won’t wish you a “zissen Pesach.”
This chapter of Ezekiel makes no direct appearance in the Haggadah, though I am sure many of us have sat through Seder conversations with people who sound like the angry prophet (some of us have indeed sounded like him ourselves). But it does lie behind an odd moment that we often gloss over. By quietly alluding to Ezekiel, the Haggadah at once honors and subtly alters his message of harsh critique.
Shortly before the recitation of the ten plagues, during the extended midrash on Deuteronomy 26 that frames the broader maggid section of the Haggadah, we read:

This is all very odd. First, who ever heard of a sword as a plague visited on Egypt? Second, the proof-text for the sword is from Chronicles 1:21, where God has sent a sword to destroy Jerusalem; why is a prooftext about violence threatened against Israel being invoked to discuss plagues against Egypt?!
Now, as it happens, the plague and the sword do show up as plagues in Exodus—just not targeted at Egypt. Back in Exodus 5:3, Moses and Aaron ask Pharaoh for a holiday in the wilderness:

As Rabbi Menachem Kasher notes, Exodus 5:3 is plainly the source for the pairing of sword and plague. But here too, the threatened violence is against Israelites, not Egyptians. Rashi, following a midrash in Shemot Rabbah, suggest that Moses and Aaron are really threatening Pharaoh and are just speaking euphemistically; but that’s because Rashi and Shemot Rabbah already have the Haggadah, in which these are plagues against Egypt, and they are rereading the Haggadah back into Exodus. In fact, Exodus 5:3 sharpens the question: Why does the Haggadah connect “a strong hand and an outstretched arm” to a verse in which God threatens plagues against Israel?
The answer, which I found in the Schechter Haggadah, is that the phrase “a strong hand and an outstretched arm” here isn’t a quotation about the Exodus at all: it is taken from Ezekiel 20, where it is about God’s punishment of Israel. Here is the source of the midrash, in the Sifrei B’midbar 115:

חי אני נאם ה’ א-לקים אם לא ביד חזקה ובזרוע נטויה ובחמה שפוכה אמלוך עליכם. ביד חזקה דבר שנאמר (שמות ט) הנה יד ה’ הויה בזרוע נטויה זו חרב שנאמר (ד”ה א’ כ”א) וחרבו שלופה בידו נטויה על ירושלים, ובחמה שפוכה זה רעב אחר שאני מביא עליכם ג’ פורעניות הללו זו אחר זו ואחר כך אמלוך עליכם על כרחכם.
“As I live—declares the sovereign God—I will reign over you with a strong hand and an outstretched arm, and with poured out fury”—that’s Ezekiel 20:33! “With a strong hand,” this refers to the dever (pestilence) as it is said: “Behold, God’s hand will be upon your livestock in the field, upon the horses, the donkeys, the camels, the herds and the flocks, a very severe pestilence” (Exodus 9:3) “And with an outstretched arm,” this refers to the sword, as it is said: “His sword was drawn, in his hand, stretched out over Jerusalem” (1 Chronicles 21:16). “And with poured out fury”: this is famine. After I bring upon you these three vengeances one after the other, I will then rule over you against your will…

The Haggadah text is very technically subtle. By dropping the third term, “poured out fury,” it assimilates the midrash on Ezekiel into the flow of its midrash on Deuteronomy and makes it read like an account of the plagues against Egypt. And indeed, as we read through this bit every year, usually we don’t pay it much mind. Yep, yep, lots of divine violence against the foreign oppressors—it’s ten, now it’s fifty, maybe forty, maybe 250, and okay, fine, maybe there’s a sword in there too. Only if we pay close attention does the oddness of the text strike us, and only if we dig into that oddness do we encounter Ezekiel’s disturbing, harsh critique.
So the Haggadah hides Ezekiel’s painful, internal critique of Israel beneath the innocuous, familiar story of God triumphantly punishing our opponents. This esotericism, I want to close by suggesting, is a powerful tool for thinking about how to balance community and critique. Presented directly, voices like Ezekiel’s and (l’havdil) my friend’s alienate people and hurt feelings. But ignoring them empties the Exodus of its challenge to our actual lives. By hiding Ezekiel in plain sight, the Haggadah achieves two important goals. First, painful conversations about how we have ourselves become like our Egyptian oppressors may happen, but only if we are wise enough to locate that critique in the text, and only when we choose the right time to dig deeper. Tokhekhah, rebuke, is deeply personal and circumstantial, and it demands we be attentive to context and wise about when and how to intervene. While the Haggadah preserves an anchor for a difficult conversation, it doesn’t force one.
Second, and more subtly, by making us play an elaborate exegetical game to find Ezekiel’s rebuke, the Haggadah arouses our curiosity and playfulness. When you encounter the harsh, threatening voice, you are already safely enmeshed in a web of textual connections: Rashi, Shemot, Deuteronomy, Ezekiel, the Sifrei, and more. We love to learn, and we love to hop between the many branches of the tradition. The Haggadah, in its wisdom, knows that while we are playing, we are more receptive to critique and that, as we pull people closer into the texts, we can also push them a little without losing them.
In Psalm 119, David asks God, “דֶּרֶךְ-שֶׁקֶר, הָסֵר מִמֶּנִּי; וְתוֹרָתְךָ חָנֵּנִי,” which means something like, “Remove from me the way of falsehood; and grant me your law graciously.” I hope that, in plumbing the Haggadah’s interpretive depths, we encounter Torah as a graceful gift, and I hope that receiving this beautiful gift can gently ease us off the paths of falsehood.
(A version of this text was originally given as a d’var torah at my shul, Congregation Beth Israel, in Berkeley; thanks to the Rabbi and Maharat there for facilitating that, though of course below are my ideas, not the shul’s. Thanks also to Mark Gerson, with whom I learned this material and who influenced this reading significantly, though he may not agree with it.)