We’re facing a humanitarian and moral crisis right now because of our country’s immigration policies.

Don’t be fooled by the executive order that the president signed on Wednesday. The administration claims that the order ends the family separation policy, but it will in fact still separate families. And it makes no provisions for the 2,300 children who have been removed from their parents’ custody since May.

At best, this policy will result in parents and children being imprisoned together — and still denied the chance to apply for asylum. This policy is STILL inhumane and against international law.

This week’s parshah, Chukat, contains an interesting case study in treatment of human beings. The parsha records two deaths: that of Miriam, and that of her brother, Aaron. They are quite a study in contrasts.

Aaron’s death is witnessed and mourned. Miriam’s death is practically parenthetical in the journey through the desert. The word choice emphasizes the difference: Aaron poetically “perished” (גָוַ֖ע), while Miriam simply “died” (תָּ֤מָת). What happened after Miriam dies is that she is buried, while the people of Israel observe shloshim for her brother. Of course, these same people are indeed quite upset after Miriam’s death — but only because her well disappears upon her death, and with it, their source of water.

Torah is a sexist document, so this divergence is in some ways unsurprising. Through their actions, Israelites show that they value Aaron’s life more than Miriam’s. Aaron’s full humanity is acknowledged, while Miriam is reduced to her utilitarian value.

As we learn so often in Jewish text and tradition, how we treat people in death says much about how we treat them in life.

Ultimately, what we are witnessing right now is the dehumanization of immigrants. Literally and figuratively, human beings are being deliberately stripped of their value and their dignity.

A friend trenchantly captured this on Twitter, quoting Pharaoh alongside the president. 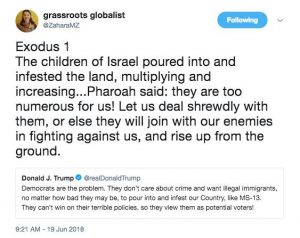 The president is drawing directly from the oldest tyrant in the book: “Our country” is Egypt; “immigrants” are the children of Israel; and the “Democrats” are the enemies.

But this comparison also points to the roles that Jews must play right now. Our lot is with the immigrants so denigrated by this administration.

What this means on a practical level is that we need to build relationships with immigrant-led organizations and to act in solidarity at their request. There are actions taking place across the country over the next few weeks. There are many national mobilizations planned, but it’s also important to take action at local detention centers, as adults and children detained at the border are being sent all over. Last night in New York City 300 Jews gathered at a rally sponsored by T’ruah and Jews for Racial and Economic Justice, and cosponsored by more than 30 other Jewish organizations, to call for a just a humane immigration policy.

Next week the three week of mourning begin, culminating in the holiday Tisha B’Av, in which we commemorate various tragedies that have befallen the Jewish people. T’ruah is encouraging communities to plan actions at ICE detention facilities then (July 21-22).

And following the call of the immigrant rights organization Mijente, T’ruah is organizing clergy (and clergy-to-be) to join a delegation to San Diego July 2-3. (Please contact me if you’re interested. If you’re not clergy, sign up to go with JFREJ.)

May we strive to ourselves recognize the humanity of each and every person — and to ensure that our immigration system does the same.

This piece of #TorahForTheResistance is written by Rabbi Salem Pearce. She is the Director of Organizing at T’ruah: The Rabbinic Call for Human Rights