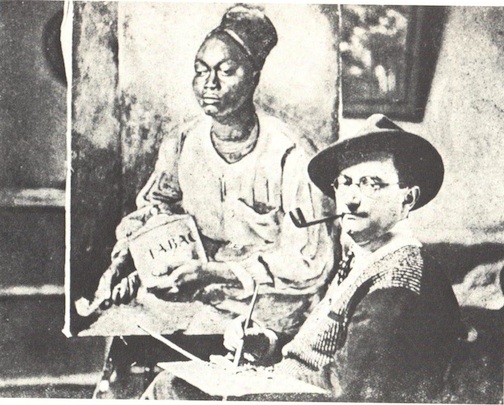 In November of 1940, Roman Kramsztyk (pictured above) found himself behind the ghetto walls. The Germans had invaded and Kramsztyk, a Polish-speaking Jew who spoke no Yiddish and read no Hebrew, suddenly found himself surrounded by the battered Jews of which he knew practically nothing. The son of two of Poland’s most wealthy Jewish families, Kramsztyk’s forced move into the ghetto symbolized, in dark tones, the estrangement of Jews living, by chance of their birth only, on the gilded periphery of Jewish and Polish life.
Up until that point, Kramsztyk, who had been baptized at birth, had become known as one of Poland’s most compelling painters and he considered himself a Pole. He was committed to melding the demands of modernist aesthetics with traditional masters. A member of the Polish Rytmists (Rhythmists), Kramsztyk’s paintings drew on Cezanne, orientalism and the Baroque. Jewish themes emerged in his work only around the time of his internment in the ghetto, when he became known for compiling artwork that would testify for victims there.
Here is an early portrait of Kramsztyk himself, sitting beside his painting in his Warsaw studio. The photograph’s symmetries, and the asymmetries for that matter, are striking.
Roman Kramsztyk was shot and killed in the Warsaw ghetto on August 6th, 1942 at the age of 57.