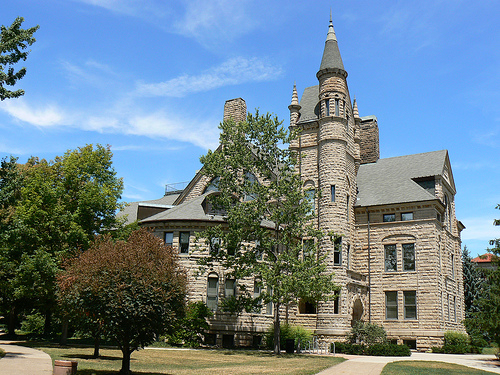 by Oberlin College students
[Editor’s Note: An earlier version of this post incorrectly attributed this post to students associated with Jewish Voice for Peace.]
As current Oberlin students and anti-Zionist Jews, we are writing to add our voices to the conversation about anti-Semitism and Professor Joy Karega. We see the the level and form of condemnation as unproductive, polarizing, and reinforcing oppressive anti-black and anti-BDS narratives on campus. We unequivocally oppose the responses by the college which suggest punitive measures and leave no room for collective accountability. We strongly believe that Professor Karega should not be fired nor removed from tenure consideration.
In recent days, a chorus of pro-Israel Jewish alumni, outside voices, and a few vocal students have monopolized Jewish opinion on this issue. These voices do not represent us. This campus should exist for its current students, and not for the political agendas of alumni and Zionist voices against BDS or Palestinian solidarity. Though there have been isolated instances of anti-Semitism, we do not feel that they indicate a systemic presence of anti-Semitism within the administration or the student body.
We recognize that the attacks on Professor Karega are not occurring in a vacuum. The original article from The Tower, a right-wing Zionist periodical, links Professor Karega’s Facebook posts to the anti-BDS letter from Oberlin alumni released in January 2016. This is a pattern we have seen before. Across the country, pro-Israel organizations and voices, intent on discrediting the BDS movement, are loudly and falsely insisting that college campuses are hotbeds of anti-Semitism and are unsafe spaces for Jewish students because of pro-Palestine activism. The false charges of anti-Semitism in the alumni letter and the media at large about BDS and anti-Zionism make it difficult to confront anti-Semitism when we experience it.
The official statements from the college reveal the double standard in its responses to instances of anti-Semitism versus anti-Blackness. It concerns us that administrators and faculty members who have vocalized their condemnation of anti-Semitism have remained relatively silent when incidents of racism, such as the defacement and death threats on the ABUSUA Demands or the March 4th, 2013 events, have merited serious response.
We are deeply troubled by the persistent conflation of anti-Zionism and anti-Semitism, which is not only ahistorical and unfounded, but also plays a central ideological role in the attempt to undermine legitimate criticism of the state of Israel. This conflation leaves us, as anti-Zionist Jews, without a community to turn to when we do experience anti-Semitism.

We agree with the definition of anti-Semitism laid out by Aurora Levins Morales, a Jewish pro-Palestinian activist; she writes that anti-Semitism, writing about European Jewry under Christianity, functions by creating “a vulnerable buffer group that can be bribed with some privileges into managing the exploitation of others, and then, when social pressure builds, be blamed and scapegoated, distracting those at the bottom from the crimes of those at the top.” In this way, singling out the Rothschilds as masterminds of global capitalism, as Karega did in her posts, has historically worked to blame and scapegoat Jews, while distracting attention from broader systems of capitalist exploitation and imperialism. We want to call in Professor Karega, whom we greatly admire as a professor and activist, and are confident that productive dialogue about collective liberation can occur without vitriolic attack or Zionist apologetics.

We believe that “Never again for anyone” means that anti-Jewish oppression must be fought alongside anti-Black racism, anti-Arab racism, Islamophobia, and other forms of oppression. In this spirit, we are troubled by the implicit and explicit currents of anti-Black racism prevalent in the mass defamation of Professor Karega. We urge all Jewish students concerned about anti-Semitism to fight with equal passion for Palestinian liberation, Black liberation, and an end to all forms of oppression, on and off campus.