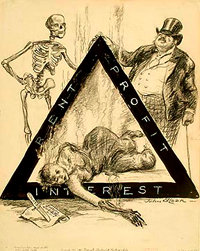 This is the one bit of labor history that many Jews have actually heard of. Unfortunately, in these debased days* few Jews, let alone the general population, really has much knowledge of Jewish labor history, and why the labor movement was so incredibly important – and why revitalizing it, and fighting the cynical pro-business interests of this administration and its appointees to the NLRB, is so essential for the future of workers in the USA today.
Think the conditions that sparked the success of the labor movement -and its necessity- are “the past?”

Even today, sweatshops have not disappeared in the United States. They keep attracting workers in desperate need of employment and illegal immigrants, who may be anxious to avoid involvement with governmental agencies. Recent studies conducted by the U.S. Department of Labor found that 67% of Los Angeles garment factories and 63% of New York garment factories violate minimum wage and overtime laws. Ninety-eight percent of Los Angeles garment factories have workplace health and safety problems serious enough to lead to severe injuries or death.

from here (…just because I’m lazy. If you want more statistics on this, they’re everywhere. Don’t like garment factories? Restaurants, mines, chain stores – like – Wal-Mart. If you like a good scandal, try meat packing plants and slaughterhouses – including kosher ones, to our shame. Ã®Ã¦Ã²Ã¦Ã²)

On March 25, 1911, 146 young immigrant workers died in a tragic fire at the Triangle Shirtwaist Factory in New York’s Greenwich Village . Within minutes, the fire spread to consume the building’s upper three stories. Firefighters who arrived at the scene were unable to rescue those workers trapped inside because the doors were locked and their ladders could not reach the factory floor. This tragedy galvanized a city to fight for labor reform and safety in the workplace.
Beginning days after the tragedy, the United Hebrew Trades [now the United Hebrew Trades – New York Jewish Labor Committee] marked the event with a memorial at the site. Each year, the UHT joins with UNITEHERE! [the union whose predecessor union had been organizing workers at factories such as the Triangle Shirtwaist Factory in the period of the fire] the New York City Fire Department, New York City public schools and others, to commemorate the lives of those who died.
Join us this year as we honor them and continue our fight for workers’ rights to safe working conditions.
WHEN Monday, March 26, 2007 — 12 noon – 1:00 p.m.
WHERE Corner of Washington Place & Greene Street – just east of Washington Square Park
UNITE HERE! Contact: Ed Vargas 212.265.7000

One thought on “96th anniversary of the Triangle Shirtwaist Factory Fire”