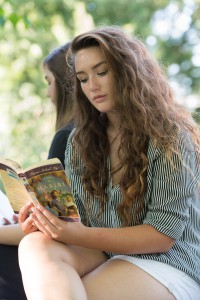 American Jewish kids are stupid. And fragile. Incapable of having complex and challenging emotions and thoughts without falling apart or becoming self-hating.
This is what I gleaned from two of the first results in my google search for “how to talk to my kids about the violence in Israel,” articles I have also seen throughout my Facebook feed of late. These articles continue the decades-old tradition of giving our kids talking points and propaganda when it comes to Israel, rather than anything approaching the challenging Jewish education we see fit to provide them in most other areas.
Jewish Students, or “Israel Advocates”?
The true subject of this post is a conversation with two brave Jewish leaders who have recently created materials (a curriculum guide called “Reframing Israel” and a documentary film called Between the Lines) to deal with this, but the situation in recent weeks has reminded us of what the problem itself is. Take the conclusion of one of these articles:

The potential byproduct from this could be that we find new and interesting ways to better achieve our aims of Jewish engagement. But at the very minimum, we can help guide our future Israel advocates, offering them the tools and training to be conversant with today’s Israeli-Palestinian affairs.

So let’s be clear: our principal aim for our kids is for them to become “Israel advocates.” And, hey, it would be nice if we actually helped Jewish kids connect to Judaism, too, but that is a distant second.
The other article focuses principally on how to shield your Jewish child from things that might bother them (or their parents). For example:

I need to reassure them…Israel is not just a country on a map. It’s a land filled with people and stories, and often I turn to the stories of real people to help them understand why I’m concerned, why this is important to us as a family, as a community, and as the Jewish people.

But as you read the article, you find that Israel is a country filled only with Jewish people who have Jewish stories (the word “Palestinian” does not appear in this article) but who live in a world where those stories are sometimes told by a biased media. Yet just as I gave up hope, I found the last sentence opened the door to a way forward:

I find every time I admit I don’t know an answer, every time I commit to my children to do the best to find the answers they’re looking for, they come back with more questions.

I will admit I wondered immediately where this author looks when doing “the best” she can to find answers. But I have two great starting points to suggest for anyone who really does want to challenge themselves to find a new story and model: filmmaker Ali Kriegsman and Rabbi Laurie Zimmerman. I had the privilege to speak with them both recently about their projects to try to help, well, make our kids less stupid and fragile.
From Betrayed to Filmmaker

Kriegsman, who graduated from the University of Pennsylvania in 2013, came to her project in a very personal and direct way. After coming to college from a Jewish day school education, she realized there was much she had not learned, had not been told. She felt “misinformed and betrayed,” as she describes it, in learning a version of history and current events built almost entirely on the official Israeli government and mainstream American Jewish community’s views and talking points. A version of events that will turn them in to those “Israel advocates.”
When she started to understand that these were not the only versions of events, she was stunned, a process she also explained in this article. She began talking to her friends and classmates and realized that she was not alone. And that the stories of what they were feeling and experiencing needed to be told as well.
But why did the stories need to be told? What was different about this, as certainly there are other areas where they felt not fully informed or educated? Kriegsman explains that the way Jewish day school kids are educated currently about Israel hits on their emotions as much as their intellect. Israel-related issues often imbue the entire curriculum, rather than being their own subject, and presented in ways designed to build an emotional connection to Israel while they educate. And that means leaving aside other narratives, approaches, or nuances so that the connection can be clear and strong.
Creating “Pre-Established Emotions”
It is entirely appropriate to strive for such a connection, but as one of the film’s interviewees reveals, it means that Jewish kids come to any discussion of Israel with “pre-established emotions.” Students find it difficult to engage in other forums, but when they do, they find themselves not just questioning the facts of what they were taught, but the entirety of their education.
That can be quite traumatic because of how much it undermines what students believe to be their essential foundations. It can also impact personal relationships as a result; although Kriegsman’s parents have been supportive of her work, many of her friends have not been because they cannot get past the emotional fears about what happens when you question Israeli actions or policies.

As a rabbi, educator, and parent, Rabbi Laurie Zimmerman had encountered these concerns and emotions many times. So much so that Rabbi Zimmerman, who is the rabbi at Shaarei Shamayim in Madison and has been involved on Israel-Palestine issues in many ways over the years, began simply writing her own materials for the “Bet Sefer” program at her synagogue. Materials that would begin by building that same Jewish and emotional connection to Israel but then move away from simply teaching talking points that could be used to rebut arguments from the “other side.” Instead, Rabbi Zimmerman sought to round out the emotional connections by respecting students to challenge themselves from within that connection, a process she saw in her own children and wanted to build on.
She took the opportunity of her sabbatical to form these materials in to a broader curriculum, designed for different ages and with a variety of exercises and approaches, so that individual elements could be used as they fit. Rabbi Zimmerman explains that she focused extensively on the use of novels for teaching children of all ages because of their ability to touch kids in different ways. To present stories and narratives in intensely personal and human ways that go beyond talking points and facts and in ways that kids can really connect with.
As Rabbi Zimmerman explained in this JTA op-ed, she sees our children as bright and ready to learn and that they can get beyond fruitless debate. A comprehensive and effective Israel education needs to balance self-reflection and critical thinking, thus incorporating emotion and intellect. Teachers do not need to be experts on all sides of the issue, just as they are not in many of the subjects they teach. But when they rely on what they are being given by most schools, they bore kids by just telling them what to think. Teachers – and parents, synagogue boards and school administrators, and the community — need to be willing to open up to it and letting the students explore and engage for themselves. To use that Jewish education.
Trust Your Children
Speaking with Ali Kriegsman and Rabbi Laurie Zimmerman can restore one’s faith in the possibilities for the long-term future, in what will happen when we create emotionally-connected scholars rather than emotionally-guilted advocates. But can the mainstream make progress now, even if just by offering some different resources for exploration? It would seem so. As stated quite plainly in The Forward by the director of the the Teaching Israel Fellowship at American Jewish University and the Children’s Learning about Israel Project at Brandeis:

There is no evidence that learning about Palestinians will weaken American Jewish children’s connections to Judaism or to Israel, and there is ample reason to think it will enhance their understanding of both current events and history.

Both Kriegsman and Zimmerman believe that the traditional American Jewish approach to Israel education does build a keen sense of responsibility. American Jewish kids feel intensely connected to Israel and responsible for what it does and for its well-being. They want their parents and teachers to really do their best to find them answers.  If they get honest answers that reflect reality for all sides, not just the official Israeli side, then their understanding and connections could be enhanced.
But that may not last forever.
As American Jewish kids realize that they have been treated like they are stupid and fragile for so long, they may simply choose to walk away from their education and connection because the emotions are too painful to stay with. The key to the future is for our leaders and educators to realize that it is not that teaching other approaches and narratives will weaken the connection, but rather that staying with their current approach will. Because the current approach rests on the kids we teach so intensely to question, to wrestle, to challenge in all else that they do to simply put those skills aside when it comes to Israel. To be stupid.
And I am quite sure American Jewish kids are not stupid.