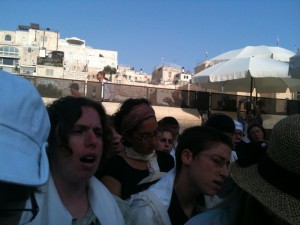 Anat Hoffman of Women of the Wall Arrested

Anat Hoffman, who is often the most public face of Women of the Wall (Nashot HaKotel), was arrested this morning during WoW’s Rosh Hodesh Av service. It’s not yet clear what the charges are.

The WoW gathering was huge this morning, and from the beginning, things were a little edgy. There was a lot of media present (which I might guess has been the case since Nofrat Frenkel was arrested, but this was my first time going since that happened, so I don’t know) and one of the police that works at the Kotel was assigned to the group–either to protect us from Haredi attacks or to keep us in line, as needed. We were positioned closer to the Wall than usual (because, naturally, there were so many people there that we had to move forward to give everyone space). Women were wearing tallitot as scarves, to which our assigned policeman did not object. He did, periodically, try to tell people not to sing too loud, and eventually another policeman came by with the same message.

We finished Hallel and began to proceed, according to the terms of the Israeli High Court (Bag”tz) decision, to Robinson’s Arch to read Torah, with the intent to preserve the continuity of the service by escorting the Torah in song.
Now, it should be noted here that WoW has had a hard time lately getting the Sefer Torah into the Kotel area, even though Bag”tz permitted it in its ruling. I won’t reveal how they got it in this time around, but it took some maneuvering.
It is perfectly kosher, according to the Bag”tz ruling, to take the Sefer Torah out of its bag, as Anat did this morning, by the Kotel, to carry it to Robinson’s Arch. It is not permitted to read from the Torah in the women’s section, and we did not. We were singing and escorting the Torah, and things got more and more tense, with police trying to physically push Anat out of the women’s section and she (and those of us holding on to her) was trying to walk out, but at a more dignified pace. Eventually there was a skirmish involving the police trying to physically take the Torah out of her hands (we were now out of the women’s section and on our way over to Robinson’s Arch) and somewhere in all of that, they arrested her, and she was taken into custody (as was the Torah).
The rest of the group proceeded over to the police station by Jaffa Gate to stand outside and finish our service–we read the Torah portion for Rosh Chodesh (from a Chumash, as we had no Sefer Torah) and davvened Musaf. We then kept singing for some time, because, Nofrat said, Anat (who was inside the police station somewhere) would be able to hear us. (Nofrat knows from personal experience, natch.) Presumably Anat will be released sometime in the next few hours and we’ll see what happens from there.
Hodesh tov, everyone. The Temple was already destroyed once because of sinat chinam (baseless hatred). I think my mourning this Tisha B’Av might be more about things present than things past.
ETA: Hoffman was released after five hours of interrogation, is barred from the Kotel for 30 days, was fined 5000 NIS, and evidently the police are consulting about whether and for what to charge her.

40 thoughts on “Anat Hoffman of Women of the Wall Arrested”