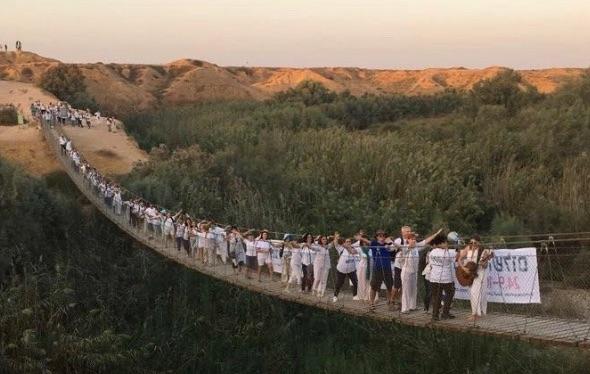 On September 25, one the first days of the new year, the Israeli women’s grassroots activist movement Women Wage Peace (Nashim Osot Shalom) embarked on an impressive “Journey to Peace,” a multi-day march through the land of Israel-Palestine, which will culminate next week during the holiday of Sukkot. This is not the first ambitious undertaking of Women Wage Peace (WWP), who have an impressive history of disruptive, bold, radically optimistic, and resilient activism. “We,” write the activist collective in their press release about the Journey, “who fasted for 50 days in front of the Prime Minister’s residence, who marched 200 kilometers from Rosh Hanikra in our March of Hope, who rode by train from Nahariya to Sderot, who stood at 140 intersections throughout the country – we are beginning a journey that will echo in Israel and around the world: Peace is possible.”
In June of this year, I had the opportunity to interview, with AJPA Director Aliza Becker, one of the leaders of this movement: renowned journalist, activist, and human rights advocate Anat Saragusti. We met with Saragusti at the central public library in Tel Aviv. She spoke about the dreams, challenges, ideology, and strategy of this singularly powerful activist movement. As the group embarks on their latest venture, and as we stand in the wake of our Jewish season of reflection and commitment to change, we thought that there is no better time than now to share these reflections from one of WWP’s leaders.
Anat Saragusti grew up in Jerusalem in the 1960s. Her family has been in Israel-Palestine for generations; on her father’s side, emigrating from Zaragosa, Spain after the Spanish Inquisition more than 500 years ago, and her mother’s family from Morocco at the beginning of the 19th century. She became active in WWP from its inception after the Gaza War in 2014. Since that time, the movement has seen enormous growth; as of May 2017 there were 20,000 members. “I think it’s maybe the biggest movement right now in Israel, in terms of promoting agreement between the Israelis and Palestinians,” Saragusti explained.
There are many ideological and strategic foundations of WWP which set it apart from other peace initiatives. First of all, that it is led by women, and committed to women’s leadership and involvement in resolution at every level from grassroots to diplomacy. As Saragusti explained, “especially in the Israeli context and maybe in the U.S., too, women don’t feel free and comfortable enough to speak about diplomacy and state diplomacy and state security. I think we created a safe space for them to speak about these issues.” The backbone of this principle is U.N. Security Resolution 1325, which advocates that women should be involved at every level of conflict resolution.

The second differentiating aspect that Saragusti pointed out is that WWP is a nonpartisan organization that brings together women from diverse political opinion and voting patterns. She explained: “I think [WWP] has a potential to break the paradigm between left and right, because it doesn’t specify which kind of agreement we promote, as long as it’s respectable, nonviolent, agreed upon by both sides.” Saragusti explained that, although they are not the majority, women who are right-wing voters are also part of WWP, united by a hope for a better society and better lives. The majority of WWP’s membership is comprised of Jewish Israeli women, and they collaborate with Palestinian women’s initiatives, as they will during this week’s Journey to Peace. From its foundation, the group took inspiration from other women’s movements within states of conflict such as Northern Ireland and Liberia.
Third, the strategy of WWP is centered on “speaking for, and not against,” Saragusti explained. This means that the group’s actions primarily support leaders who promote a vision of peace. Saragusti explained, “We support the leaders whenever they speak about reaching an agreement, open negotiation, going back to the table. We do not oppose them. We do not protest. We support.” This strategy is a paradigm shift from other peace initiatives in Israel whose primary objective is to protest against the brutal and unjust actions of the government.
Why should U.S. Jews care about peace and justice in Israel-Palestine? Saragusti’s reflections on the role of American Jews comes in part from her experience living in the U.S. for two years as a graduate student, a reporter, and most recently as the director of the USA office of the Israeli human rights group B’Tselem. According to Saragusti, “whether we like it or not,” all Jews are implicated in the conflict. Prime Minister Netanyahu frequently speaks about “Am Israel,” by which he means Jews all over the world. “So we are connected,” says Saragusti, “whether we want it or not, by these declarations, by this rhetoric.”
However, in Saragusti’s mind, there is a gap in understanding between Jewish activist groups in Israel and their American pro-peace analogues. On a recent trip to the US, she found the dominant paradigm was “to speak about the conflict and not about the occupation.” According to Saragusti, the problem with this framing is that “it constructs the reality on the ground as if there are two even sides…and if only we could bring the two parties together in the same room, of course, with males in suits and ties, we could solve it.” She believes this misguided and male-centered strategy ignores “the imbalance of power between Israelis and Palestinians,” and the significant role of Palestinian grassroots activists “who suffer from violations of their basic human rights on a daily basis.”  She has found it very challenging to convince American Jews to shift from their near exclusive focus on diplomacy to speaking boldly about the occupation and the systemic injustices carried out by the Israeli government.
Saragusti believes that the primary work of peace-and-justice-minded American Jews in this struggle is to be done in the U.S., not in Israel-Palestine. What is that work? Saragusti suggests Americans should pressure Israeli visitors, especially decision makers and ambassadors who “should see that there are other voices, not less important than mainstream, rightwing, powerful voices coming from the [American] Jewish community.” American Jews should also pressure their own government to aid on the path to peace, rather than deepen the horrors of the occupation.
Saragusti’s message for the Israeli public is especially important for American Jews to hear: “There is not any kind of existential threat on Israel.” This fear is overblown by the media in support of a rightwing agenda. “Even with ISIS around our borders,” she said, “and collapse of some of the Arab countries around us, there is no threat on Israel. I think we need to make people believe this.” Once people are able to dispel their deep existential fear about Israel, Saragusti suggests, only then will we be begin thinking about peace and justice in their region.
On Sunday, October 8, the Journey to Peace reached the Dead Sea, where thousands of Palestinian women joined in a show of solidarity and hope. They met at the border to proclaim that their vision for justice is possible. That night some 30,000 people took part in a WWP rally in Jerusalem. As we as American Jewish activists begin our new year, may we take some inspiration from these thousands of women’s ability to put their vision into action.
To watch a livestream of the Journey to Peace actions, see their Facebook event page.