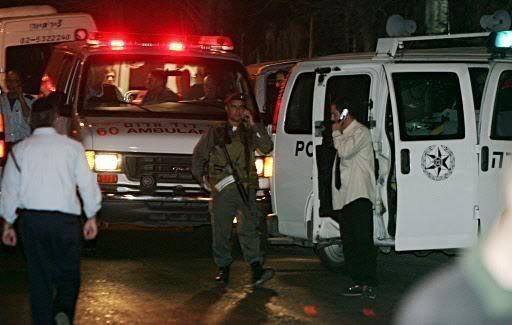 Now that we have brought out our dead and escorted the slaughtered kedoshim to their final graves, now that we have torn our garments and have begun to recite kaddish and Tehillim, now that the blood has been mopped up from the floors of the beit midrash, Israel — and indeed, the entire Jewish Nation — is beginning to enter the painful phase of “where do we go from here?”
While Hamas of course are still making statements praising the operation as a “normal response” to the Gaza incursion (with Hezbollah now distancing themselves from it), Olmert is still insistent that roads of communication must remain open with Palestinian local leaders, and that we must still continue on the road to peace. Jerusalem’s Arab citizens say they fear Israeli reprisal, and Women In Green is calling for eight new settlements to be constructed in the West Bank, in memory of the eight murdered yeshiva students:

“The Jewish Zionist revenge must be an immediate revenge by establishing eight new communities throughout Judea and Samaria in memory of the those murdered, especially in light of the fact that the Mercaz Harav yeshiva symbolizes the settlement in the Yesha region,” a statement from the organization read.

(As an aside, it is so refreshing to see a charedi rabbi speaking so highly of Obama’s plans for dealing with terrorism.)
However, I must say that I agree in this one case with Chief Sephardic Rabbi Shlomo Amar above all things:

“This is a tragedy of the entire nation of Israel; we are all crying, we are all mourning… Let us arouse to distance ourselves from all hatred and disunity, and let us increase love, brotherhood and Torah study…” he added.

Like I ask on thisisbabylon.net, if the Talmud teaches us that “G-d, Israel, and the Torah are One”, if yeshiva students can be murdered with their blood spilling out over their volumes of Talmud and if it can happen in the Holy City of Jerusalem, if the Torah is not protecting members of Israel in Israel, what does that say about our relationship with Hashem?
Metaphysically, how can it be that a terrorist can accomplish such a thing? The Torah is supposed to protect us!
In addition to the military one, I believe the Jewish Nation has been called upon a very important spiritual reconnaissance mission — one that can be ignored no less than Hamas — and it behooves all of us to find the “breach” in our collective soul’s “security fence” to insure, on both physical and spiritual planes, that never occurs again.
Increase love, brotherhood, and unity. Shalom al Yisra’el.

3 thoughts on “Beyond the Massacre”