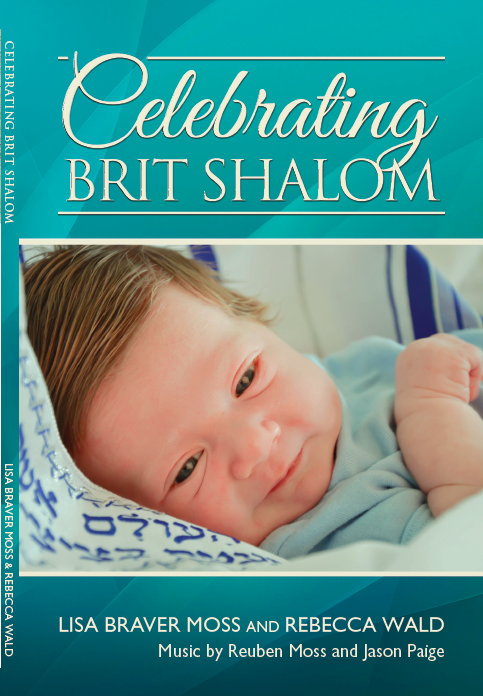 In November, I attended the Union for Reform Judaism (URJ) 2015 Biennial conference in Orlando, Florida, where my co-author Rebecca Wald and I had a display booth in the exhibition hall. We were there to showcase Celebrating Brit Shalom, the first book written specifically for Jewish families opting out of circumcision. With the thousands of Reform rabbis, cantors, and lay leaders in attendance, we were eager, excited—and, frankly, a little anxious about how our book would be received.
It was an extraordinary experience: demanding, invigorating, exhausting—and exhilarating.
Among about a hundred vendors of quality art, jewelry, handmade synagogue furnishings, prayer shawls, Jewish books, and other Judaica, plus exhibitors for Jewish organizations and Israel travel packages, we did raise some eyebrows. But the vast majority of visitors to our booth were respectful, and even our detractors seemed to walk away a little more curious or thoughtful and a little less judgmental after talking with us.
Some were delighted about our book of ceremonies being available, and immediately appreciated our view that families deciding not to circumcise should have Jewish options. On a number of occasions, people expressed deep personal gratitude for our presence.

Quite a few rabbis had already performed brit shalom (covenant ceremonies for non-circumcising families). Several clergy members came back multiple times to talk with us because they were so enthusiastic about what we’re doing.
A few visitors to our booth didn’t realize that there are Jewish families skipping circumcision and wanted to know more about the families’ thinking. Others, unaware of the procedure’s drawbacks, couldn’t understand why anyone would opt out. We heard numerous stories about difficult brises—surprisingly, both from those who liked our booth and from those who didn’t.
Some people were confrontational, declaring that circumcision is essential; we explained that not every Jewish person feels that way, and that our book was for those seeking ritual alternatives. Some people avoided us altogether. On at least one occasion, a rabbi apparently wanted to talk with us, but sent someone else to gather information because he didn’t want to be seen at our booth.
A couple of clergy members told us they were privately against circumcision. One clergy person said she and her husband, also clergy, were both strongly opposed to circumcision—and had gone through with it in their family only for fear of professional repercussions if they didn’t.
But perhaps the biggest shocker was that we talked with two separate rabbis who had decided not to circumcise their own sons!
[pullquote align=left] “Don’t ask, don’t tell” conveys the message that there is something to be ashamed of in the decision not to circumcise.
[/pullquote]Meanwhile at the Biennial, the Reform movement passed a resolution on the rights of transgender and gender-nonconforming people. Although circumcision is a family’s choice (rather than a matter of a person’s innate being), I think there are parallels regarding the issue of welcome and inclusion.
For example, a few rabbis indicated to us that they were fine with families’ not circumcising, but preferred a kind of “don’t ask, don’t tell” policy about it. While privacy about such a decision might seem decorous, “don’t ask, don’t tell” conveys the message that there is something to be ashamed of in the decision not to circumcise. Given that the very basis of Reform Judaism is choice, a family should never be made to feel their ritual decision is shameful or “less-than.”
That’s why, besides selling the book at our booth (and giving away a number of copies), we provided a flyer outlining concrete steps that synagogues can take if they wish to send a clear message of inclusion to these families. The flyer was so popular that we kept running out and having to photocopy more.
We do have work ahead of us. Here we were with a message of inclusion, a message about the need to reach out to families that might not otherwise consider Jewish affiliation. Clergy not wanting to be seen talking with us? Rabbis not wanting to publicly acknowledge their own ambivalence about this ritual? If the leaders of our community feel this skittish, it’s little wonder that non-circumcising families aren’t sure whether they’re welcome.
[pullquote align=right] A true highlight for me was getting to talk personally with the president of the URJ, Rabbi Rick Jacobs.
[/pullquote]A true highlight for me was getting to talk personally with the president of the URJ, Rabbi Rick Jacobs. He took the time to look over our posters and materials, bought a book, and seemed particularly interested in our photo collage of brit shalom families. As I explained to Rabbi Jacobs, the graphic designer for that poster wasn’t even able fit in all the families’ photos we had given him to work with. It appears that brit shalom is a growing trend.
I am moved by how many of the Biennial attendees appreciated our addition to the Jewish conversation. Most of all, I’m grateful to be part of a tradition that, at its heart, invites intellectual and spiritual inquiry.