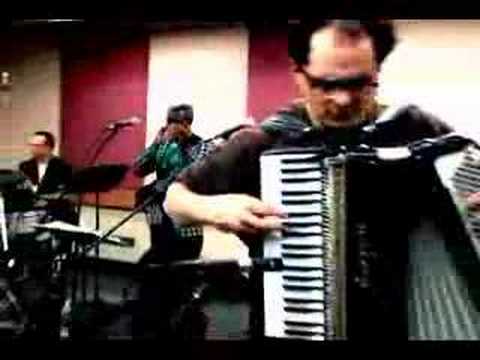 Review of the Abraham Inc. Album Release Party, Le Poisson Rouge, NYC, 2/25/2010.
I feel like I just saw two different David Krakauers on stage. The first one I can only describe as avuncular and earnest. Like your uncle Dovid hearing your high school jazz band and really getting into it, smiling, dancing, clapping, just a really big smile on his face as he’s connecting with this music in a new way because of personal attachment. He’s inside it, and he’s really digging it. This funk the kids play, it’s really something!
David Krakauer number 1 must feel that way in part because of how David Krakauer number 2 tore it up on stage. When not smiling and nodding his head and bantering with living funk legend Fred Wesley about how “Jewish people break bread,” Krakauer was going bananas within some fantastic grooves constructed by him, Wesley, and crazy hip hop/klezmer accordian master So Called, and built to specifications by a great rhythm and horn section backing the three masters. C Rays Walz was laying some game on top of this madness, and occasionally cracking up at the scene that erupted once the band doubled the time and went into a freylich. To be clear, C Rays Walz, not all of us run in a circle all the time.
But these tunes were crafted so expertly that it made the easy melding of funk and klezmer obvious… well, obvious to anyone who wasn’t me, anyway. I loved the Klezmatics’ Brother Moses album, but felt it stopped short because it felt fairly separate: klezmer with amazing singer here, klezmer band covering gospel songs there. But for me, the best kind of klezmer is already headnoddingly funky. So when Krakauer is repeating a great syncopated riff, and suddenly Fred is leading the horns in “Pass the Peas” underneath, and they fit together perfectly like the missing jigsaw puzzle pieces, OF COURSE it makes sense.
I have no doubt in my mind that So Called was the catalyst that put all this together, and being a student of both klezmer and hip hop, he was able to bring all this talent together and guide it to this fantastic place. Kudos to you, man. The musicianship was great across the board. And C Rays Walz was a tremendous hype man barely saying a word, just reacting to these masters laying it down, and still sneaking some great lines of his own. And what can one say about Krakauer and Wesley? Great to get a chance to see them at all, but together? Man.
Only gripes: we would have loved a longer set, both because y’all were great, and because the tickets were not the cheapest. By comparison: Galactic, featuring New Orleans Klezmer Allstars moonlighters Ben Ellman and Stanton Moore, had an opener, and Corey Henry and Cyril Neville with them, played about an hour longer for the same price. Don’t get me wrong, happy to support such great musicians, and would do it again.
The other gripe is with the crowd. You know who you are. When Fred Wesley is playing, you don’t just kinda sway side to side 15 feet from the stage. And you don’t wait for a freylich to dance around, and have the only dancing you do be a hora. Fred Wesley co-wrote and led the horns on so many James Brown tunes. This is a Funk LEGEND. Don’t leave enough room between you and the stage to drive a truck through, and dance, dammit! I mean, look at how happy and into it David Krakauer was! That alone should have made you lose your “I’m too cool for school” vibe and start dancing. Maybe after you pinched his cheeks.
Lastly, I knew this was the place to be when, in the audience, I bumped into Anat Cohen, who i hadn’t seen since she tore it up at Jazzfest. I immediately asked her if she was gonna jump up with the band, but she told me she was just there to dance. And she did, immersed in the awesomeness like the rest of us.
Look out NOKAS. After many years, you’ve finally got some funky klezmer company. But then again, maybe they’ll just want to break bread with you.