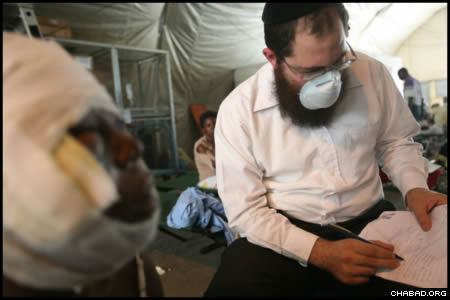 Against the backdrop of its own moral and economic scandals, The Lubavitcher Hasidim are among those Jewish groups aiding the people of Haiti with important and professional aid. The presence of those loyal to the teachings of the Lubavitcher Rebbe seems underneath, or perhaps above, the Jewish media’s radar.
Chabad.org writes:

Jan 17, 2010 1:10 PM
Rabbi Shimon Pelman, the director of Chabad-Lubavitch of the Dominican Republic who crossed the border into neighboring Haiti on Friday, described the contrasts as day and night.
With hours to go until the onset of Shabbat, the rabbi counseled earthquake survivors in the devastated capital of Port-au-Prince and was briefed on efforts undertaken by United Nations troops and aid workers in the city.
Pelman, who in conjunction with Chabad of the Caribbean has set up a relief fund and Web page to keep people abreast of developments, said that those who were lucky enough to survive the Jan. 12 quake were in desperate need of food, water and medicine…
After the close of Shabbat Saturday night, he and his wife Michal Pelman, and two rabbinical students who were dispatched from New York to help during the tragedy, prepared boxes of hot meals and sent them with an Israeli convoy travelling across rugged terrain to a field hospital in Port-au-Prince. The rabbi also arranged for a local bakery to prepare bread for foreign military forces in Haiti, including an Israeli delegation that numbers in excess of 220 personnel and is comprised of K-9 search-and-rescue units, a medical team and support staff.
Sunday morning, the rabbi was working the phones to secure warehouses to support the effort.
He said that his journey to Haiti on Friday was sobering. What he saw among the lucky survivors who managed to obtain shelter at a tent set up outside the half-destroyed U.N. headquarters, he explained, was heartbreaking.
“People are waiting for something to happen,” he said. “They have no food, no water, no medicine.”