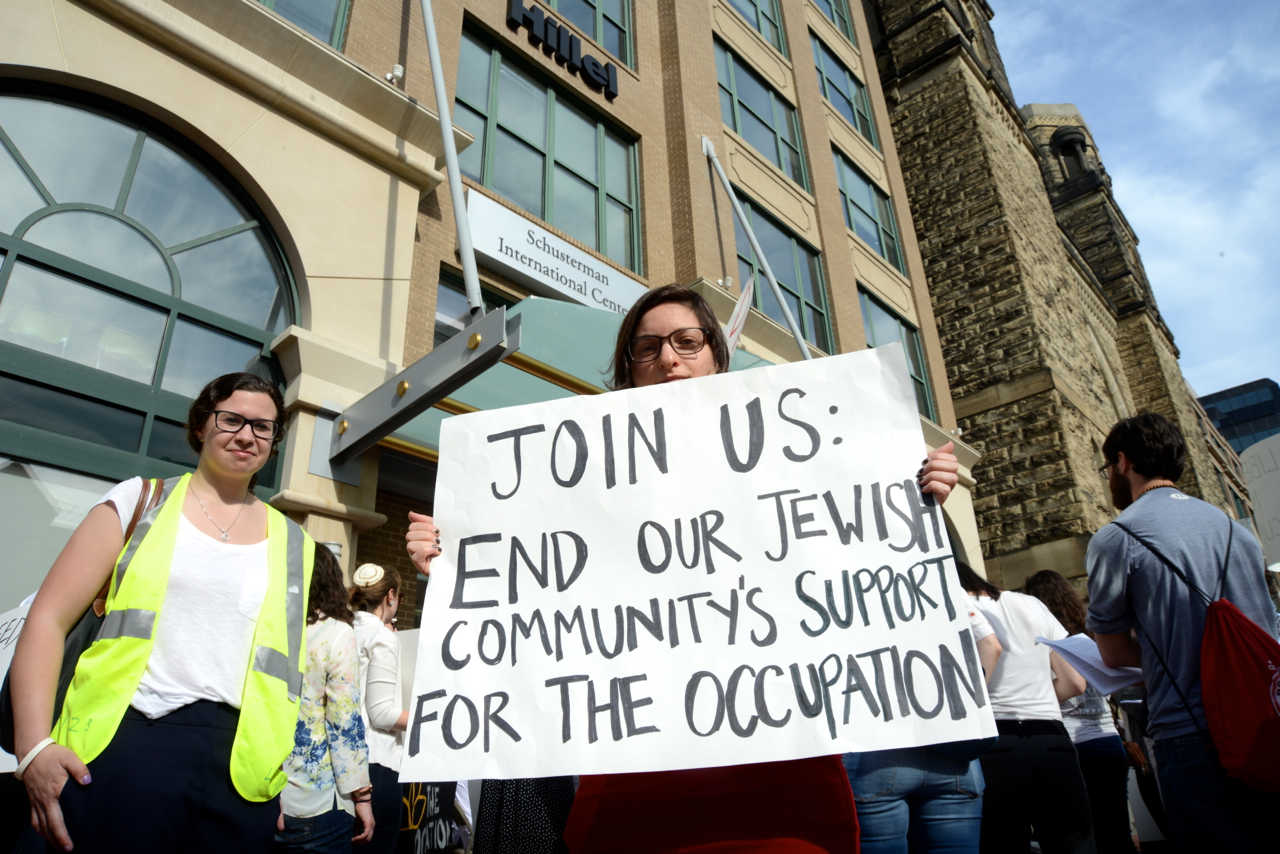 Coming Out As Anti-Occupation

April 1, 2017May 4, 2018 by Liya Rechtman
[pullquote align=right] Young staffers are scared into silence about their politics for fear of losing their jobs.
[/pullquote]“Okay, you can’t record this” is always the beginning of a good conversation. I press the red record button and show The Writer that the flashing light that’s been taping the first forty minutes of our conversation is off. The Writer sighs, glances around at the rooftop landscape of the office where The Writer works in Tel Aviv, and takes another long swig of his espresso, before mentioning the word “occupation.”
Unrecorded: I don’t want people to know that I support the BDS movement. They don’t know that I support BDS and I want it to stay that way.
I’ve heard this line before. The fear and anxiety as being “outed” in the Jewish community as anti-occupation or, less frequently, in the anti-occupation is a common theme among my age cohort of people approximately 22 to 25.
Once, in line for a lunch buffet at a Jewish community leadership function, a young staffer (let’s call him The Assistant) sidled up to me. “How’re you liking the meeting?” The Assistant asked.
“Great falafel! And the meetings been fine,” I nodded, “but some people here are a lot farther right than I am.”
“I know what you mean.” The Assistant paused, nervously scooping an enormous serving of chopped cucumber and tomato salad onto his plate.
“Um, do you know Yonah?” I didn’t Yonah personally, but I knew who he was and I knew what The Assistant meant. ‘Yonah’ referred to Yonah Lieberman, one of the leaders of If Not Now, the young anti-occupation grassroots protest movement catching fire across major cities in the United States.
“I do know Yonah. Are you a friend of his?” I asked The Assistant.
The Assistant bent over and whispered in my ear. “No one here knows that I do anything with them. They can’t find out or I’m gone. Let me know if you want to talk after.”
[pullquote align=left] To be a friend of Yonah in today’s Jewish community’s political climate was exactly like being a Friend of Dorothy fifty years ago.
[/pullquote]This is what it means to be a young person in the North American Jewish community today. The Assistant was working for the Reform Movement, the largest Jewish organization out there opposing the nomination of President Donald Trump’s Ambassador to Israel David Friedman, supporting a two-state solution, and decrying home demolitions in the Palestinian village of Susiya. And yet here, young staffers were scared into silence about their politics for fear of losing their jobs.
To be a friend of Yonah in today’s Jewish community’s political climate was exactly like being a Friend of Dorothy fifty years ago. Friends of Dorothy, i.e. gay men and women also hid their personal lives in their professional spaces. They also were part of secret after-hours political and social movements that, had they been found out, could have landed them out on the street at both work and home. They kept quiet about what mattered to them most because the world wasn’t ready for them. Their institutions didn’t want them. “Yonah” was our blue hanky and our pink triangle.
[pullquote align=right] And I’ll bet your under-35 won’t say a word to you about it unless they’re off the record.
[/pullquote]And when we do come out? Bad things happen. People do get fired or, more likely, have trouble finding a next job after they send a scorching letter to their former boss. More likely, of course, young anti-occupations Jews prefer to stay out of the Jewish community entirely. They spend their Shabbat services and holidays in non-institutional, alternative Jewish spaces, creating their own rituals and leaving synagogues, JCCs, and campus Hillel events empty. But there are those that stay.
There are some of us who care enough to want to work for our representative organizations. Some of us stay in our Movements (Reconstructionist, Reform, Conservative and even Orthodox), some of us that put in the hours at the Jewish Council for Public Affairs (my former employer), the Anti-Defamation League, or other national and local community organization. We stay involved and hope that through diplomacy and honest conversations, we can change the leadership from the inside. We stay quiet because we’re worried about what would happen if we didn’t.
So to the Jewish alphabet soup, to the JCRCs, JCCs, JCPAs, and to the Federations: Next time you find your Jewish institution being protested by an anti-occupation group, ask your under-35 staff what they think about what’s happening. I’ll bet you that they know a whole bunch of the people protesting. I’ll bet they thought about joining in. I’ll bet they won’t say a word to you about it unless you promise them that their answers are off the record.