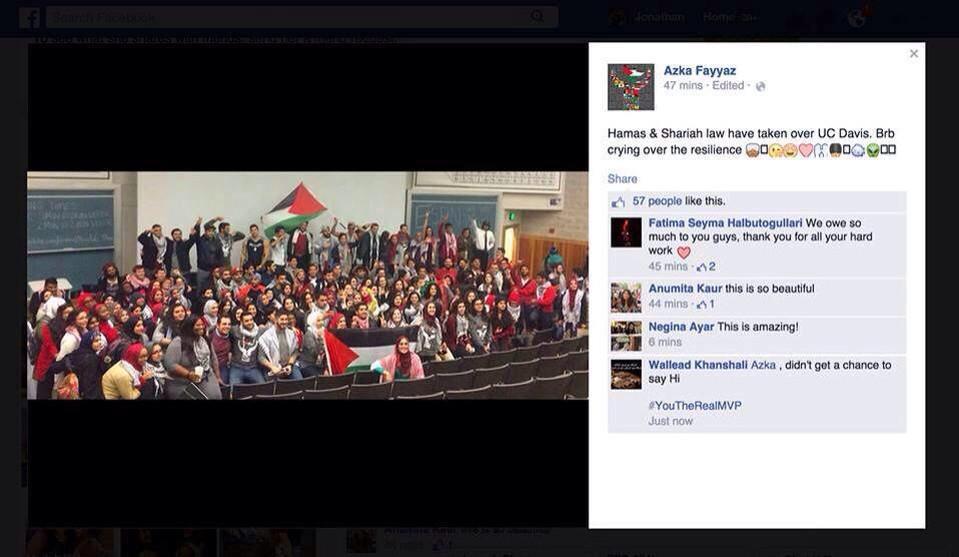 Just outside the sprawling Sacramento Delta, Davis is situated within the bucolic environs of some of the most fertile farm land in the world. Also the home of the homonymous University of California Campus, this small town and its large university has but a few claims to fame, but its moderate-sized progressive activist community is one of them. In 2011, UC Davis police officer Lt. John Pike pepper sprayed Occupy demonstrators on the quad. The town and university have long had a strong LGBT community including a Gender and Sexuality Commission as part of the student government. There was also a very active Farmers Market and I believe an active Communist Party.  I am a proud alumnus of this university and loved living in this town.
Last week, after many rounds of debate, the ASUCD Senate passed a toothless resolution calling for the UC Regents to divest from Israel. The pro-Israel community beat back this resolution last year but was unable to keep it off the agenda or ultimately stop Resolution 9 from passing 8-2-2. The pro-Palestine group did not use a particularly progressive activist approach for this political action. Rather they took a very regressive and troubling approach, celebrating the victory by what I have been correctly told was a sarcastic Facebook post noting that “Hamas and Sharia Law have taken over UC Davis.”
This is a horrible joke and my guess not so welcoming to the Jewish members of the BDS movement. Now, without getting into the merits of toothless student government resolutions — of which I wrote many during my time as an ASUCD Senator — Hamas is an active terrorist group and really not something you want to joke about. Celebrate all you want, be proud of your democratic achievement, as meaningless of a symbolic gesture as it may be. This falls in the same category as a bunch of guys dressing like suicide bombers and posting the pictures online…as a joke. But in this case we are seeing it in the context of campus politics. While I originally believed this to be a serious post, because of who sent me the picture, I feel that this dismissive attitude is almost worse.
To be able to call this divestment campaign purely anti-Zionist, or even just pro-Palestine as many have claimed it to be, and not anti-Semitic, is very hard to do when a large segment of those siding with Resolution 9 sarcastically aligning with a group bent on killing Jews.
It is the environment that allows this kind of joke that leads to more problems.

The divestment vote happened on Thursday of last week. Then early on Saturday morning, two large swastikas were spray painted on the side of the AEPi fraternity. I am also a proud alumnus of this fine institution. AEPi has pretty aggressively sided with right-wing pro-Israel groups as of late, and I am critical of their decision to vote out JStreet from the Council of Presidents, but that is neither here nor there. At Davis, the frat is better known for raising funds through stunts like cow-pie bingo and throwing parties than for international policy. The fact of the matter is that Jews on this campus are being conflated with Israeli policy and no matter what we say within our community, the outside world sees us as one big Jewish group
Here is what this post isn’t:

Rather this is a call to see the reality of the situation. A large enough group of people are infecting the debate within this university and others to the point where it is completely acceptable to post a picture online, for all to see, making light of Hamas. Criminals feel comfortable enough to deface a Jewish institution with a symbol of hatred. This isn’t an inclusive or productive debate any longer. This is not healthy and ultimately will lead to further violence — such as the attack on AEPi.
As an alumnus I want to believe Davis is better than this. A university is an environment where we all deserve to disagree, debate, and fight for the better world differently without threats or violence. It is a place were all should be included so we can learn from each other. But when you see a group laughing in the face of legitimate concerns on campus you must ask, how long can we — the liberal-progressive-lefty-inclusive folks — allow it to stay in the name of inclusion?
While boycotts, sanctions and divestment campaigns are legitimate political tactics, which should be allowed on campus and debated vigorously as only college students can debate, there is no room for violence in the UC system. I really hope that rallying with the UC Davis Jewish community something progressive Jews can get behind and help a divided university community heal.