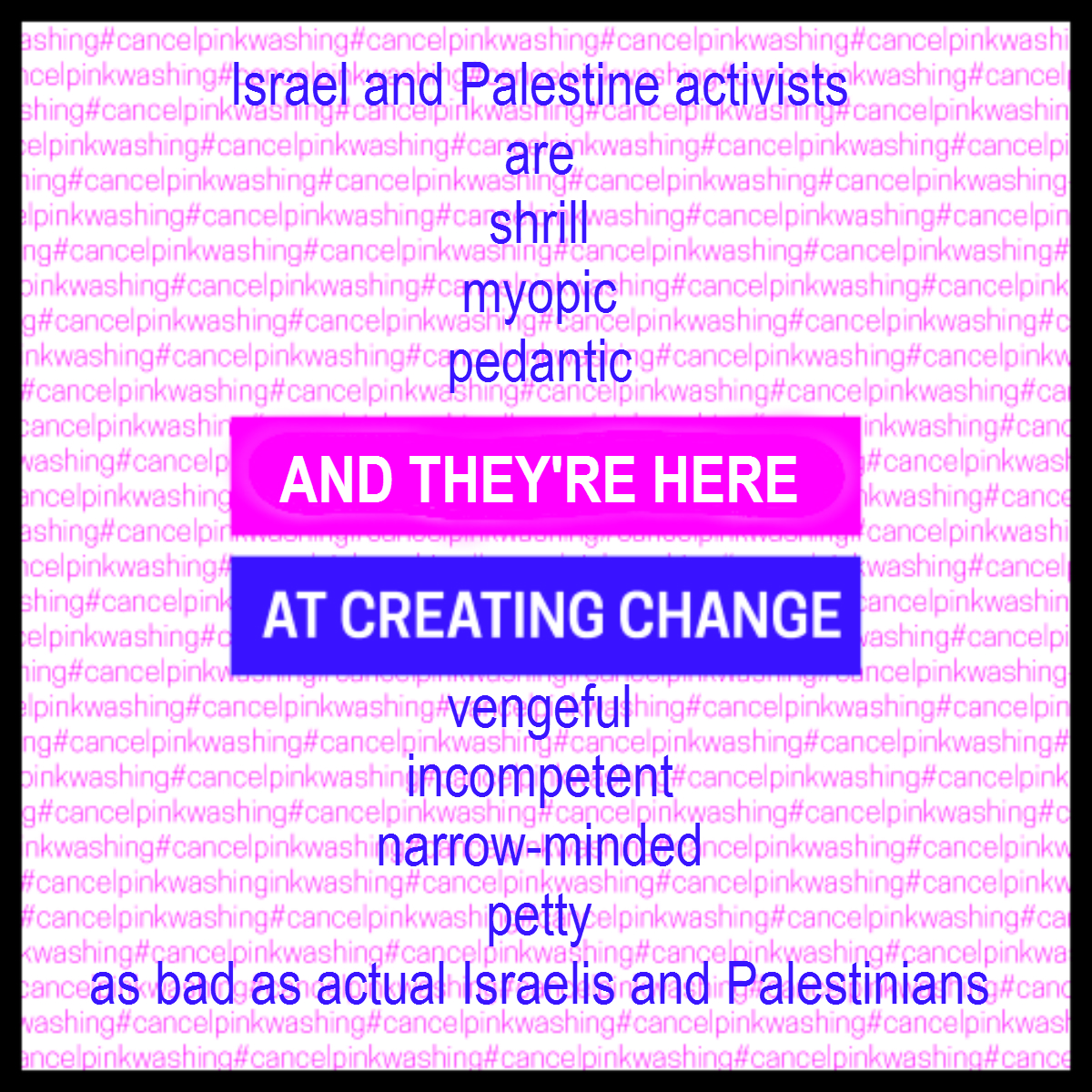 Creating Change was Right to Reinstate A Wider Bridge

— While our work is focused on building connections with, and support for, Israel’s LGBT communities, we are acutely aware that other human rights struggles exist, both within Israel and in the Palestinian territories. Our pride and celebration of Israel’s progress in LGBT rights does not mean that we endorse all the policies of its government. We hope for a time when Palestinians will live in dignity, free from occupation, and Israelis will no longer live with the daily threat of rocket fire or terrorist attack, or the fear of nuclear war.

A Wider Bridge isn’t a threat to Palestinians. In fact, it’s not insignificant to wonder how many people met their first Meretz or Chadash voter through them.
So why is this sleepy little organization attracting the attention of BDS activists? Because A Wider Bridge is a low-hanging, easy-to-bully punching bag. It has no mountains of Israeli government cash, no star-studded pantheon of pro-occupation queers marching across America, and no name recognition outside the Jewish community. It’s donors are a few yawn-worthy foundations. That means it can be painted however critics want, virtually uncontested, and take us all for a ride.
The #CancelPinkwashing statement doesn’t hide what it is — a BDS ultimatum. The authors demand that Creating Change, in effect, ban forever all Israel-sympathizing programs and endorse the full boycott, divestment, and sanctions platform. That is why the ultimatum needn’t accuse A Wider Bridge of support for Israeli settlements –Israel’s existence is the offense at heart. BDS means many things to many people but “uncontroversial” is not one of them. By taking a stance on a deeply divisive issue, #CC16 could very well split itself into smaller caucuses: the pro, the con, and the “you all are crazy!”
[pullquote align=right] Single-issue activists on the right and the left are instead cannibalizing our communities.
[/pullquote]And here’s where I feel the #CancelPinkwashing campaign has screwed all of us who care about ending the occupation. Several years ago, the much-ballyhooed Israel Brand Group study revealed a gem: Palestinian solidarity activists were undermining their cause in the broader public — as were pro-Israel advocates. The incessant, shrill, hyperbolic, pedantic pissing fights over small symbolic actions were having the opposite effect: the broader American public was growing convinced that both sides are fucking insane. Mutual distrust and frustration were on the rise.
Well-meaning but strategically foolish, single-issue activists on the right and the left are indeed cannibalizing our communities. Unable to succeed by winning friends, they opt for scorched earth approaches demeaning entire communities as 100% enemy if they’re only 99% friend. Instead of making a difference on the real halls of power — Congress, major Jewish organizations, secret right-wing funders, the Israeli electorate, Palestinian militants — we’re arguing over a candle lighting at a queer convention. These shrill actors are burning down the village in which we all live — not to mention the relationships we rely on for more issues than just Israel-Palestine.
But the Israel Brand Group, the largest study of public opinion on Israel-Palestine, did not ask Americans their support or lack thereof on specific Israeli policies or solutions. It examined whether Americans view Israelis and Palestinians as “good people at heart.” That is what was declining. Swaths of Americans are more certain that Israeli Jews and Palestinians are actually pretty repugnant peoples. Irreconcilable, incompetent, hateful, myopic, vengeful, petty, and dismissive of their opponent’s human dignity. In effect, a reflection of everything pro-Israel and pro-Palestinian advocates embodied themselves.
[pullquote align=left] What friends were won at #CC16? How many were lost?
[/pullquote]To most people, Creating Change is about more than just Israel-Palestine. But to a few, those issues are a side-show to Israel-Palestine. Every space, every community, every institution needs to be polarized, relationships shreded, and mini-Netanyahus (or Hitlers) identified. Some are willing to even tear down the very homes they live in. But most of us recognize that the best, most talented movement organizing is not won by shaming enemies, but by winning them as allies. What friends were won at #CC16? How many were lost?
Not only did the #CancelPinkwashing authors blow A Wider Bridge ridiculously out of proportion — and lose mightily! But now everyone at Creating Change is right to believe that pro-Palestinian (and many pro-Israel advocates) care more about their own obsessions than the good of the queer liberation or anti-occupation movements.